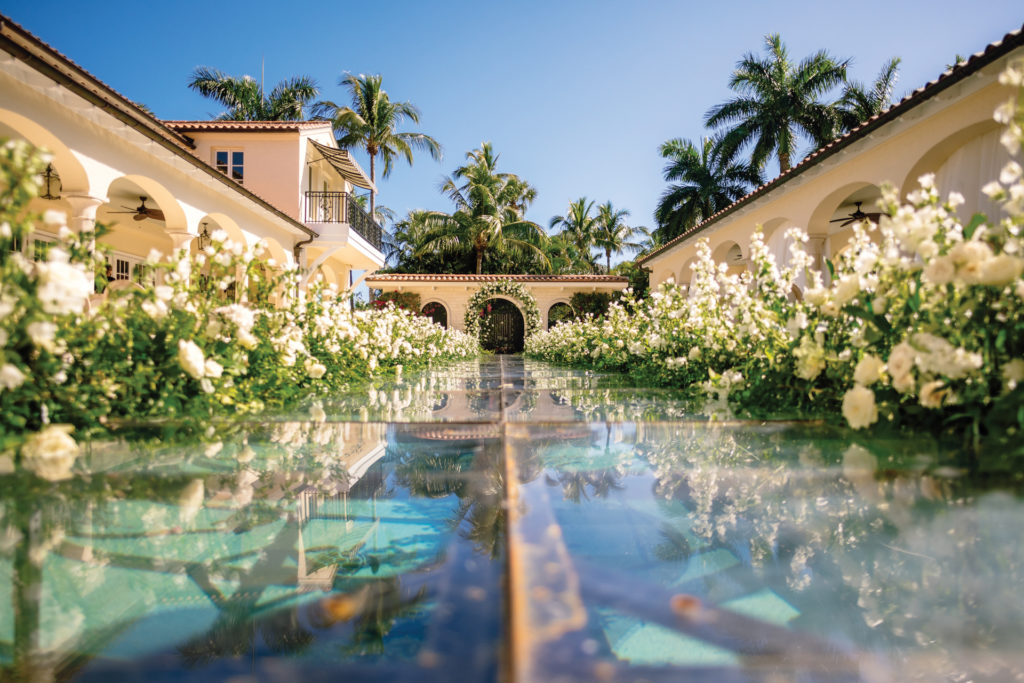 Dante and Hillary dreamed of marrying at the 1926 estate. The aisle was a sheet of acrylic that stretched across the historic pool. With its manicured gardens, large lawn stretching down to the Gulf and Mediterranean Revival architecture, the property provided a romantic backdrop. (Photography by Matt Steeves)

When Hillary Boss and Dante DiSabato started dating, ‘location, location, location’ made things difficult. She lived on Florida’s east coast, and he lived in Naples. But they both ‘knew’ the moment they met that this relationship was going the distance. A year later, she moved to Naples, and the two were engaged.

Hillary and Dante did the couple thing: got a puppy (named Kibbi), discussed the future and admired quality real estate—he, as one of Naples’ most successful realtors with William Raveis Real Estate (he also co-owns Limitless Development), she as an up-and-coming interior designer (now a principal designer with Knot + Tide Interiors). On one of their drives, they noticed the beauty of 670 Gulf Shore Boulevard South, one of the few Port Royal estates designed by famed Mediterranean Revival architect Addison Mizner, known for giving Palm Beach its look. “There is an amazing Old World charm about 670,” Hillary says. For about a year, they kept driving by the 1926 estate, dreaming of a grand wedding on the massive stretch of lush lawn fronting the Gulf of Mexico.

The wedding gods were smiling upon them when Dante hit it off with a fellow Land Rover owner at the dealership. That gentleman and his wife owned 670. They hired Dante to sell the estate but first offered it up for the big day.

If any home in Naples was designed for a wedding, it’s 670, with its fountain-filled courtyard facing Gulf Shore Boulevard South, a dramatic pool and a massive stretch of manicured lawn out back that slips to the beach.

Kehrin Hassan of Jet Set Wed planned the 127-guest wedding. The centerpiece of the ceremony decor was the 80-foot clear acrylic aisle suspended over the estate’s colonnade-wrapped swimming pool. (The setup only caused one incident, when a guest’s chair tumbled into the water before the ceremony. He was fine; his suit was drip-dry.) Floral Symphony covered the aisle in garden roses, ranunculus, stocks and campanulas. Five groomsmen and five bridesmaids walked the raised catwalk at sunset, and Reverend Russ Winn officiated.

Following the estate’s Mediterranean Revival design, Naples-based Tastebuds Catering crafted a menu that leaned Italian, with a four-course meal of farro salad, cacio e pepe, and surf and turf—plus, a four-tier funfetti and carrot cake—two favorites for the couple. During the toasts, groomsman Sean McVay—the Los Angeles Rams coach, who was Dante’s college roommate and attended with his now-wife, actor Veronika Khomyn—gave a particularly riveting speech. As the night progressed, guests took to the dance floor, which went quiet at 10 p.m.—though the party rolled on, with the aid of silent-disco headphones. During dance breaks, the crowd strolled the expansive grounds with its fountains, gardens and sugary sands. The reception featured fire pits with soft-seating arrangements, a bourbon-and-cigar bar, and a bubbly bar with various sparkling wines.

The couple’s honeymoon took them to Amsterdam, Kenya, Tanzania, Mnemba Island and Qatar. By then, Dante had long secured a buyer for the estate. Both the former and new owners attended the wedding. And, location was never an issue for the DiSabatos again.