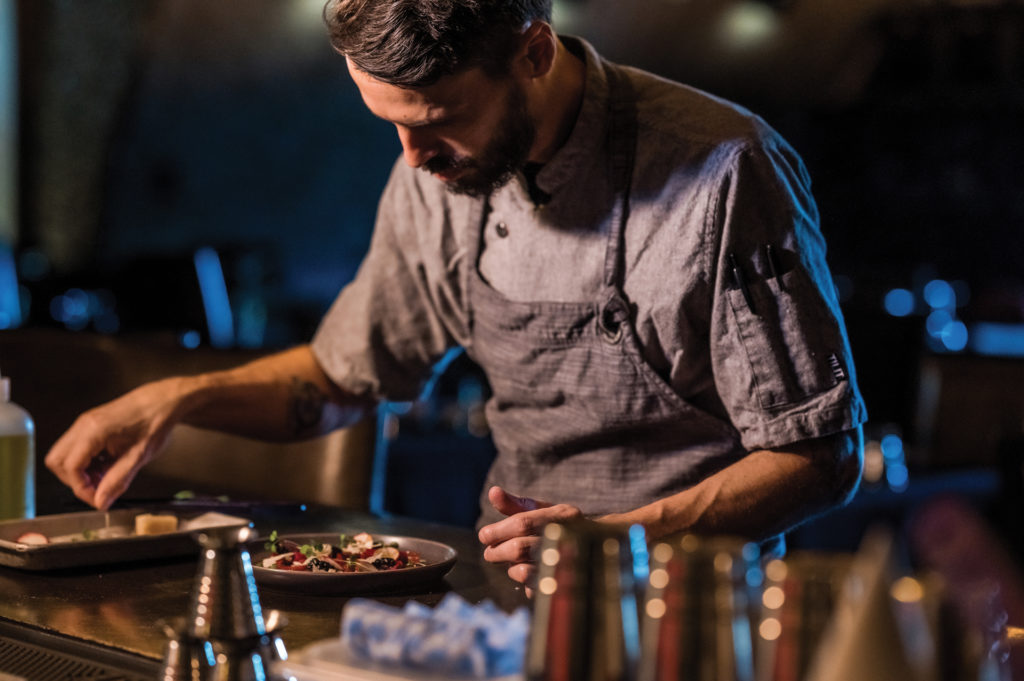 The Missouri-bred chef arrived earlier this year to up The Cave’s culinary ante, taking advantage of the plethora of seafood that surrounds us on the Gulf, farm-fresh ingredients and our region’s robust wine culture. (Photo by Anna Nguyen)

Daniel Swofford’s Grandpa Ross didn’t talk too much. “He was a very old-school country guy and farmer, who’d show affection by showing you things and just spending time with you,” Daniel says. Often, that meant fishing at the local lake near his grandparents’ home in Columbia, Missouri, or along the trout-stocked waters of Montauk State Park during summer break. Growing up between the city and suburbs of St. Louis, Daniel’s main exposure to fish came from those languid afternoons with his grandfather, who passed away two years ago. They’d reel in blue gill, trout, maybe some catfish, all to be crusted up in cornmeal for a classic Midwestern fish fry. Other than those freshwater catches, Daniel says, “I really didn’t know anything about seafood.”

Nearly three decades later, Daniel is surrounded by the ocean’s bounty in Naples. In May, he became the chef of Jim and Laura Dixon’s legendary The Cave Bistro & Wine Bar. While menu mainstays like the epic Caveman Burger and bacon-flecked chicken Marsala meatballs aren’t going anywhere, Daniel’s signature is already noticeable, evidenced by an overall lighter touch, attention to local ingredients and finessed preparations of seafood from waters nearby and abroad—all paired with wines from the Dixons’ stellar collection, of course. “Naples was exactly what I was looking for; it’s a beautiful place to live,” Daniel says. But, it’s been a long road to get here.

Talk to any chef, and there’s a strong chance that cooking wasn’t their initial creative pursuit. Maybe they were in a punk rock band in high school or they had a roll of paintbrushes long before they had a roll of knives. For Daniel, the artistic outlet was writing. He wanted to be a novelist, like his literary heroes Twain and Hemingway, and figured a journalism degree from the University of Missouri would make an effective springboard into fiction. For a job near campus, he started cooking at what he calls a “nice-for-St.-Louis-at-the-time restaurant in the Central West End,” which was then a trendier part of town. “I just fell into it and slowly in love with it. It introduced me to a lot of food and another artistic pursuit working with my hands,” he says. Daniel dropped out of school in December 2005, and that following January, three weeks after turning 20, he moved to New York.

Within three days of landing in Manhattan, a connection from a family friend led Daniel to the Modern, at the Museum of Modern Art, where he started “working at the very bottom” under renowned chef Gabriel Kreuther, who now runs his eponymous two-Michelin-starred restaurant near Bryant Park. “Gabriel is a big Alsatian guy, so [we were working with] lots of hearty food and German influences,” he says. Gabriel also had an affinity for delicate fish preparations: “He made a point of trying to get fish that people wouldn’t necessarily know … [like] rouget and barramundi—things you wouldn’t see most other places in the city.” During his four-and-a-half years there,Daniel cooked through all eight kitchen stations. “Gabriel shaped and really expanded my understanding of cooking and how to handle food, from all the classical French techniques to how to evolve a menu through the seasons,” he says.

After the Modern, Daniel continued to hone his skills at the acclaimed Eleven Madison Park (three Michelin stars) and Dovetail (one star) before moving across the country to Oregon for a change of scenery. He spent the next decade in the Pacific Northwest, cooking in Portland and most recently at Oregon’s only Forbes four-star restaurant, The Painted Lady, in the Willamette Valley, “the high heart of wine country, home to the best pinot noirs in the world, in my opinion,” he says. “My wine knowledge and appreciation have evolved over the years and are a huge part of dining. The connection with the Naples Wine Collection was a big component in my taking the job at the Cave, where we have access to basically any wines we want.”

Daniel’s creativity shines brightest in developing weekly paired menus. Tasting with sommelier and general manager Olga Khorunzha is his starting point for creating dishes and playing with ideas, some of which come straight out of our waters. “In Naples, we have access to so much incredible fish and shellfish, and that’s really fun for me,” he says. Grandpa Ross might not recognize his grandson’s local rock lobster with radishes, caviar and a froth of yuzu-ginger lobster stock, or the lush purple heirloom grits crowned with pink shrimp from the Keys, but he would certainly be proud.