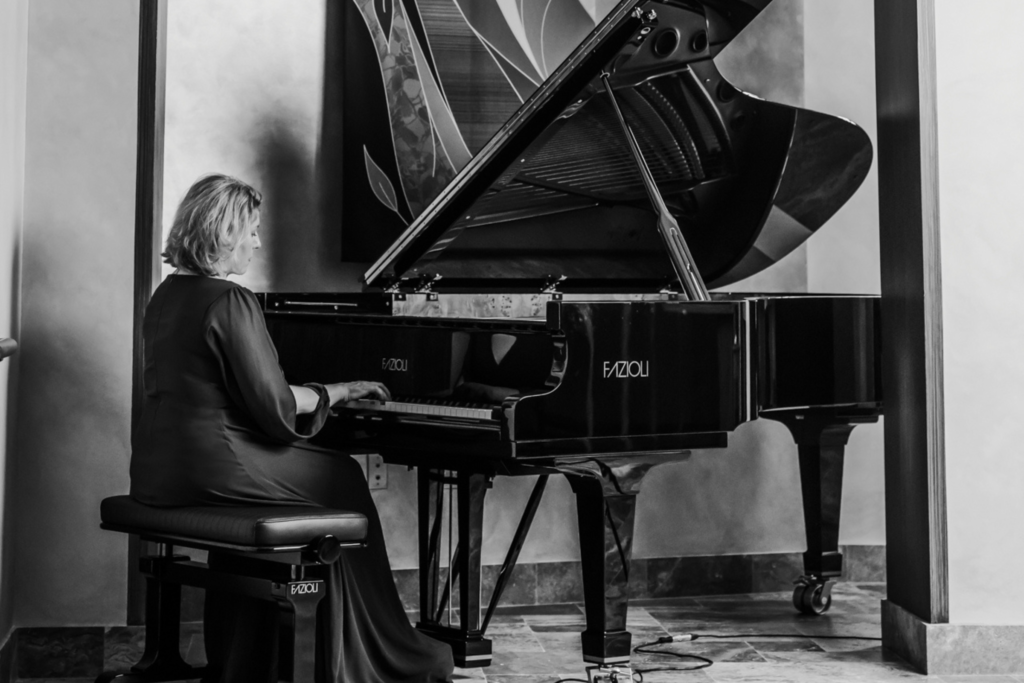 For Milana Strezeva, pursuing a career in the arts comes as no surprise to anyone familiar with her upbringing. Born in Moldova to parents immersed in classical music—her father was an accomplished clarinetist and her mother a world-renowned opera singer—Milana took up piano at 5 years old. Before long, she was performing chamber music concerts with her family. By age 11, she had filled in for her mother’s pianist, playing Franz Schubert’s “Ave Maria” after only a few hours of preparation. “When they throw you into the pool and say, ‘Swim.’ It was kind of like that,” she says, with a laugh.

When she was a teenager, Milana and her parents moved to Sarasota, where she finished high school. “That community was incredibly generous and loved the arts, but it was a very different school experience, ” Milana recalls, explaining how she struggled to adjust to traditional American schooling after attending a highly selective, specialized academy for gifted students in Moldova. A few years later, she headed to New York City to accept a full scholarship to The Juilliard School, where she earned bachelor’s and master’s degrees in music and piano performance. “Not until I got to The Juilliard School did I feel like I was among people I related to,” she says. “It was an absolutely phenomenal experience.”

In New York, some of her most impactful moments occurred away from the classroom and rehearsal studio. Milana watched live performances at The Metropolitan Opera and saw the Berlin Philharmonic at Carnegie Hall—a performance that still resonates. “They brought the complete symphonies of Brahms,” she says. “That stands out in my memory so clearly. It was a mind-blowing experience.”

Fast-forward several decades—past her performances at Carnegie Hall, and an international tour with stops in South Africa, China and Australia—and Milana returned to Southwest Florida. In 2016, she co-founded the Grand Piano Series, a nonprofit organization intent on presenting exceptional concerts with top talent. In essence, Milana wants to bring compelling live musical experiences, like those she enjoyed as a student in New York, to local residents, from elementary school children to seniors. “Music is a living thing, and it has to be felt. When you hear a string quartet or an amazing singer, the feeling you get when you’re 10 feet away from the performer, it’s incredible,” she says. “There’s so much energy being transferred to the audience; it’s really moving.”

Milana and series co-founder Raniero Tazzi, who previously arranged a tour with the Royal Philharmonic Orchestra, use their industry relationships to lure virtuosos to the region. Eric Lu, the Gold Prize winner of the prestigious Leeds International Piano Competition, played a concert in 2018. And this March, world-renowned Irish pianist Barry Douglas plays a recital in the auditorium at St. Leo the Great Catholic Church in Bonita Springs. Adding to the allure for pianists is the organization’s Fazioli F308, an exceptional grand piano measuring more than 10 feet in length, with a soundboard made of red spruce sourced from Italy’s Trentino province. (It’s the same wood the Stradivari family used to craft its sought-after violins.) Known for its power and harmonic richness, the instrument is so rare that the Grand Piano Series is one of only seven institutions in the United States to own one. “When audiences hear a phenomenal artist on a phenomenal instrument, the impact is powerful,” Milana says.

While one arm of the Grand Piano Series is to secure world-class musicians to play concertos and sonatas each season, the other is to ensure those performances are accessible. This season, concerts are held at St. Leo church, Moorings Presbyterian Church and Trinity-by-the-Cove in Naples and the Gulf Theater at the Military Heritage Museum in Punta Gorda. In the wake of Hurricane Ian, Milana waived the ticket fee, encouraging patrons to donate to Collaboratory, United Way or Collier Community Foundation instead.

In regular seasons, Grand Piano Series offers free tickets to special needs groups and disadvantaged families, and hosts concerts and lectures at senior centers and special-care facilities. To reach kids without access to strong arts programs, they partner with two Title 1 schools—Bonita Springs Elementary and Calusa Park Elementary—for monthly performances. “[The students are] so curious and receptive,” Milana says. “They’ll have fantastic questions, and they’ll be engaged. When they don’t want you to leave and when you see a spark in their eyes, you know you’ve made an impact.”

Milana’s key objective is to pique the interest of people who might not otherwise witness live classical music. After graduating from Juilliard, she spent years touring with the Manhattan Piano Trio, playing concerts in small towns like Albany, Texas (population: less than 2,000). “So many artists focus on the major venues, like Carnegie Hall, but the most exciting part is reaching new audiences and learning about new parts of the country,” says Milana, who still performs a handful of chamber music recitals each year. “The opportunity to have played in small towns around the country has given me a really clear idea of how incredible the people are in the smaller communities and how generous they are. It’s the heart and soul of our country.”