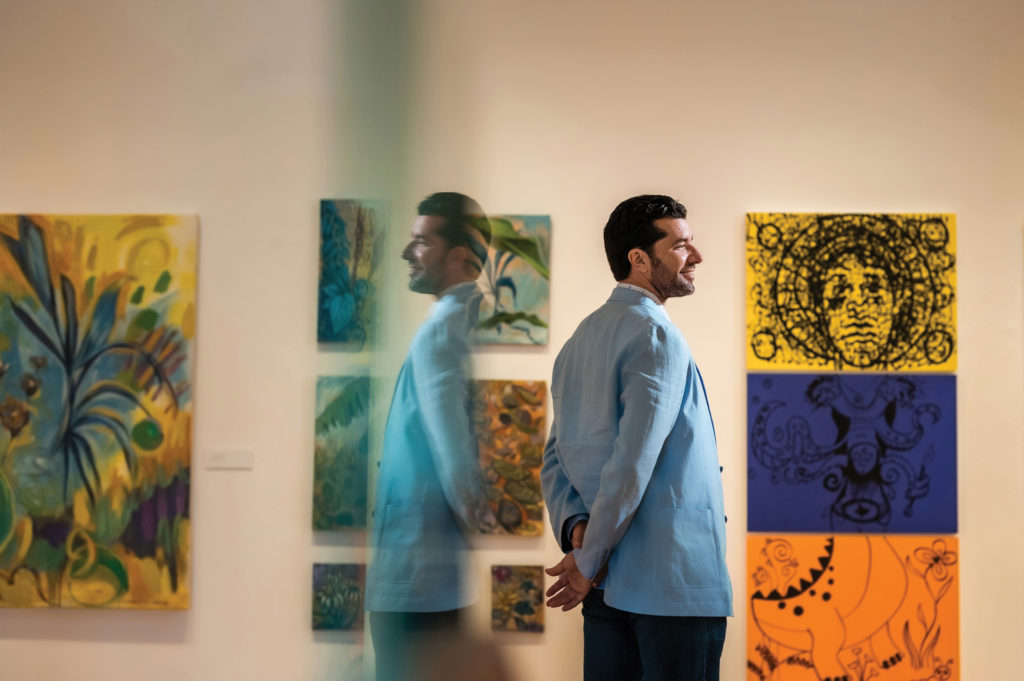 John aims to inspire independent thought and spark dialogue among students and community members through the campus’ permanent collection and shows. (Photography by Anna Nguyen)

John Loscuito, the gallery director at Florida Gulf Coast University (FGCU), recalls how he pored over comic books growing up. “It was probably as much a place to absorb myself in my own world or fantasy as it was an interest in its artform,” he says. “My leanings went more toward the independent publishers rather than DC and Marvel. It was a way to understand the different perspectives and independent voices out there.”

Now, John brings maverick points of view to FGCU through the artists he exhibits in galleries and other spaces across the Fort Myers campus. He’s responsible for developing and organizing the gallery programming, inviting artists to show works that spark debate and encourage conversations among the student population and curious community members. “We don’t necessarily have to answer the question,” he says. “We can focus more on the questions than the answers.”

The Wisconsin native stepped into his current role in January 2014. After getting his bachelor’s and master’s degrees in the arts in drawing and painting from the University of Wisconsin-Milwaukee, John landed a job as a registrar (the person who oversees an art collection’s documentation and logistics) at Marquette University’s Haggerty Museum of Art. The university’s nearby College of Business Administration piqued his interest as a way to make himself more valuable in the role. “I took a leap, and it was a pivotal point in my life,” he says.

John brings his business acumen to FCGU, where he’s transforming the unassuming campus gallery into a serious collecting institution. Not long after he started, he asked Carol Littleton Shay—the daughter of renowned printmaker and glass artist Harvey Littleton—to consider donating the 60-plus contemporary artworks she’d gifted to the university. “Even though we’d had gifts in the past, there was no formal idea that we were going to build a permanent collection,” he says. “Once her gift happened, that mission became grounded.”

A permanent art collection gives a university academic and cultural clout, adding a curatorial focus to the school’s arts programming. Now that John has grown the collection to around 2,500 objects, including paintings by contemporary heavyweight Purvis Young (gifted by Miami’s Rubell Family Collection), a bigger footprint is needed to store and share the artwork. “The state of Florida owns the art at a public university, so we need a good environment to honor those works and make them available to the public,” he says. “Our ambitions are to expand our gallery space and become a museum.”

In the meantime, John scouts artists to exhibit at FGCU by keeping tabs on what’s happening in the art world, internationally and in his own backyard. “It’s pretty organic, and it’s a long game,” he says, referring to the studio visits, budget proposals and loan agreements involved in bringing an artist to campus. The process can be drawn out over years. The role also entails travel, including to high-caliber, blue-chip art fairs. Last May, he flew to the Venice Biennale in Italy, and he attends Miami’s art fairs every December. Rather than focusing solely on the flagship Art Basel, he spends ample time at smaller satellite fairs, like CONTEXT.

Recent exhibits at FGCU have focused on social and political advocacy, including shows by Enrique Chagoya and Travis Somerville, whose artworks tackle immigration and race, respectively.

This month, Carmelo Blandino’s solo show Bloom Ka-Pow! debuts at the Wasmer Art Gallery with the Naples-based artist’s trademark punchy florals. “I needed to exhibit an artist who showed the pleasure of painting,” John says. “Not just for the sake of countering the more hard-hitting political artists, but for students who were interested in large-scale, expressive painting.”

Whether the artwork he curates focuses on thorny current events or the unbridled joy of slinging paint onto canvas, it’s all about uncensored storytelling. “Growing up exposed to mainstream outlets, I needed an underground way to get different perspectives on what’s possible, normal or even imaginable,” John says. “That opened me up to a lot of independent thinking.” Now he pays the inspiration forward.