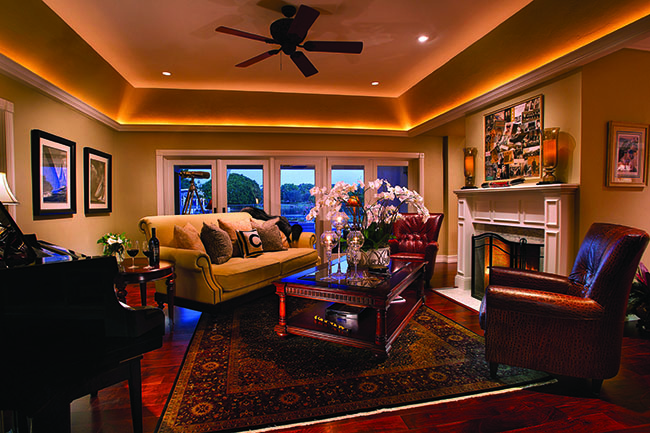 Lonnie and Kathy Custer had shopped the Naples real estate market for a while before they discovered a secluded gem in desperate need of some work. The mid-century ranch, just three blocks from the
beach, had been enlarged with multiple additions through the years. Yet, it took the vision of its new owners to guide this home’s elegant transformation to finally make it seem complete.

New and old rooms of the house varied drastically in their sizes and styles. In the original section of the home, rooms were small and some ceilings were low. The kitchen had a soffit that oddly resembled a small wing of an airplane. The restorative project didn’t frighten the Custers, though. The couple has built three new homes together and renovated three others. Naples residents for the last 10 years, they quickly realized they had found their next challenge.

They brought on Rick Vogelgesang of West Bay Homes, as well as Rick’s wife, Kelli, and her partner, Megan Rozin—who are known as the Magnolia Pair designers.

“We probed and discovered some partition walls that opened up rooms and light together,” Rick Vogelgesang explains. “General cosmetic renovations throughout the home pulled everything
together very nicely.”

Today, the Custers are content. Once the home was finished and a pool cage removed, their surrounding pie-shaped lot on the edge of a small lake underwent a park-like restoration. “We enjoy doing it,” Kathy says of the renovation process. Inside, her favorite space is a former carport-turned butler’s pantry and den , where hints of the original home’s modest past are still evident.

“The house really has good bones,” he says. “It’s solid.”

After the Vineyard
The Custers added an expansive wine room in space borrowed from the garage's workshop. "We just enjoy good wine and collect what we like, but are always trying something new," Kathy explains. The couple's favorite wine region to date is Australia's Barossa Valley.

Kitchen Remix
Midway through the renovation, Rick Vogelgesang removed an odd kitchen soffit to significantly increase the room’s height. “A large obstructive soffi t choked the kitchen off from the living room and all the natural light that came with it,” he explains. The additional space called for an extra layer of storage at the top, where new cabinets were installed. The designers then strategically suggested glassed fronts and some glass shelving to capture the light now coming into the space. Cabinets were painted in coordinating colors of gray and white.

Welcome Home
Few homes are originally built with the luxurious spaces that have been integrated into thisdwelling due to its multiple additions. This large, secondary entrance is a passage from the front of the home to its rear pool area and from the original dwelling to the garage addition, with stairs that lead to a second floor guest suite and media room.