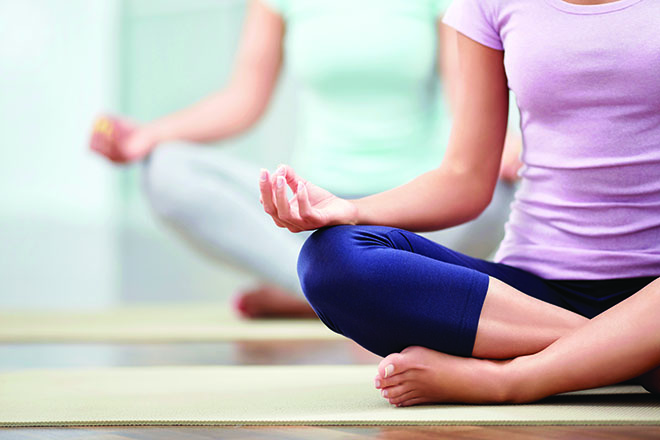 At some point in the very recent past, Mercato became the center of everything. We don’t know when, specifically, it happened, but if we can get our yoga on in the same place we go to the movies and get our groceries, stick a fork in us—we’re done. Of course, this is possible thanks only to the new Yoga Loft, which just took up residence a couple of doors down from Masa. Owners Michael Schaeffer and Amy Lucky are well-known to local purveyors of bending, having taught and practiced here for years. Schaeffer, 32, is a former investment banker who found yoga to be a great release from the pressures of a high-stress job. It worked so well he left banking to take up yoga full time. For her part, Lucky trained with Jonny Kest at The Center for Yoga in Detroit. The 3,000-square-foot studio has two classrooms and will include 1,000 square feet of retail space dedicated to athletic wear for women, including Lucy active wear. yogaloftnaples.com

BE AWARE… Aside from skin cancer, breast cancer is the most common cancer in women. Only lung cancer causes more deaths.

To read the entire article, pick up Gulfshore Life at select newsstands or purchase a copy of the digital edition. A full version of the story will be available on July 1. Or subscribe now to Southwest Florida's leading magazine.

THE POWER OF VITAMIN D—AND SUNSHINE

Two new studies show that people with low levels of vitamin D are more likely to die from cancer and heart disease. In addition, the large meta-analysis studies published in BMJ showed those same people are also more likely to suffer from other illnesses. Yikes. One of the studies, authored by scientists at Harvard, found strong evidence that the vitamin protects against major diseases. Case in point: Those with low levels had a 35 percent increased risk of death by heart disease, a 14 percent greater risk of death from cancer and an overall greater mortality risk. The other study (by researchers at Stanford and several European universities) found evidence that vitamin D protects against diabetes, strokes, hypertension and other illnesses. Those same researchers aren’t ready to suggest widespread supplementation, however. A healthy diet and 30 minutes of sunshine twice a week should do the trick. Good thing we live in Florida.

THE SOUND OF SUCCESS

Consider this a love/hate relationship. We love technology and gadgets, but hate working out. So when we spotted the iriverOn personal trainer, we knew we were going to love it right up until the moment it told us we were slackers. The super-lightweight multifunction device has a voice feedback that tells you your current heart-rate zone, gives you real-time data from fitness programs and then provides feedback for you to review. It knows everything from calories burned to speed, distance traveled and elevation. It even streams music wirelessly via Bluetooth and lets you take calls while working up a sweat. $199. iriverinc.com

A TABLET FOR OUR ALLERGY

Leave it to science to ruin the best excuse for not cutting the grass—allergies. The Food and Drug Administration just approved Oralair, the first allergy immunotherapy tablet for use in the United States. The pill, just like allergy shots, helps the body gradually become accustomed to allergens. It’s also immensely more convenient than shots. Weirdly, but perhaps not surprising, the pills are made up of freeze-dried grass extracts, and they need to be taken daily months before mowing season begins. They contain the strains of five different types of grass—but don’t do a thing for people allergic to tree pollen or mold or other allergens. Still, it’ll be nice to see the neighbors’ house again.

CHOLESTEROL BUSTERS… We know that beans, lentils, peas and chickpeas are excellent sources of fiber and protein, but a new review published in the Canadian Medical Association Journal shows that a daily serving can lower your LDL cholesterol by 5 percent.

Google knows how you feel. Researchers recently counted queries about health-related terms—headache, back pain, upset stomach, etc.—and examined how those queries changed during the recession from 2008 to 2011. The study, which was published in The American Journal of Preventive Medicine, found searches for stomach ulcer symptoms shot up 228 percent with 1.48 million extra hits and headache searches up 193 percent. If we were Tylenol, we’d start advertising on monster.com.

EAT MORE VEGGIES… A new study conducted by scientists in England found that people who ate at least seven servings of vegetables a day cut their risk of premature death by 42 percent. FYI, a serving is just under 3 ounces.