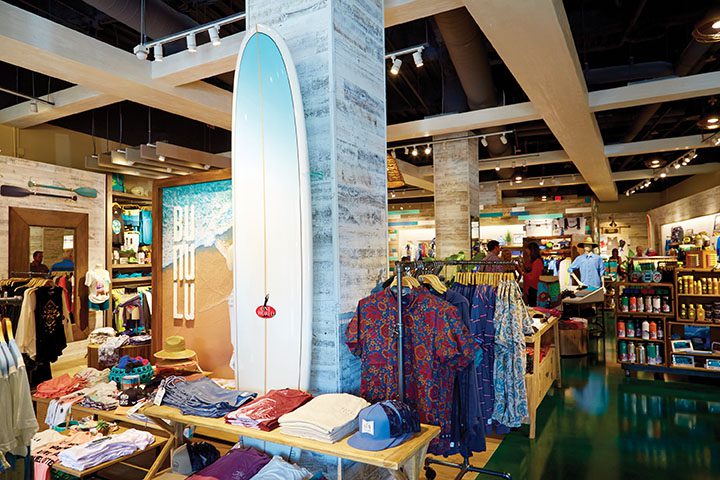 It’s not your imagination: you are seeing more people dressed in yoga pants at the grocery store and coffee shop. Heck, you may even be donning a pair yourself right now.

Leisurely athletic wear (aka “athleisure” wear) that can be sported in and out of the gym is increasingly recognized on and off the runway, and a new store is tailored to suit active Floridians.

Bunulu—a division of Bealls Inc. whose name stems from an aboriginal word meaning “place of water”—developed after Bealls Department Store President Lorna Nagler noticed a void in the marketplace to serve a lively coastal lifestyle.

“It really became apparent to me that there wasn’t a store that could really serve us with fashion and function in one place,” she says.The company opened its first store in August at Coconut Point in Estero. It served up live entertainment, yoga demonstrations and a craft beer tasting  for the grand opening.

Equipped with a creative mix of authentic brands such as Under Armour, Patagonia and Columbia Sportswear, and lesser-known products from the likes of Duvin, OluKai, Trina Turk and more, the company aims to seamlessly carry residents from workout to work to boating to dinner (yes, action-packed days like this are possible on the coast).

The 4,000-square-foot store is merchandised to make shopping for a head-to-toe ensemble part of the fun.

“It’s not necessarily organized by the brand,” Nagler says. “It’s really organized by lifestyle and use. How we’ve curated the brands and pulled together lifestyles within the store is a unique experience that allows us to show the customers what we think works best.”

That can mean finding a table arranged with a sun-proof T-shirt and fitted sweat-shorts, Ray-Bans, sandals and sun balm to boot. In addition to men’s and women’s apparel and accessories, the shop sells adventure gear like GoPros.

Nagler says the choice to introduce the concept in Estero was an easy one. “We picked Coconut Point because it’s the kind of center that has a great draw of customers and brands,” she says. “We’re really in the kind of area that draws youth-minded customers that really embrace the outdoors.”

Bunulu is planning to broaden its reach throughout the state. Two more stores are currently under construction—one in Jacksonville and one in West Palm Beach. “We are looking for additional locations in Florida as we speak,” Nagler says.

While loft may no longer be at the Waterside Shops in Naples, its sister store Ann Taylor has kept the silky blouses and sleek trousers coming for women since it migrated from its 8,133-square-foot location in the open-air mall to the abandoned LOFT space in October.

Kellie Jacoby, who handles marketing for Waterside Shops, says the two confirmed retailers will “create a different matrix of merchandise” within the mall.

Vineyard Vines, founded by a pair of brothers who routinely spent summers on Martha’s Vineyard, is set to open this month. Its classic preppy clothing served with a distinctive beachside twist “is just right for the Naples market,” Jacoby says.

The brand—selling men’s, women’s and children’s clothing and accessories—can already be found in Nordstrom at Waterside, but the new, 3,112-square-foot location will serve as its first in the area.

Women can get their free-spirited fix at Johnny Was when it opens in December. The bohemian brand, whose name is inspired by a Bob Marley song, sells a mix of modern and vintage-style clothing and accessories. “Johnny Was is a little bit of a younger, more urban kind of dressing. It’s a little more of an entry-level price point as well,” Jacoby says. The 1,499-square-foot boutique will serve as the retailer’s first Florida location.

The much-beloved Naples Pier is taking a cue from the city’s burgeoning aesthetic scene and getting a face-lift. The planks are being replaced with long-lasting Brazilian ipe wood, new stairs are being added on the south side, and new lighting will be turtle-friendly for those amphibian hatchlings.

And, speaking of waterfront structures, the Edison & Ford Winter Estates in Fort Myers are re-creating the pavilion where the famous inventors used to entertain, relax and no doubt scheme up new creations. Administrators hope it will be ready by February, in time for the city’s annual Edison Festival of Light.

For a very different kind of entertainment, gun enthusiasts are re-taking the Alamo, a new gun range and retail shop in North Naples that puts high-end polish on recreational shooting. Members get access to a private second-floor VIP lounge that features leather couches, artwork, plasma TVs, a bar and meeting space.

Part-time residents and returning visitors to Estero can gawk at the new development in this newly incorporated “village,” including the looming Hertz global headquarters on U.S. 41, the long-disputed Walmart near Estero Parkway along with new residential communities, including the Springs at Estero apartments adjacent to Germain Arena—which no doubt will throw seasonal residents for a loop the next time they catch a show or hockey game. Yes, you are really in the right place!

Bonita Springs just got a little “más bonita” with two massive new streetscape projects—one spanning U.S. 41 from Estero to the Collier County line and the other along East Terry Street from Old 41 to Imperial Street. The two projects, costing about $2.4 million, will feature 728 new hardwood trees, 908 new palm trees and a state-of-the-art, water-conserving irrigation system. Meanwhile, the city has started a downtown redevelopment project that will add new roundabouts, streetscapes, parking and storm-water drainage.

Visitors to Fort Myers Beach, be forewarned: Estero Boulevard—the island’s main thoroughfare—is under construction and will be for the conceivable future. The town and county embarked on a major project last summer to replace outdated water and gas lines, add and widen sidewalks, and install a much-needed turn lane.

“I think the thing people need to hear is it’s never a good thing to have to wait. But we have infrastructure that has been in there since 1950s, and we have pipes that are literally falling apart,” says Town Manager Don Stilwell. “We are trying to make this as seamless as possible.” 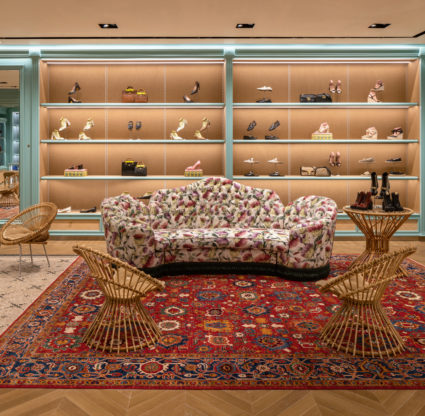 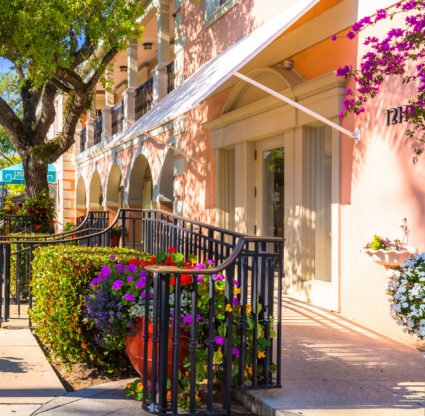 Consider these the places to elevate your style. 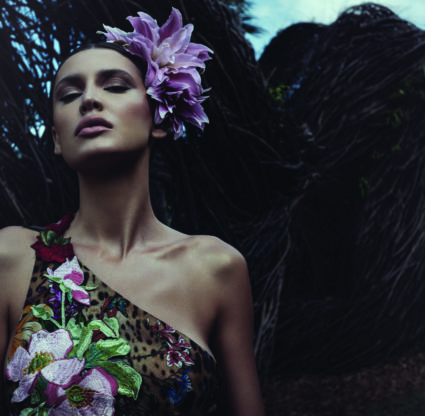