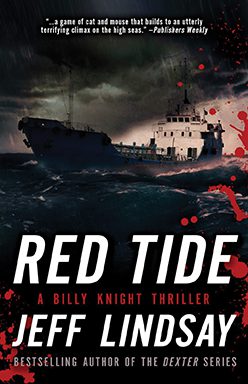 Author Jeff Lindsay was born and raised in Florida. And, he's taken a liking to setting his novels in his home state. Here are a few colorful selections, to say the least, that describe this odd state of ours.

“There is something strange and disarming about looking at a homicide scene in the bright daylight of the Miami sun. It makes the most grotesque killings look antiseptic, staged. Like you’re in a new and daring section of Disney World. Dahmer Land. Come ride the refrigerator. Please hurl your lunch in the designated containers only.”

“There is nothing quite like being in love in Key West. Just walking down Duval Street can feel more alive than you have ever felt before, like God loves you more than other people and everything you do will always turn out all right. You can almost hear the music playing, and you begin to believe that you are Gene Kelly.

And when the fairy dust wears off there’s nothing worse than love dying in Key West. On the passionate canvas of the tropics the brush strokes are brighter, harder-edged. They hurt more. Everyone holds hands in Key West, and if your hand is empty you feel it more.”

“I took in a slow lungful of air through my nose. There was nothing to smell beyond the mingled odors of cooking, the tang of distant rainfall, the whiff of rotting vegetation that always lurked in the South Florida night.”

“There’s a special word for anybody who drives a car in Key West: tourist. Real Conchs have battered bicycles with large, American seats and those high handlebars that every kid in the country lusted after in 1966. With the high handlebars it’s a lot easier to stay upright under Key West conditions.”