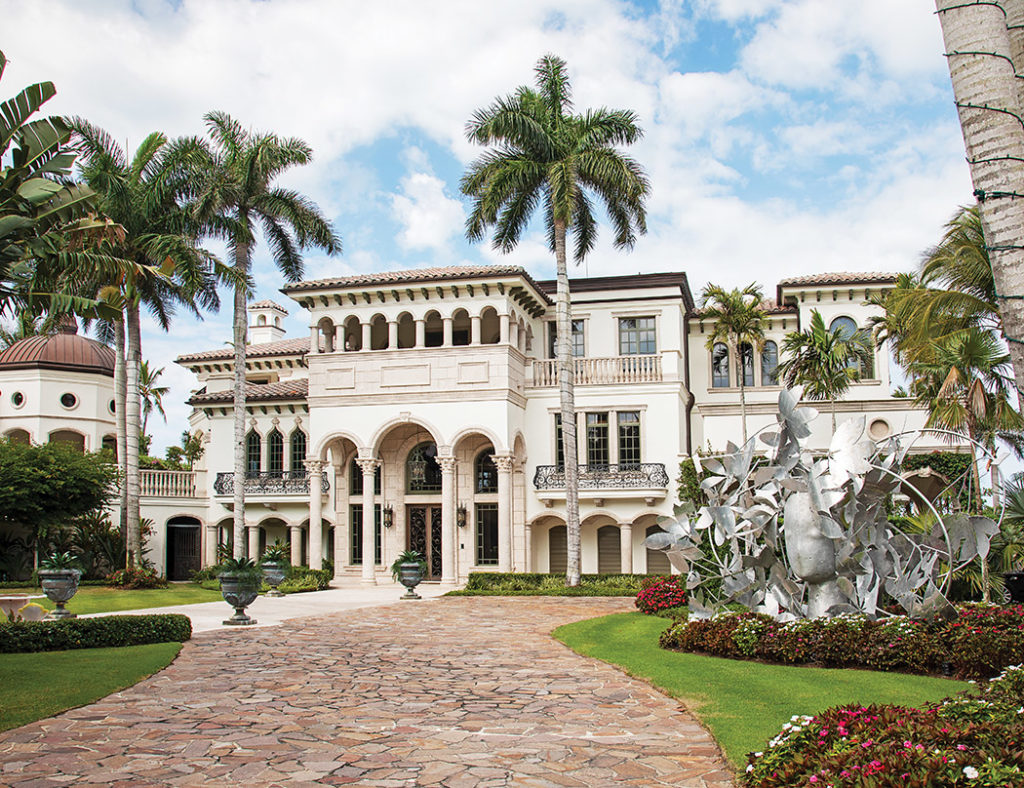 You just want to savor every inch of it. And that’s a lot of inches. From the spectacular gardens to the sheer size and scale of the main house, it is easily one of the premier properties in Southwest Florida. And its current owners have taken their stewardship seriously.

Set on almost 4 acres, the property includes numerous old-growth tropicals, koi ponds, a spacious guest house, large-scale exterior statuary, and, of course, spectacular views of the Gulf of Mexico and its beaches. And while you could spend, quite literally, the entire day just wandering the grounds and appreciating the flora and the exterior angles, it’s inside where the sense of artistry is best enjoyed.

Coming in at more than 17,000 square feet total, the classical-cum-transitional five-bedroom (plus chapel—yes, chapel—media room and library) manse was built at the height of the Tuscan era in 2003. As its current owners tend to lean more toward the modern side of the taste scale, its current state came about more through subtraction, says artisan Chad Jensen of Method & Concept (formerly Thomas Riley Studio), who oversaw interior design duties.

While the craftsmanship was first-class throughout, details such as 18-inch solid wood crown molding didn’t match up with modern preferences, and so cleaner lines made the home lighter, friendlier and more agreeable. 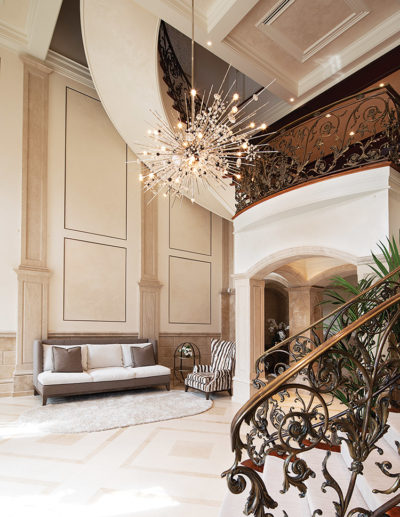 It’s almost hard to imagine that a home this imposing could be welcoming, but walking through its massive front doors deposits guests in a magical foyer with 22-foot-high ceilings and a dramatic curved staircase that wraps elegantly around a custom-made 8-foot-wide Lobmeyr Metropolitan chandelier. (It should be noted that a smaller version hangs in the master bath over a sculptural tub and is the world’s first waterproof Lobmeyr, made exclusively for this property.)

But once guests reach the main floor, their eyes immediately set upon a stunning breakfast nook area with concrete table and eight stools created by New York-based designer Fernando Mastrangleo. Stunningly organic, thanks in large part to its casting marks that are sand-like, the piece is set to capture your attention and then radiate it outward via a hexagon pattern mimicked on both the ceiling and the marble flooring. It continues outward into our favorite bit of excess: the kitchen.

Overlooking the pool and Gulf, the space revolves around a vintage copper La Cornue range the homeowners had in a previous home. Jensen decided to contract La Cornue to create surrounding cabinetry for continuity. If you think that range looks pretty good for being vintage, you’d be right. It has, in fact, never been used. How? Because there is a full caterer’s kitchen directly behind this kitchen, and that’s where all food work is done. This is just for show. But boy, does it show. 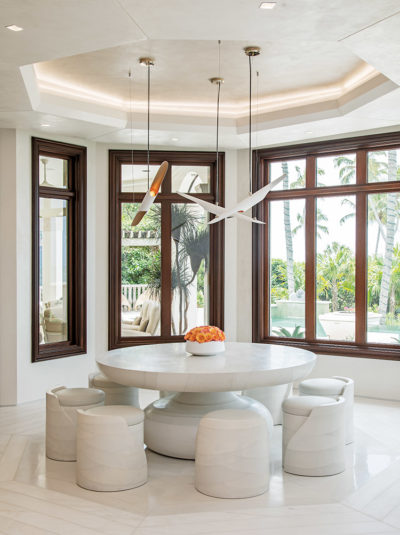 Adjacent to the kitchen is a music room featuring a grand piano lit from above by a mesh topography light sculpture by artist Jason Krugman. The room also features a stunning custom-commissioned acoustic textile wall installation by Ann Kyyro Quinn. From there, eyes tend to gaze out either over the cavernous foyer or over to the elegant living room, which retained its ceiling detail and wood flooring but became home to a rug designed by Jensen that is an aerial map of Versailles. It’s fitting. The room’s furnishings, all Fendi, seem to levitate, allowing for much of the map to be seen and appreciated from anywhere in the room.

“It goes from seating six to 12 with the push of a button,” the homeowner says.

There were no outlets convenient to power the table, so Jensen had it made with Lithium batteries that must be charged occasionally in order to keep things humming but at least keep cords from ruining the atmosphere.

The home’s media room includes another first, in that at the time it was installed, the linear ethanol vent-less fireplace was the largest-ever capacity put in a private home. But whether you are looking at the fireplace or a television, you are never far from art. The back wall is dominated by a nine-piece custom installation of glazed stoneware by Pamela Sunday, while the room’s corners are anchored by Dana Roes’ four-piece Threshold series. 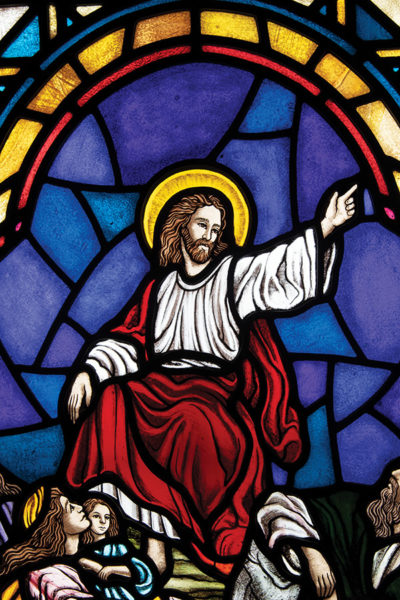 And immediately next door? The home’s own private chapel. Blessed by none other than the president of Boston College, Father William Leahy, the space is a solemn, yet earnest, expression of the owners’ spirituality and their connection to their faith.

“It was a once-in-a-lifetime opportunity,” says Jensen, who did a great deal of research in order to give the room presence. True gothic arches are recessed in both the north and south walls, while an inset cross is backlit. True leaded stained glass windows designed by the homeowner depicts the four stations of the cross and is also backlit. The room’s millwork is remarkable and leaves little doubt that the creator works in mysterious but high-quality ways.

From top to bottom, the home is everything (and more) you think of when you think of the best of Southwest Florida. It is a world-class residence designed to feed the soul with art and inspire worship through the workmanship of another very talented carpenter.