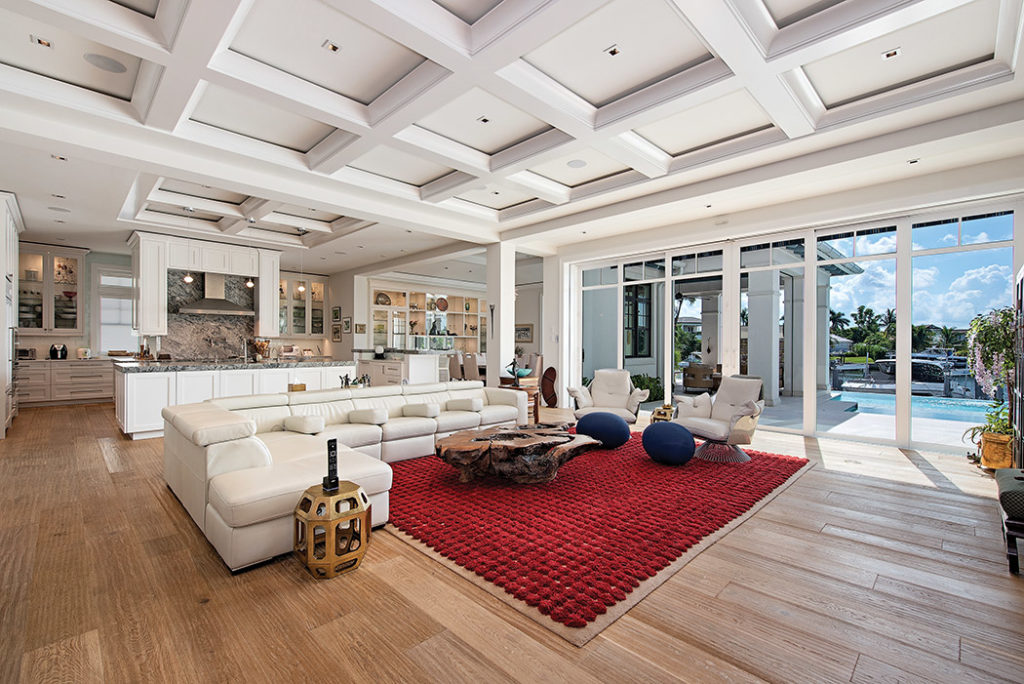 With a nod to contemporary styles, this Park Shore beauty hits all the notes of its homeowners, Massachusetts transplants Jane and Steve Akin.

The home of 7,275 square feet under air (9,235 total),  five bedrooms, five full bathrooms and three half-bathrooms was designed by Stofft Cooney Architects (and built by Toscana Homes). It was originally planned as a seasonal family retreat capable of housing their kids and grandchildren for extended holidays. But before it was even complete, it became clear that the kids found Naples just as appealing as their parents did and would be moving here full-time. So, Jane and Steve decided to make the move full-time as well and instead utilize some of the second-floor guestrooms as bonus perks (a gym and massage room, to name two).

“There’s still room for everyone to be under one roof during the holidays,” Jane says. “Steve and I were corporate gypsies, so even though we don’t plan to sell this place, we always think about marketability.”

Not surprisingly, it’s a space that’s been well-thought-out. From pre-planning Christmas décor to creating an irrigated dog run outside, this is a home created for people who’ve lived in a lot of other homes.

“It’s packed with anything and everything you could put in a house,” Richard Compagnone of Toscana Homes says with a smile. “Most of the rooms have sun shades, but also have bug screens, and blackout shades. All are built-out and concealed. The house is fully automated.” 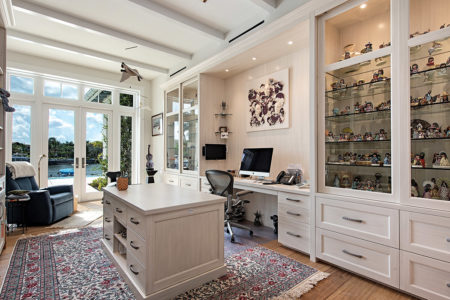 Among the more unique features is a 100-inch television in the great room that slides out from its wall and automatically lowers down over the large linear fireplace to eye level during viewing. In the full caterer’s kitchen, there is a refrigerator with a soda-maker built in. And in the upstairs laundry room (there is also a laundry room on the main floor), there is a dryer with a built-in dryer rack, allowing you to hang your items during the drying process. There’s even a dog room, designed specifically for the Akins’ three very large dogs.

To that end, the leather couch in the great room looks quite contemporary, but it transforms into a reclining mode, making the room a perfect home theater. The red poof carpet was custom-made for the Akins in Massachusetts, while the 300-pound redwood coffee table is the first piece of furniture the pair bought as a couple. It’s been in every house they’ve owned. 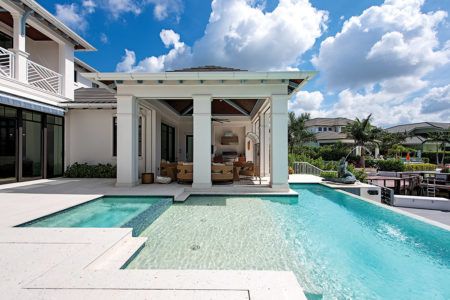 That space is directly off the main kitchen and dining room, which tie together beautifully thanks to stark white cabinetry and thick natural stone surfaces. In fact, the dining table was custom-made from one slab of the same stone.

It also took more than a few people to get the alligator sculpture out back to be aimed properly so that it can spit directly into the swimming pool as intended. But that’s just part of making a house a home. And when you know what you like, it makes everything easier.