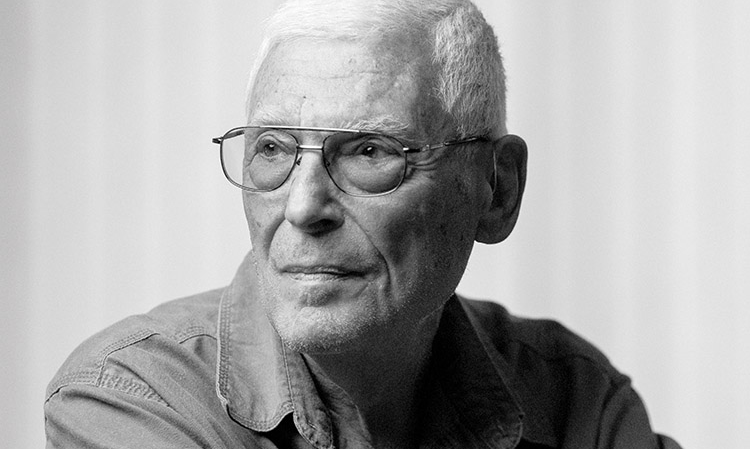 In the office of the Naples home he shares with his wife, Arlene, 84-year-old Joel Banow is sitting in a desk chair, his legs crossed, one hand held thoughtfully to his face. Blue-and-white pieces of Wedgwood sit on the shelves of a glass curio cabinet above his head, and Old West miniatures that Banow painted himself line the top of his bookcase. On one wall hangs a framed poster of Neil Armstrong, and another displays Banow’s 1970 Director’s Guild of America nomination for Outstanding Directorial Achievement in Television. On his desk, behind the framed photos of Banow and Walter Cronkite, sits a 1-inch-by-1-inch model of the lunar surveyor.

This year marks the 50th anniversary of the Apollo 11 mission to the moon, and Banow, as director of space programming at CBS, was the man responsible for bringing the iconic images of the moon landing into American homes. Before I met him, I imagined 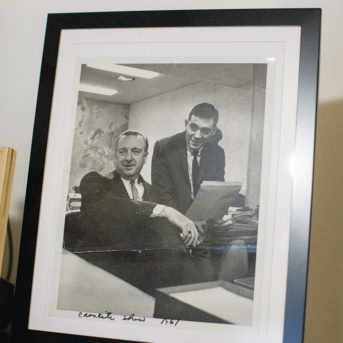 Banow would be a hardboiled broadcast journalist in the traditional vein, gruff-voiced and brusque-mannered. What I discovered was the opposite, a man with an artistic temperament, a love of theater and television, and an intense dedication to the craft of bringing stories to life.

Banow’s 17-year career with CBS began in an unlikely place. As part of a high school English assignment, he had to interview the president or CEO of a corporation.

“I grew up in Brooklyn, went to Abraham Lincoln High School. I was in love with theater and television,” Banow says. “I knew a little bit about the history of CBS, so I picked William Paley, founder of CBS broadcasting.”

On the day of their scheduled interview, Paley was out of town, so Banow spoke to Frank Stanton, president of CBS, instead. The two spent a pleasant 20 minutes together, and at the end of the interview Banow asked, “Would it be possible to see a live television show?” Stanton said, “Sure.”

Banow came back to CBS, this time to the studios, to watch a rehearsal and a live broadcast. When it was done, he thanked the unit director and asked to see another show.

He stayed in touch with the unit director, and after high school, Banow started at New York University to study film and television. But he received his draft notice for Korea soon after enrolling. Instead of waiting to be called up, he enlisted.

“As an enlisted soldier, you can pick your MOS (military occupational specialty),” he says. “I loved anything that had to do with photography, so after basic training they sent me to Fort Belvoir, Virginia, to learn photo lithography.”

From Fort Belvoir, the Army sent Banow to Fort Riley, Kansas, where he was promptly told that the base didn’t need a lithographer. What they could use, however, was someone to manage the broadcast programing on the bedside network, the speakers beside the beds of the soldiers in the base hospital. Banow volunteered to take the night shift, and during the day, when he was off-duty, he took classes in television broadcasting at the nearby University of Kansas. He also got involved in the university’s theater program, helping create sets and performing onstage.

“Oh, that was your New York version of that word,” the director said any time he heard Banow’s Brooklyn-born G’s.

Finally Banow received orders to Korea, where he spent time peeling potatoes on kitchen duty until an old back problem waylaid him. He had to have surgery and wound up in New York City, at a Naval hospital in Queens. After he recovered, he finished out his time in the Army while also working for a summer stock theater company, painting sets and crewing backstage. When his three years in the military were up, Banow took a job with a commercial television station in Boston. He worked there for about a year before reaching out to his old friend at CBS, the unit director who’d allowed him to come back for all those Ed Sullivan shows. Any chance he had a job for him?

Banow started in the CBS film library, not a glamorous job but it gave him access to something invaluable—the CBS jobs bulletin board. In 1961, Banow applied to be a production assistant with the evening news, and he was hired on for the show’s new format, which would go from 15 minutes to a half-hour. The anchor for the 30-minute program would be a man named Walter Cronkite. That same year, President John F. Kennedy called for an ambitious space program to put astronauts on the moon before the end of the decade. While NASA engineers scrambled to figure out how to make that possible, a parallel development was happening in broadcasting. Directors started to ask, “How are we going to put a space mission on the air?”

As the first class of astronauts began preparing for the Mercury program, Banow was promoted from production assistant to associate director in the special events unit created at CBS to produce the network’s space programming. Midway through the Gemini program, he rose to director, and by the time of the Apollo missions he was directing all of CBS’s space programs.

But capturing the space missions on television came with a unique set of challenges.

“When the rocket goes up and out of sight, it becomes just a radio show,” Banow says. “You can’t see anything. You’ve got your correspondent at Cape Canaveral. You’ve got Mission Control. You’ve got the voices of the astronauts. That’s it. Visually, what are you going to put on the screen?”

When it came time to answer that question, Banow turned to his background in theater and set design and drew on his deep well of artistic sensibility. He and his team set out to create what they called “simulations” of what was happening in space. These simulations would become part of the iconic footage from the space programs, the images that people associate with the Mercury, Gemini and Apollo missions.

In the time before computer-generated imagery, Banow and his colleagues relied on old-fashioned film wizardry. They had models built, both large ones like the Mercury capsule, which they dropped from a crane, and miniature ones, like the lunar and command modules of Apollo 11 that they filmed in front of a green screen. A Bunsen burner served as rocket engines and also created the burning and sparking of the spacecraft’s heat shield when it re-entered the atmosphere. Banow hired a former Disney animator to depict the Apollo 11 spacecraft orbiting the moon. While the station waited to receive the first shadowy images of Neil Armstrong walking on the lunar surface, a NASA technician in a hangar in Long Island City, dressed in a spacesuit, simulated Armstrong’s descent from the lunar lander.

Banow used NASA’s mission flight plans, which came with precise time markers for every event of a mission, to schedule his program.

“I’m flying in my studio with my mission with the same exact flight plan that the astronauts have in their cockpits, seeing where all the simulations are going to have to take place,” he says.

As director, he would cut among shots of his reporters, shots of Mission Control and shots of the simulation footage, a great deal of it live and some of it pre-recorded. Whenever one of these last was on the screen, he had the words “simulation” or “animation” displayed.

I have to ask: Did people really know it was simulated?

His work on the Apollo 11 mission, a broadcast that lasted 32 continuous hours, was nominated for a 1970 Directors Guild of America Award.

After his time at CBS, Banow retired to Naples, where he gives lectures through Florida Gulf Coast University’s Renaissance Program and volunteers at the Naples Museum of Military History. He was a founding member of the Naples Press Club, and this year he organized the Naples Space Festival, a monthlong event that ran April through May and brought in CBS reporter Bill Harwood and First Man author James Hansen, among others. Most importantly, Banow continues to collect art. The walls of his Naples home are filled with prints and paintings, and the cabinets hold more of that beautiful Wedgwood. He regards each piece with a connoisseur’s eye, the same eye that guided him to create some of the most lasting images in television.