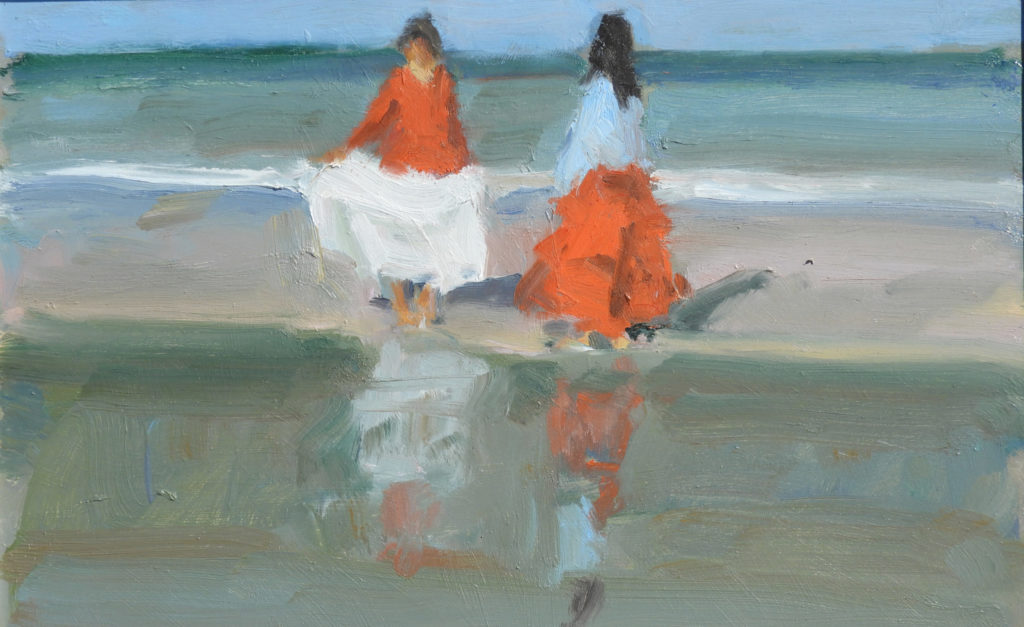 We’re fortunate to live in a region where there is no shortage of world-class theater groups, symphonies, art galleries and museums in our area. The spread of the novel coronavirus has put a damper on most of these plans, though. Gulfshore Playhouse, Florida Rep and Artis—Naples are closed, along with Hertz Arena, Naples Botanical Gardens, our beaches and several other recreational facilities, shopping centers and restaurants.

Yet in a period that feels apocalyptic, many local organizations know that the show must go on. Instead of stopping altogether, people are getting creative in how they deliver experiences. You’ll still find plenty of access to nature, educational opportunities and culture. The arts have some of the most exciting offerings, as groups take their talents to the web, streaming shows and classes at no cost and posting exhibits online. Here are some of our favorite local galleries, theater groups and art centers that are allowing you to appreciate the arts from the safe comfort of your home.

Naples Art: For 32 years, Naples Art has produced one of the most comprehensive and influential art shows in the area with the Naples Downtown Art Show. After canceling this month’s event, the group opted to recreate the exhibit online. Images of the paintings, sculptures and mixed-media pieces that would have been on display are now live on the website, where you can also connect with artists to buy the featured works.

The Naples Players: The theater group is going above-and-beyond in helping connect and serve the community during these shaky times with its online cultural center. Last week, the Players started streaming online classes and fun activities, like a virtual singalong and yoga sessions. In addition to these activities, the Players just launched their Aid for the Arts Concert Series, which will be live-streamed on Facebook starting March 28. Did we mention it’s all free?

Florida Repertory Theatre: While the theater had to cancel its programming for the remainder of the 2019-2020 season, the group found a loophole in making the upcoming productions of “Every Brilliant Thing” and “A Doll’s House, Part 2” available for online streaming for all those who have already purchased tickets. To support Florida Rep, patrons are able to donate their tickets back or apply fees toward future programs. What’s more, the Rep is hosting a virtual version of its fundraising gala on March 28.

Marco Island Center for the Arts: Although limits have been placed on public gatherings, the Marco Island Center for the Arts is making sure its exhibiting artists still get due recognition. The center has published video tours of the “Vanishing Florida” exhibit by photographer Kevin Boldenow, and its “Flash: 50 Years of Fashion” exhibit on its Facebook page. The Center also shared an exhaustive list of all the films introduced during the Art Flicks program, which is typically tied to a theme and sparks discussion. Now is the time to rewatch and reflect on the messages behind each film.

Harmon-Meek Gallery: Harmon-Meek Gallery is also hosting virtual exhibitions to showcase works by visiting artists. The curators have uploaded a series of images of beach-themed paintings by Richard Segalman (for those of you missing your daily dose of the Gulf) and a walk-through tour of Reynier Llanes “Book of Life” exhibit.

Naples Ballet & Company: The instructors at Naples Ballet are ready to teach you how to pirouette, plie and glissade. Well, not quite yet. But they have taken to Facebook to live stream ballet barre classes, and are coaching viewers through what moves and stretches are necessary to build strength and add a little grace to your step.

Fred Astaire Dance Studio: You may not be able to head to the gym or the pickleball courts right now, but you sure can slip on your dancing shoes. Fred Astaire Dance Studio is offering free online dance lessons for local families to keep up with their exercise while at home. Visit the studio’s website to learn the intricacies of ballroom dancing, Latin arm styling and even the namesake line dance from “Singin’ in the Rain.”

Live for Live Music: Live for Live Music, a music media and marketing company, has partnered with the online music channel, Sugarshack Sessions, to feature original, live recordings of diverse music talent on its Instagram page and on Sugarshack’s YouTube channel. All performances on Sugarshack Sessions’ channel are recorded in Bonita Springs—so you can flaunt some local pride with your new summer playlist.

Alliance for the Arts: The much-anticipated annual All-Florida Exhibition is in its 34th year of showcasing a variety of juried works from artists all over the state. While the exhibit ran into a bit of a roadblock following current events, Alliance for the Arts doesn’t disappoint—the organization uploaded the entire exhibition onto its Facebook page, so nobody has to go without the satisfaction of sampling some of the Sunshine State’s best art. All the pieces are for sale, too, so don’t miss the chance to snag one that catches your eye.

DAAS CO-OP Art Gallery and Gifts: The whimsical and surrealist works created by Cuban-born artist Maria Ramona Sanchez are still being exhibited on the gallery’s Facebook page. The gallery has been busy adding more items to its Etsy store, so you can still support the arts from your favorite spot on the couch.

Ocasiocasa: The quirky character sculptures that are brought to life by this husband-wife duo have been spotted locally in Fort Myers’ The Franklin Shops, DAAS CO-OP Gallery and Arts for ACT Gallery, but are now making frequent appearances on the team’s Facebook page. The pieces will entice you to smile, laugh and sometimes look twice, as their penetrating glass eyes seem to glisten with life.

Gardner Colby Gallery: The modern-art gallery is pulling all the stops to make sure its art isn’t lost during the quarantine. In addition to posting video clips and images from the current “Pure Americana” exhibition on Facebook, the team has also created a page of their most comforting installations to soothe the art-admirer’s heart. They are also accepting appointments to visit the gallery—they promise to keep a six-foot distance.

Other Local Galleries: Although most of our galleries are currently shuttered, many have amped their web presence to keep you inspired, while supporting the arts. Paul Arsenault is posting his works, as well as pieces by artists such as James P. Kerr, Clyde Butcher and Mary Parkman, almost daily to his Facebook page. Naples Art District postponed its Art & Design Expo to November, but district artists, such as Dora Knuteson and Michaela Castaldi, are keeping the art alive by sharing photos and videos of their works and works-in-progress. In Lee County, Florida Gulf Coast University Art Galleries uploaded its 22nd Annual Student Juried Exhibition to its Facebook page, while Leoma Lovegrove, whose works are available for purchase on her site, continues to brighten moods with her own vibrant, tropical works, each accompanied with a positive written message. Meanwhile, Tower Gallery, on Sanibel, is taking private appointments, as is Sea Grape Gallery in Punta Gorda.