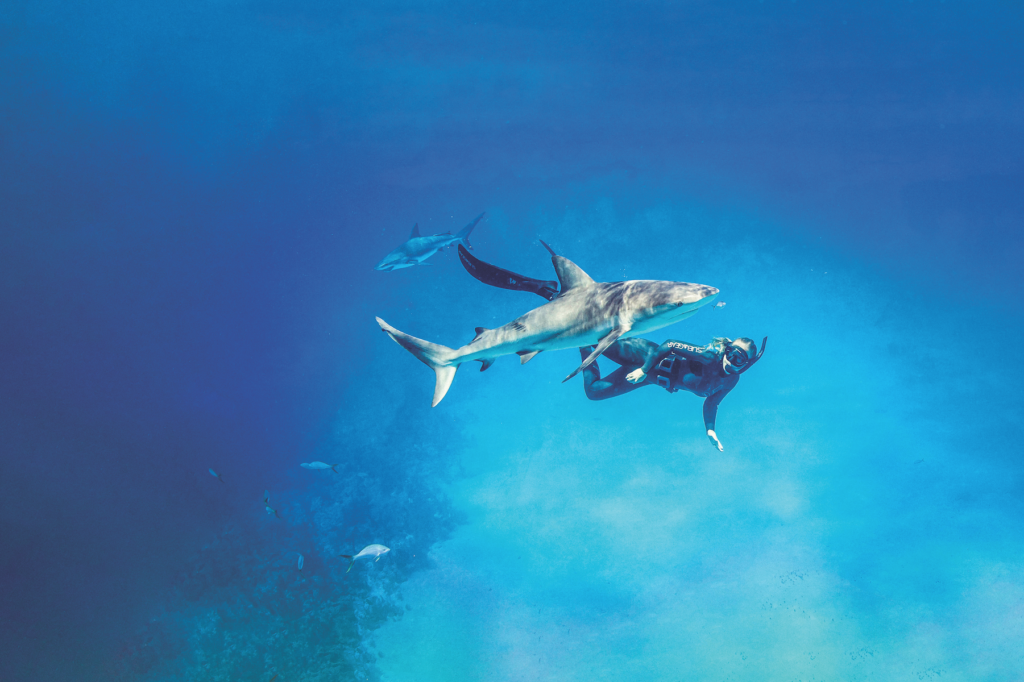 Even though the Gulf of Mexico is home to around 24 shark species, including great whites and nurse sharks, there aren’t too many families that can say they’ve been up close and personal with the prehistoric creatures. The Casagrandes aren’t just any family, though. Andy Brandy Casagrande IV is a world-famous cinematographer. His wife, Emma, is a respected conservationist and photographer. Together, this Naples-based couple has carved out a reputation as the go-to team for capturing must-see footage of some of the world’s most exciting predators, particularly those with dorsal fins and big, toothy grins.

Last month, Discovery Channel aired its 33rd annual Shark Week—which, in recent years, has attracted as many as 35 million viewers with its action-packed footage. Andy, who has more than 100 Shark Week credits to his name, believes the shows’ educational insights have the power to change people’s perspectives on sharks and ocean conservation.

Andy concedes the programming isn’t above using dramatic scenes and clickbait titles, like the 2020 special Tyson vs. Jaws: Rumble on the Reef, to draw in viewers. “Shark Week’s not perfect,” he says. “There’s some hyped-up stuff on there.” But at its core, the programming is educational, providing a front-row seat as Andy and teams of scientists and pro divers do conservation work and share information about the animals’ behaviors.

Mike Tyson’s feature special showcased the high-profile boxer and Andy diving off the coast of the Bahamas to document Tyson (safely and humanely) subduing one of the area’s largest female reef sharks, while a team attaches technology that will help monitor the more than 7-foot-long animal. “When Jaws came out, it created the biggest backlash against sharks,” Andy says. “Yes, the shows use the scare effect to get people to watch, but they’ve also created a cult of people who love sharks so much,” he says. “It’s sort of broken the Jaws effect.”

To this day, the 1975 horror film pops into the minds of people young and old as they wade into even the shallowest of waters. But it’s a fear that Andy says is wholly misplaced. Erasing this stigma is a responsibility he takes seriously. His first encounter with a shark, a friendly 3-foot whitetip reef shark in the Great Barrier Reef, showed Andy that the creatures aren’t constantly on the hunt, as we see on TV. The experience was so underwhelming, he now jokes that he’s far more terrified by an Uber ride to the San Francisco airport than any adventures in the deep. “They are the politest predators in the world,” he says. “Most people I’ve taken shark diving, their biggest epiphany is that they can’t believe how cautious the sharks are. They’re really just trying to coexist.”

Andy says that sharks may be more fearful of humans than the other way around. A study from Dalhousie University in Halifax, Canada, estimates that more than 100 million sharks are killed by humans each year, while the Florida Museum of Natural History’s International Shark Attack File indicates that on average only four people are fatally wounded by sharks in the same amount of time. The animals all have their own personalities, Andy says: “With great whites, they’re literally like people—some of them are super intense; others will just swim right up to the boat, and then one shows up, and it looks like it’s scared of its own shadow.”

The New York City native has spent the last decade circling the globe, filming predators—from king cobras to polar bears to a 19-foot American crocodile—on land and at sea. Through his company ABC4EXPLORE, he documents the animals for networks, including Discovery Channel, National Geographic and British Broadcasting Channel (BBC), and hosts underwater educational excursions. He’s always been interested in sharks, but his Emmy Award-winning career capturing them on film sort of happened by accident. His fascination began as a child, when he saw a shark on TV for the first time; it was furthered by annual trips to his grandparents’ home in Naples, where he would swim in the Gulf. These trips inspired Andy to study marine biology, reading as many books and articles as he could get his hands on as a kid, and later studying the subject in college. He soon realized he was more interested in face-time with the animals than time spent in the lab. “You can write a paper and maybe reach a few thousand researchers, or you can make one film and billions of people around the world can watch it and grasp the idea,” he says.

After earning a degree in psychology with a minor in biology from California State University, Long Beach, and a brief stint in the tech industry, Andy decided to focus on his dream of exploring ocean life. He took on a role as an unpaid researcher in Cape Town, South Africa, studying great whites—a project that had attracted film crews from Discovery Channel and National Geographic. While his main role at the time was to take photos of dorsal fins to identify individuals (each shark’s dorsal fin is unique), his work impressed the Nat Geo producers to the point that they offered him a job on staff. For the next two years, he traveled the continent with the network documenting everything from big cats to elephants. Unexpectedly, Nat Geo also helped him meet the love of his life.

The year was 2007, and Emma had decided to take a vacation with friends from her home country, Sweden, to Tanzania. She had lived in the Democratic Republic of Congo for a short time as a child and was eager to return to the continent. Wanting to experience the environment as the locals do, the women planned to stay at a friend’s run-down cabin in the Serengeti, which happened to be in the same compound as Nat Geo’s research site, where Andy was working. “They were in the Serengeti for three months and hadn’t seen anyone—no tourists, no people at all—and then four girls showed up,” Emma says. 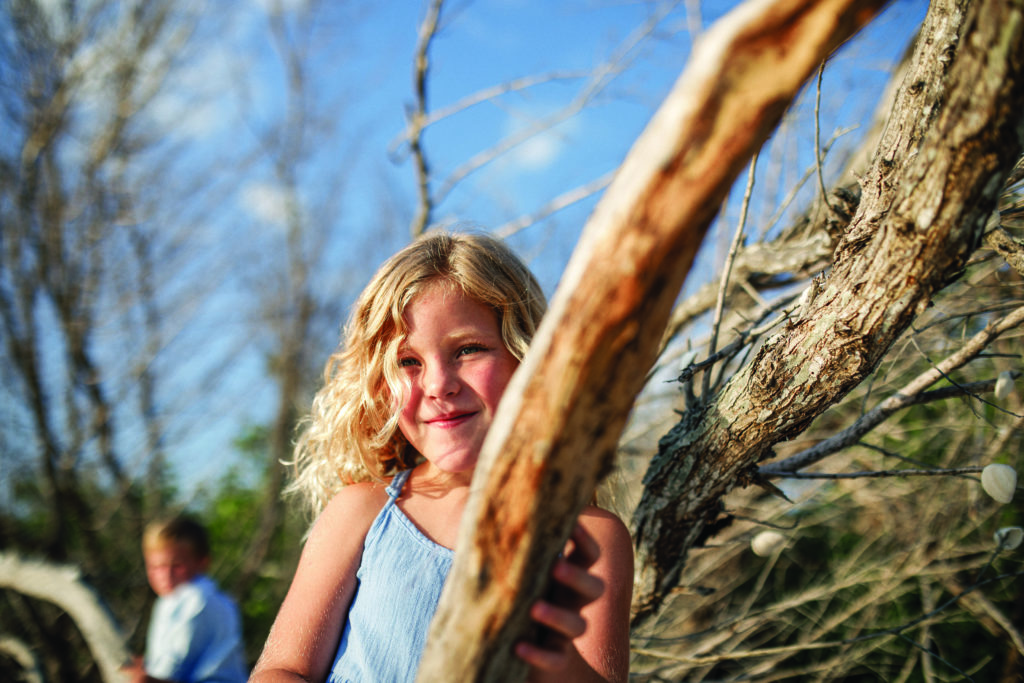 Andy was immediately attracted to her free-spirited nature and love for animals; Emma couldn’t resist Andy’s down-to-earth charm and adventurous lifestyle. Still, they never suspected they were forging something long-term. “I thought I would never see him again. He ‘lived’ all around the world—he didn’t even have a house. He just had a bike in D.C. somewhere,” she says. But the two exchanged numbers and started talking every day. Despite the distance and changing schedules, they became determined to make the relationship work.

On a visit to Sweden, Andy was tasked with a job that required him to be out at sea. Emma was already a certified diver and joined the trip, helping Andy capture behind-the-scenes shots. “Andy just threw me in the water with the sharks and said, ‘Shoot this. Do this. Don’t do that,’” she says. That’s how she got into the business—by diving headfirst into the action. Within a few years, the two made it official, tying the knot in 2010.

Once they had kids, the Casagrandes settled in Naples, where much of Andy’s family resides, giving them a full network of babysitters for Ace, 7, and Nova, 5, when they’re both on location. While Emma spends most of the school year at home with the kids and shooting through Naples Coastal Art, the company she runs with her sister-in-law, the couple takes the kids along on trips when they can. Just this summer, Andy and Emma took them to Tanzania to see where their parents’ love story started.

And even though a large chunk of Andy’s time is dedicated to traveling and shooting for TV networks, he stresses that shows are only a small part of his and Emma’s work. The two work on social media, through their handle ABC4EXPLORE (which reaches more than 150,000 followers), to advocate for the misunderstood creatures. Emma also sits on the board of the nonprofit Shark Angels, which educates the public on the importance of sharks in our ecosystems. Andy recently pledged to donate $1,000 a month to different nonprofits that support his conservation mission, including Florida-based 4Ocean, which has led the charge on removing millions of pounds of waste from the ocean since 2017.

One of Andy’s proudest moments came from a much smaller production he was part of last year, a YouTube short titled People that Inspire Change: Andy Brandy Casagrande IV, which was produced by a friend that he met on set years ago. “It’s easy to reach the people that are already in your camp. Then there are other people who say ‘Why do I give a shit about the ocean?’ We try to get people to understand that a lot of the O2 we breathe comes from the ocean, so you should care about the ocean no matter where you live because it’s our lifeline,” he explains. “And if I can also change one person’s view on sharks, it makes all the long hours and close calls worthwhile.”