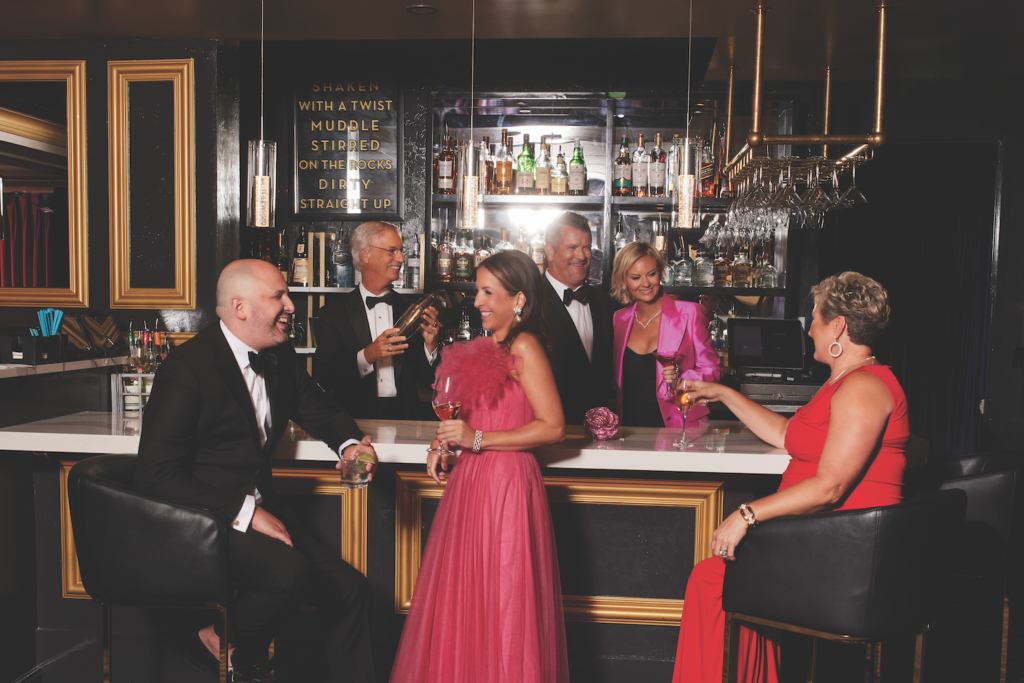 Alise called me and said, ‘Have fun, enjoy it and remember to take off your shoes when you’re not in front of the camera,’” the Golisano Children’s Museum of Naples’ (C’Mon) executive director Dena Rae Hancock says, as she adjusts her René Caovilla pearl-embellished sandals.

She’s at the Bellasera Resort’s sultry lounge, The London Club, for our Forces of Philanthropy photoshoot. And, the Alise she is referring to is Dr. Alise Bartley, the director of the Community Counseling Center at Florida Gulf Coast University. Bartley’s photoshoot had taken place a few days prior, so she called her friend, who she knows is also more comfortable behind than in front of the camera, to offer solidarity and words of wisdom.

Gathering 10 high-powered individuals for an entire afternoon is no easy feat. Between serving on boards, chairing fundraisers, leading capital campaigns, and in many cases, running households and businesses, do-gooders are a busy bunch. To accommodate varying schedules, the group was split in two: Alise Bartley, Marc Collins, Anita Lovse and Brian Rist on one day; Dena Rae Hancock, Amy and John Quinn, Denny Glass, Jennifer Parisi and Luis Otero on another. Bartley’s call to Hancock speaks to the empowering relationship between the women. In the past year, they’ve been collaborating on C’Mon and Shine On, a program developed between their organizations to help families overcome the social and emotional learning issues brought on by the pandemic. For six weeks, families go to C’Mon for workshops to share their fears and anxieties and learn skills to develop confidence, resilience and other positive mental health models early on. 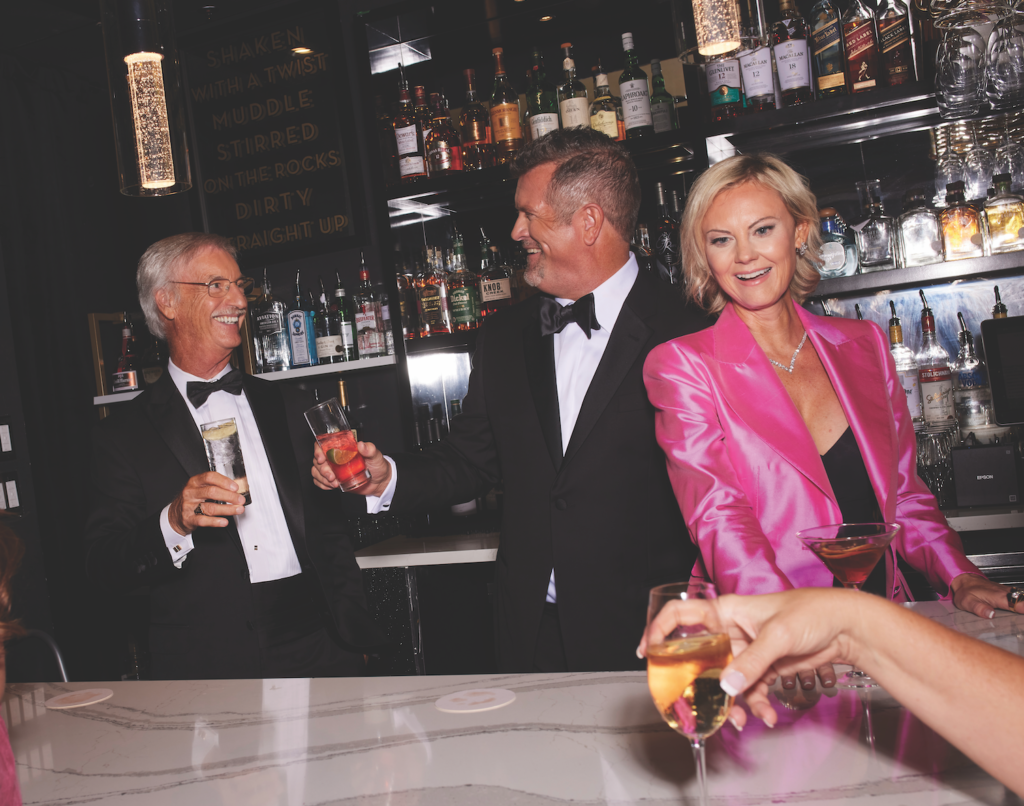 Their sisterhood reflects the collaborative spirit that makes local philanthropy effective. “When you look at things that really make a difference and change paradigms, it’s when people get talking and working together,” says Hancock, who is also on the advisory board  at the world-recognized Center on Philanthropy at Indiana University, her alma mater.

The women walk the walk: In addition to leading their own nonprofits, they often buy tickets and bid on auctions to support other causes. While getting glammed up, Bartley talks up the counseling center and its services to the hair and makeup artists. “Seriously, come see us,” she urges, handing out business cards. “Are you in outreach mode, Alise?” someone asks. “I’m always in outreach mode,” she says. “I’ll talk all day, everyday about mental health to anyone who will listen—we have to talk about it more.”

Her passion is clear, and it’s essential for any effective philanthropist. Fort Myers-based Marc Collins, adds: “We all get hundreds of asks … and you can’t be everything.” He advises benefactors to identify the causes they’re most passionate about and stick with it. “People now are very decisive about where their money goes. They want a clear mission, realistic goals—you have to be able to stand behind it.”

In Southwest Florida, people commit to giving big and for the long haul. Just look at our 2020 philanthropists, who we brought back this year. Wanting to create lasting change, all of them went on to achieve even bigger results for their causes since we last spoke. Bartley launched her planned doctorate program to train more mental health providers; Parisi was successful in passing Serena’s Law, the bill she and her daughter developed to protect at-risk youth from predators; and Collins has raised nearly $300,000 for the LARC Foundation through The Lori Carroll-Collins Scholarship Fund, which he established in his late wife’s honor last year. 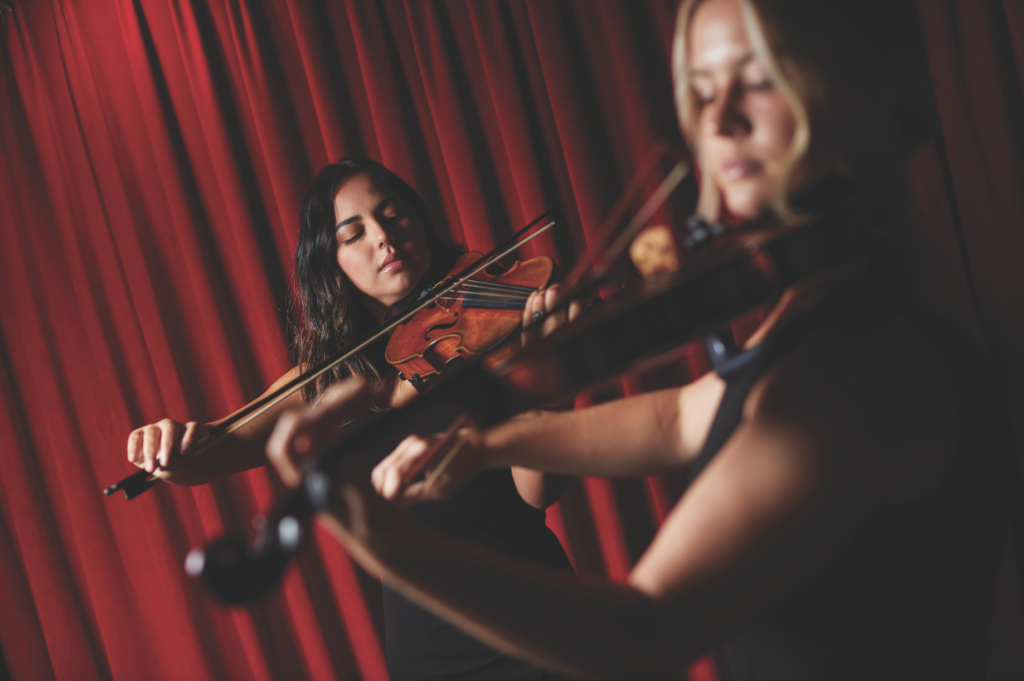 For Anita Lovse, supercharging her giving has meant using the medical supply business she recently launched to double down on the fight against cancer. This fall, Lovse and a group of philanthropic partners debut a partnership with the American Cancer Society, in which funds from the sales of medical supplies help provide $1 million a month for cancer research, with a focus on female scientists. “Of the 49 ACS Nobel Peace Prize winners, none of them are women,” she says. “We want to change that.”

In any area, change doesn’t come easy. And to move the needle, patrons have to understand issues at the root and involve varied perspectives. “All of the organizations I support, I look for them to be committed to diversity,” Collins, who recently joined the Fort Myers Mayor’s Inclusion and Diversity Advisory Committee, says during the lunch break. “It can’t just be a bunch of us who look and think the same sitting around a table deciding what needs to happen.”

There is change afoot, too, with the donor base. As our population grows, new faces are stepping in and people are committing themselves in bolder ways to better our community. Cape Coral-based Brian Rist sold his Storm Smart business and started a foundation with his wife in 2019; Denny Glass helped fund the Glass Animal Hospital at Naples Zoo at Caribbean Gardens; and Amy and John Quinn, who have been here less than two years, have already become fixtures and strong benefactors at fundraising events. Oh, and they created The Fountain 33 Institute for Science and Environmental Research, with college-level labs at Community School of Naples, where they are also rolling out a social and emotional learning program they hope can become a model for other schools. “There’s an overall culture of everyone wanting to improve the lives of children, and we’re seeing that happening quickly … We’re not waiting for years for this to be done—it’s happening now,” John says.

All the philanthropists agree that while we live in paradise and are endlessly blessed for it, there are plenty of local issues in need of attention. They’re also clear that we can all do something to help. “We have a rule at the foundation,” Rist says while sitting in the hair and makeup room. “You can’t bitch about something unless you’re willing to do something about it.” For the self-made businessman, that means focusing on education, entrepreneurship and creating opportunities for young people in Southwest Florida. “I absolutely believe the only way to solve problems is through education,” he says.

Directing the group at The London Club, the photographer doesn’t have to prod them to interact; the conversation flows freely with them gathered in a scene they will repeat dozens of times throughout the season. And the rooms reveal a web of connections: Hancock and Bartley’s friendship and professional collaboration; Bartley recently served as a judge with Rist at a Shark Tank-style event for The Immokalee Foundation; Rist is on the Uncommon Friends Foundation’s board with Collins; Parisi is board secretary at Lee Health and has been instrumental in growing initiatives like Kids’ Minds Matter, which the Quinns support; Otero helps with Zoo Gala, which Lovse chairs for Naples Zoo, where Glass is a top patron. Even the hired entertainment is connected. Rist recalls meeting the founder of Jade Strings at the FGCU Runway Program accelerator, where she presented her idea for a collective of string musicians available to hire for events. “The first money we gave them was for a car,” Rist says. Now they’re one of the most sought-after groups in the region. 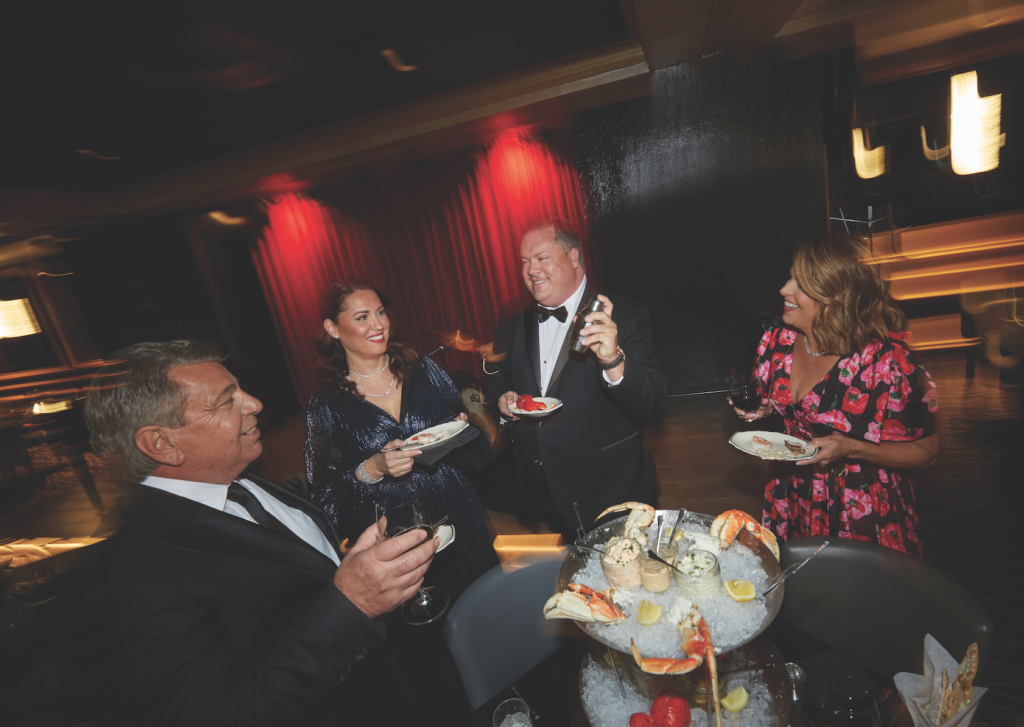 “This community does a really good job of supporting one another,” Parisi says. With hundreds of nonprofits, a social scene anchored by philanthropy and a legacy of generous residents, it’s easy to get connected here. “You see so many people doing such wonderful things and you want to be a part of it, too,” says Denny Glass, who until recently served as chairman on three boards simultaneously.

He, Parisi and the Quinns admit their giving was nothing like what it has become since moving to town. Glass says he and his wife were looking to make an impact when they agreed to help fund the Glass Animal Hospital, a requirement to gain Naples  Zoo’s accreditation with the Association of Zoos and Aquariums (AZA)—a gold-standard ranking.

Something else that feels familiar at The London Club on the second afternoon of shooting is Luis Otero’s presence. Officially, he’s a marketing manager at Saks Fifth Avenue and the man behind the wardrobes for some of the best-dressed men and women in town. Unofficially, he’s the person you call when you want an event done and you want it done tastefully.

While getting photographed for the cover shot, he steps out of the frame to fluff Parisi’s dress and reassess Amy’s look. “She needs a necklace,” he proclaims. “And how about she tries the jacket over her shoulders?” The adjustments are quickly executed, and he saunters back to take his place behind the piano next to Hancock and Glass.

A little later, by the bar, he and Parisi discuss the Kids’ Minds Matter dinner he’ll help her orchestrate this fall. Like he’s done many times for events like Zoo Gala, Juvenile Diabetes Research Foundation (JDRF)  and Bucket List Bash, Otero will be the silent planner making sure things go well. Friends call on him because he has a knack for interpreting a theme and adding the interactive elements that get people in the mood to give (some may remember the temporary tattoo artist he brought in two years ago to honor loved ones affected by cancer at the Cancer Alliance of Naples’ fundraiser, which he chaired the past three years).

Events like these bring in a lot of money—especially in Southwest Florida where nearly every gathering is a fundraiser. And the better the party, the more money that can be raised.

Still, Hancock attests, “Philanthropy isn’t about asking for money, it’s about making life changes and empowering people to do all they can do.”

And when it comes to creating change, this group is a force.

“If there’s one good thing that’s come from the pandemic, it’s that we now recognize how fragile our mental health is. I’m not happy it had to get this bad, but I’m happy people are talking about it.”

Lee Health Board of Trustees Secretary

“I think about how much change I’ve seen in 14 years of being here: The Children’s Hospital, which was not Golisano back then; the Everglades Foundation’s local chapter, which was nonexistent; organizations that shine a light on sex trafficking. To witness that progression and play a small role in all of that is really amazing.”

“We went to a philanthropy conference in 2019 where they talked about giving time, talents and treasure. We believe in giving all three.”

“Our calling is to give to our community. We believe we were meant to be here in Naples and we didn’t know it until we moved.”

“The biggest proof of our impact is the quality of life here. There are issues in the community that we need to address, but no one can deny this is a beautiful place to live, and that has a lot to do with how generous people are.”

“This is probably one of few communities where the nonprofit world is so successful. That has to do with the amount of wealth, but also with the community recognizing the importance of helping its neighbor. I think of it like ‘no man left behind.’”

“I have people say, ‘I can’t afford to do what you do.’ But everyone has the ability to give. Some are going to write huge checks; others have time to offer. But one is just as important as the other.”

“I don’t think one and done gets things done. The things we’re trying to do now will go on forever and ever. We set up the foundation to outlive us.”

“Local nonprofits understand the nuance that most people don’t want to throw money at something. They want to know what they’re doing is making a difference, being run well and creating lasting change.”

“I’ve never seen anything like the philanthropy in this place. When you’re involved, you feel like you should be involved. That’s part of what I think draws other people in.”