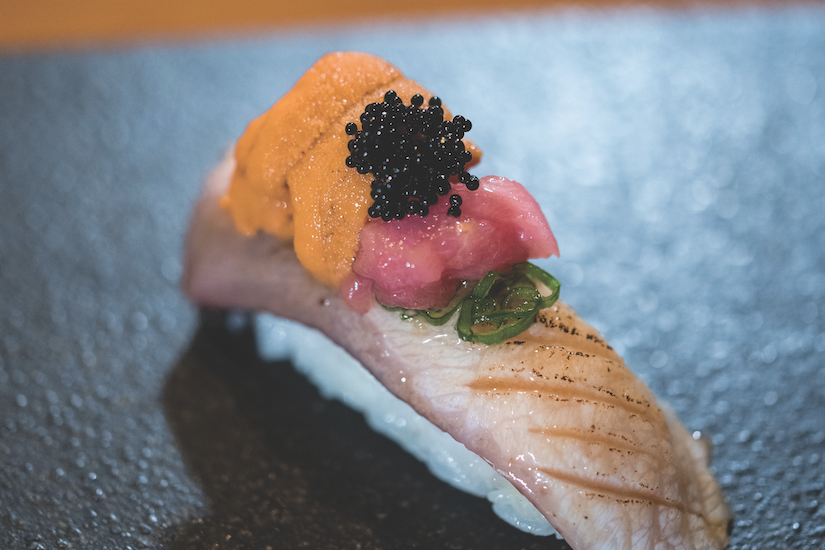 The Japanese word ‘shokunin’ is a good way to sum up the country’s culture. Translating to ‘craftsman’ or ‘artisan,’ shokunin is more about the pursuit of mastery than being a master of your craft. In Japan, chefs and vendors are so niche that some at the famous Tsukiji fish market focus solely on eel or shrimp. At restaurants, apprentices can dedicate a decade to knife skills and preparing rice before being promoted to a prestigious spot at the sushi bar. For Namba Ramen & Sushi executive chef and owner Pitak Hermkunthod, who goes by Koko, his initiation into the art of sushi began in 1999, when he went to work at family-owned restaurants in Japan. Born in the northeastern Thai province of Korat, Koko started helping at his parents’ Thai restaurant at the age of 8. As an adult, he studied electrical engineering and worked for three years in the field before traveling to Japan with Tiger, a friend and chef from Toyama, a coastal city on the main island of Honshu. There, he became enamored with the artistry behind Japanese cuisine and decided to move to the country to study.

The young apprentice went to work in Tiger’s kitchen and spent the next five years bouncing around Toyama and Osaka, studying cooking styles from yakitori to ramen to sushi. “I was taken by the beauty and art of Japanese food,” Koko says. “Sushi requires a lot of detail and is like a personal art because you’re molding it with your hands.”

In Japan, restaurants focus on a specific style of cuisine anchored by carefully guarded recipes. Often, only family members are initiated into the fold, and many owners won’t train or hire outsiders. But that didn’t stop Koko from setting out to learn from who he considered to be one of Japan’s top sushi chefs, Kaita of Osaka’s Sushi Jin Kaita.

After asking and being rejected five times, Kaita agreed to hire him. Koko started his training by cutting vegetables. He’d buy cases of cucumbers, carrots and daikon to practice his knife skills at home every evening after work. Often, he’d wake at 4 a.m. to visit a particular fishmonger and buy the supply needed for the restaurant, along with some extra to practice slicing fresh fish in his free time. During his shifts, he carried a tape recorder to catch every word Kaita said, which he immediately transcribed in a notebook after work.

Practice and repetition helped Koko gain the respect of his mentor, and it’s a philosophy he carried with him when he moved to South Florida in 2004. Koko spent the next 11 years working at various Asian restaurants, like Zuma Miami, before moving to Naples and opening 36-seat Namba, which celebrates its fifth anniversary this spring.

At Namba Ramen & Sushi, Koko works only with fresh fish he buys from a supplier in Miami that sources directly from Japan, then cleans and cuts himself. For dishes that sell out quickly, he will often drive back across Alligator Alley in the morning to stock up on more seafood for dinner service.

He honors what he calls the “old-school Japanese philosophy of food,” meaning he aims to enhance the properties of his ingredients, without distracting from the natural flavor of the fish or the sushi rice. Namba restricts its menu of maki (rolls with toppings) to nine options. Even then, most only have a few added ingredients, like scallions, nori or sesame seeds. The nigiri and sashimi menu (raw fish over a cluster of rice or on its own) is larger, with hamachi yellowtail, golden eye snapper, toro (tuna’s buttery underbelly) and other prime fish that are precisely cut at an angle to create thin, diamond-shaped pieces, which are presented in all their unadulterated glory.

The commitment to simplicity and integrity carries through to every element. For instance, instead of serving green-tinted horseradish as a wasabi subsitute as many restaurants do, Koko grates his paste by hand from the genuine article, which is harvested in Japan. “It tastes completely different when grated,” he says. “More clean and mineral, not the burning heat like fake wasabi.”

Koko considers rice the element that sets a sushi restaurant apart. He makes it fresh, taking the time to ensure the grains are properly rinsed and prepared before being cooked. The simple grain—served perfectly vinegared and at body temperature—made the culinary world fawn over three-Michelin-starred sushi chef Jiro Ono (you may recognize him from the cult-favorite documentary, Jiro Dreams of Sushi). Koko aims for the same level of precision at Namba. He pays attention to every detail: temperature, seasoning, texture, consistency, moisture and proportion of rice to fish.

Four sushi chefs run Namba’s kitchen, and Koko will openly share his techniques—if the student is willing to put in the time and effort to become a shokunin. A young chef who started training under him recently left after six months because he was frustrated. He complained that all he did was slice vegetables, but Koko wasn’t only testing his knife skills; he was also testing his patience. “During my five years in Japan, the main lesson I learned was that a dish is not simply knowing a recipe; it is all about technique,” he says. “A technique can be learned and eventually mastered—with discipline and practice.”