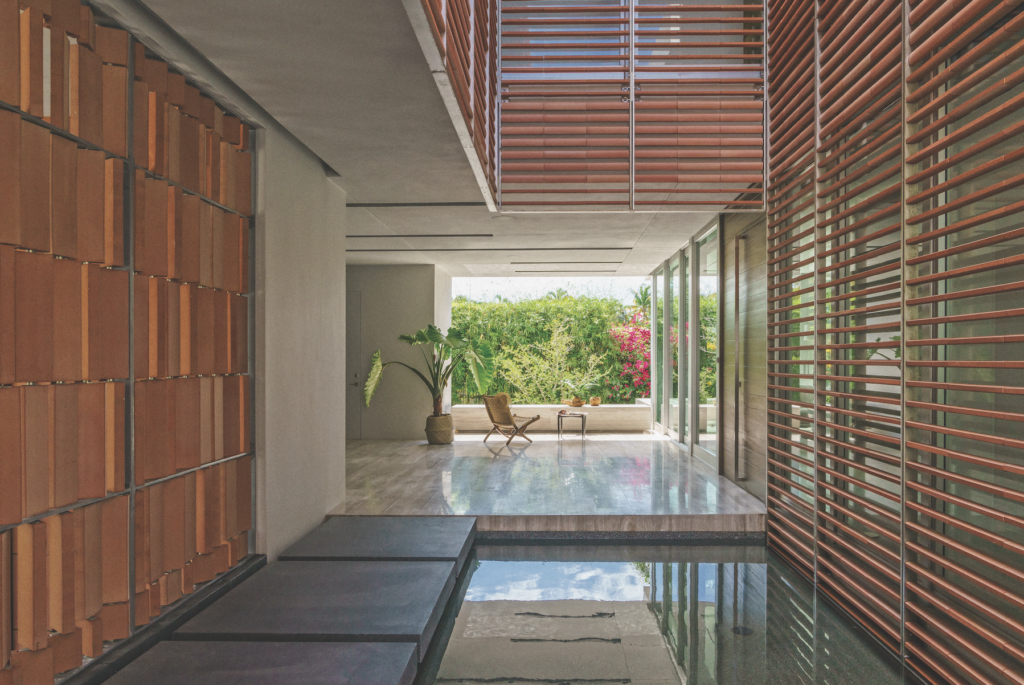 Water views were a priority for the homeowners, but the lot was landlocked. To solve for this, one thing González did was incorporate a reflection pool, which visitors pass as they enter the central courtyard. (Photo by Michael Stavaridis)

From the outside, this Key Biscayne home is a study in geometry, a precisely composed structure of rectangular forms that reads as warm but not entirely welcoming. The vast stretches of windowless exterior walls suggest a small, private museum, where works must be protected from direct light or, perhaps, the domicile of a reclusive individual with exquisite taste and clear boundaries.

“We wanted to create a sense of leaving the city behind you and having a very private condition once you get into the house.” René González, the Miami-based architect responsible for its design, says. González may be best known as the designer of Glass, an 18-story residential tower on the southernmost tip of Miami Beach; he has garnered a plethora of awards from the American Institute of Architects and published his first monograph, Not Lost in Translation, in 2018.

He was the first choice to design the 5,200-square-foot home with very few directives from owners Myriam Rojas, of design and construction firm M.Z. Design Inc., her husband Gil Ron, a mechanical engineer, and their combined family of four children. “My husband was used to living in a condominium, and he loved the view, so his requirement was that he needed to see water,” Rojas, who acted as the project’s contractor, explains. The couple had bought and sold other lots prior to settling on this one for their first home together as a family. But despite being two blocks from the beach, the lot was landlocked. González faced the challenge of creating something special, including water views where there were none, “on a site that didn’t have anything special,” Rojas says.

While Rojas and Ron didn’t have a proverbial laundry list of must-haves, González did. First and foremost, he wanted the home to be tied to nature and the sky, with light coming through the building in unique ways. He also felt it was important to make a connection to the Key Biscayne community and to Latin America, a nod to the culture of Rojas, who hails from Bogotá, Colombia, with patios; persianas, or louvered screens; and portales, or porches, harkening to her native land.

The resulting home satisfies all the aforementioned requirements. Despite being, as González describes, a very solid house from the front, the home is infused with light and breezes that seem to float on water, thanks to some serious architectural magic. The elevation of the home is strategically placed above the flood line; to enter, visitors must ascend a series of steps above and around a reflection pool that leads to a courtyard. (The courtyard, while inspired by Latin American architecture, is not as grand or expansive as one might expect, but rather exceedingly modern and architectural, oriented toward the sky). The journey is purposeful, creating  “the sense that you are entering a house through a series of gardens, and next to pools, versus just entering a space,” González explains.

Static, terra-cotta louvered panels envelop the walls of the courtyard, serving to simultaneously diffuse the light and cast shadow patterns into the interior spaces. Though González chose to use terra-cotta as a nod to tiles found in many Latin American homes, these were crafted by a century-old Italian company, Sannini Impruneta. (The company has created tiles for the Church of the Holy Apostles in Florence, the Chiaravalle Abbey in Milan and the Tokyo subway; this was their first commission in Florida). The combination of louvers and large expanses of glass create the ultimate indoor-outdoor experience. “You have an incredible amount of openness and leisurely, casual spaces that spill from the inside to the outside quite effortlessly,” González says.

This carries through on each of the four floors, with a series of predominantly covered terraces that provide protection and views, from the open pavilion on the first level to the four bedrooms on the second, the office and other private spaces on the third, and the rooftop on the fourth. “We had to create our own views and perspectives … There are many places in the house where you are looking out over a reflection pool or from the garden across a pool. We created our own amenity, if you will,” González says. “They can come home from a tough day at work and relax within spaces that are meant to be soothing, quiet and contemplative—it’s kind of like a free therapist.”