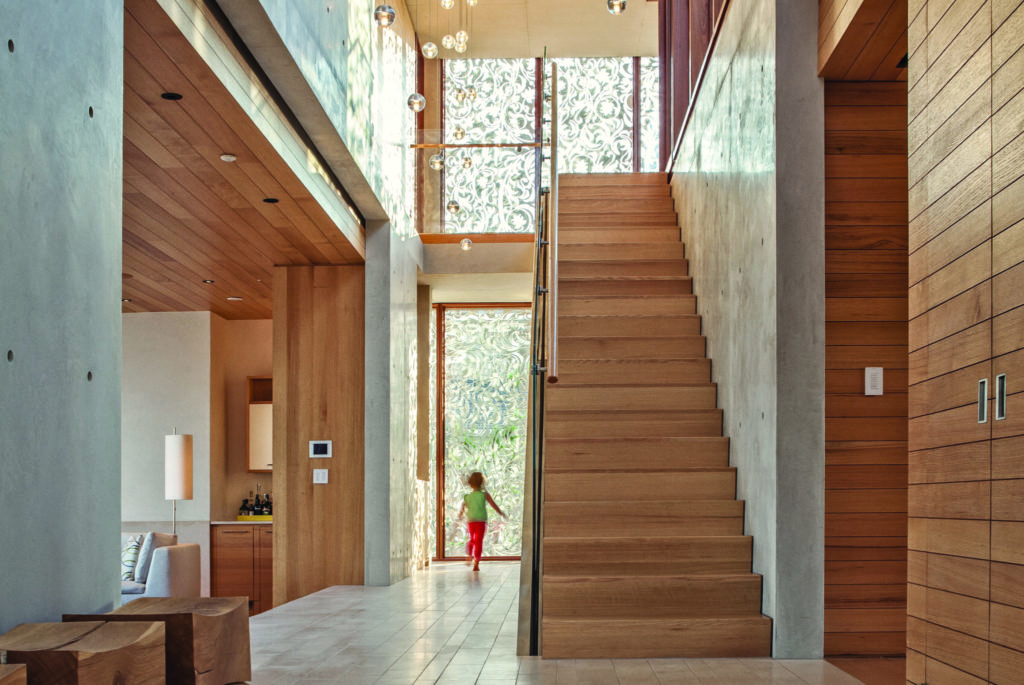 Gone are the days when creating a secure home required hiring a team of former Navy SEALs, unleashing the hounds or splaying unattractive bollards around your gorgeously landscaped perimeter. There is now a host of companies that are integrating microtechnology into landscape design and architecture to protect homes—and the people and things inside—from disasters, ranging from art theft to storm surges. With the right teams, no one has to know that a hand-hewn door hides a safe room, a Rothko is electronically tagged or a multimillion-dollar view is afforded by elevation that also prevents flooding.

For the 0.1%, an entire home can double as a shelter, be it from intruders, hurricanes or even a power surge. “The number one threat right now is an electromagnetic pulse (EMP),” Brian V. Camden, principal and founder of Virginia-based Hardened Structures, says, referring to the high-intensity surge of energy that can disrupt or destroy electronics. The company has been building bomb shelters, fortified homes and underground bunkers since 1991. “Everyone is hardening for that now.” Along with protecting a home’s mechanical room so that generators and other electronic machinery don’t get fried in an EMP, Camden builds houses using insulated concrete forms with cores as thick as 10 inches. These “hardened homes” are usually about two to four times more wind- and -weather-resistant than a regular home and also happen to be bulletproof. “You put stucco or wood over it, and no one knows the difference,” Camden explains. “That gives you protection against 250-mph winds and phenomenal insulation.”

Naples Premiere Systems offers reinforcements in the form of high-end finished doors and windows. “You look at them and think they are just beautiful, but they have upgraded security, motorized locks and different levels of ballistic capabilities,” Premier’s vice president Robert Anderson, Jr. says. The doors are equipped with customizable technology that allows you access via highly personalized biometrics (like your fingerprint or facial recognition) or physical proximity to your Bluetooth-enabled devices. And, in lieu of panic rooms, Anderson says, people are turning entire rooms in their home, including bedrooms, into so-called ‘serenity rooms,’ where the walls and windows are weather- and- bulletproof. Straying from the cold, windowless image commonly associated with safe rooms, companies like Premiere can now outfit any room in your house to serve as a safe space—equipped with dedicated networks that allow those within to stay in contact with emergency services, as well as cell and internet service to connect with loved ones outside.

That’s not to say panic rooms are totally out of the equation. Italian firm Agresti has been creating custom cabinets and safes for over seven decades, but they’ve seen growth in treasure rooms outfitted with customizable cabinets and ultrasuede-drawer linings. The armored door is magically opened with each family member’s pre-programmed biometrics and doubles as a beautiful closet. In the event you are coerced into opening the door, you can use a different finger that will trigger a silent alarm.

If good fences make good neighbors, imagine a barrier as ornate as a museum wall; passersby may come and steal a look, but nabbing anything else will be difficult. Architect James Timberlake implemented this tactic when designing the U.S. Embassy in London, which sits atop a spiral garden and is wrapped in laminated glazing and a transparent film that minimizes the sun’s glare while maximizing its light efficiently. “Security should be more integrated, more discreet, and architects should first try to think of passive ways to incorporate security requirements,” he says. Fabricator Cosentino also creates architectural cladding, called Dekton, that adds to a building’s energy efficiency and can withstand extreme temperatures and other weather conditions. Climate change and its effects are among the biggest threats to coastal homes. But smart architecture can future-proof nearly any residence. Conscientious local architects opt for flat roofs, elevated structures, ample shade and low-impact materials that are low-maintenance, energy-efficient, and built for longevity—even in the face of Florida’s salty, sunny, humid atmosphere and storms. Firms like New York City’s Raad Studio have reimagined the beach house, incorporating manmade hydrodynamic dunes into the skeleton to allow stormwater to flow right through the land without damaging the structure.

Fort Myers-based landscape architect Mariah Bakke likes to (respectfully) build on the dunes as a way to weather-proof the shore. “I do a lot of dune stabilization on the Gulf side, which is eroded by storms and even tidal movement,” she says. She loves to make elevated boardwalks out to the water, planting native species (railroad vines and dune sunflowers) beneath the wood, and creating sand paths to the shore lined with plants and trees, like mangroves, that serve as erosion-defense systems. “I know they can get big and unruly, and I’m OK with trimming. But if you trim too much, your house will not be protected from surges,” Bakke says. “Those mangroves are protecting our coasts.” The tangled trees and other native plants also guard the home from intruders, who are deterred from trekking through the brush.

As for the valuables you keep inside, of course, there are plenty of stealth hidden camera options. But, for those priceless possessions, we’ll take it one step further. What if those treasures pieces could be tagged, unscathed and monitored 24/7? Enter Art Guard’s Magnetic Asset Protection (MAP) System, which places tiny rare-earth magnets on anything from your grandfather’s Patek Philippe watch to your Giacometti collection, and detects if they’ve been moved with a nearby sensor. Any movement of the magnet—and thus the piece it’s attached to—triggers an alert to you via any preset preference: text, a phone call or a call to the police. Art Guard’s MAP is used in New York’s MoMA, Sotheby’s and in about 400 private collections around the world. “We can protect anything: art, jewelry, memorabilia,” Anderson says.