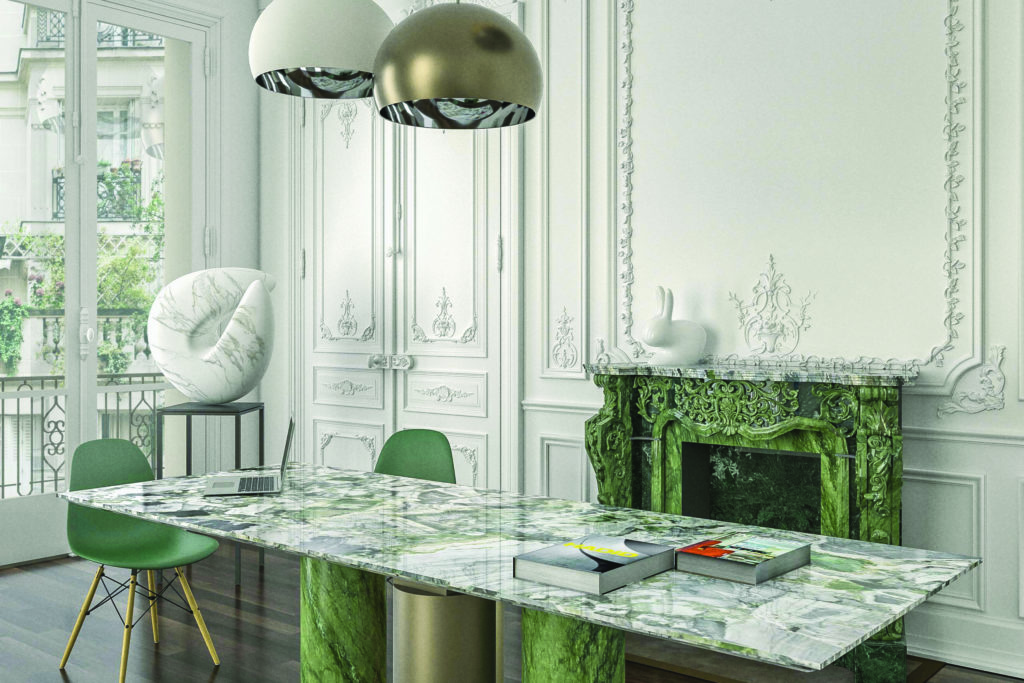 For millennia, marble has been revered in art and design, with many centuries-old statues and buildings from ancient Rome, Greece and Egypt still standing today. In the past decade, designers have modernized marble’s appeal, looking beyond the pristine white Calacatta and Carrara, getting creative with anomalous applications and embracing various styles with unique veining and colors.

Kreoo, the product design arm of Decormarmi—an Italian marble masonry founded in 1963, has been at the center of the marble revolution since its debut in 2010. Now, the brand brings its decidedly modern take on the stone to Southwest Florida via a collaboration with local designer Dwayne Bergmann.

Bergmann, who discovered Kreoo last summer while looking for a showpiece for a bathroom project, is a natural fit for the marble brand. With his upcoming collection, the designer brings his special knack for livable luxury to the medium. “Luxury doesn’t have to mean formal or unusable,” he says. “You can have a luxurious experience in your shorts and flip-flops.

Inspired by the stone artisans of ancient civilizations, the designer plans to include midcentury-looking pendant lights, dining tables, consoles and some smaller objects, like candleholders, napkin rings and tabletop pieces. He’s also sketched concepts for bigger pieces, like tubs and washbasins. With all this, Bergmann aims to demystify marble and make it more approachable for those who see it solely as a symbol of glamorous elegance. Mirroring more forward-thinking trends that remix the material with other surfaces (acrylic, wood, resin), some of the designs may feature marble as an accent. You might find, for instance, a wood table with marble legs; a black marble side table with an integrated, brass-detailed magazine rack; or a headboard that incorporates marble accents. “We’re flipping the conversation,” he says.

For Kreoo’s partnerships, designers are embedded in the process, traveling to quarries in Italy, Brazil and throughout the Middle East to select slabs. Back in the Italian workshop, the Kreoo team uses machinery that works similarly to a 3D printer to precisely carve the block, eliminating error and waste before artisans apply the finishing details. And, Kreoo goes beyond fabricating products. “That’s where the designer comes in—it’s about using the stone in the right way to really highlight its natural beauty,” the brand’s Sandro Marchesin says.

Bergmann’s collection debuts this summer at Salone del Mobile in Milan (arguably the world’s most important design fair). In the meantime, you can scope Kreoo’s range of luxe home products at Bergmann’s showrooms in Naples and Fort Myers. “Putting this material into the furnishing side is not new, but it’s not widely used,” the designer says. “Instead of it being pushed into the corner, we’re going to breathe new air into it with these decorative pieces.”