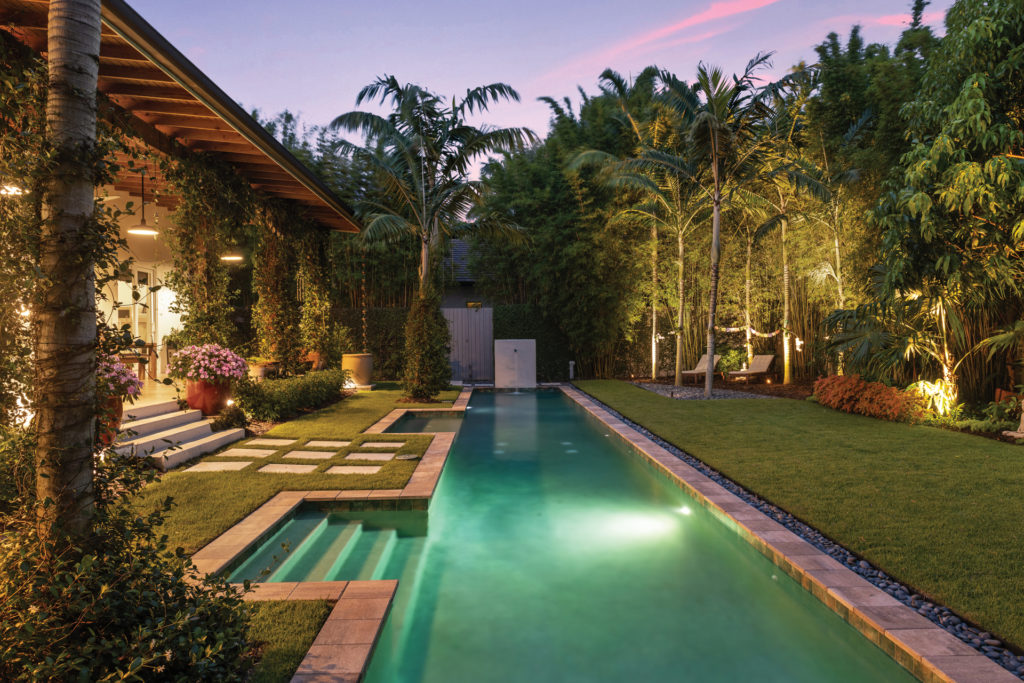 The backyard is set for relaxation, with Zen features like wind chimes, Nepalese prayer flags and Buddha statues that remind Laura of her travels. (Photo Courtesy Spacecrafting)

“I don’t know how to put it in words, but I have a deep connection to this house,” Laura Martin says about her abode in Naples Park. “After all these years, I’m still in love with it—especially the beautiful backyard.” Laura, a former flight attendant from Argentina, relocated from Miami to Naples three years ago with her commercial pilot husband and two children. Miami’s notorious freneticism had become too overbearing for the young family, who looked to the Gulf Coast for a much-needed change of pace.

In Miami, the Martins lived in an extravagant 1920s Italianate villa in Coral Gables, but in Naples, they nabbed a whitewashed, metal-roofed bungalow. The home was more than an aesthetic foil to their previous residence; it was also nearly half the size. But downsizing wasn’t an issue for Laura—in fact, with her daughter heading off to college, it was partly an objective—as long as the new property possessed one non-negotiable feature: a veritable oasis of a backyard.

Occupying a south-facing double lot with ample sunlight, the 1,800-square-foot home was designed by New York City- and Stockholm-based architect Solveig Fernlund. Her affinity for clean Scandi minimalism has wooed clients such as Sofia Coppola (Solveig designed the Academy Award-winning filmmaker’s Napa Valley retreat). With industrial poured-concrete floors, stark white walls and ceilings that soar 12 feet high, the open-concept bungalow could be dropped into any cosmopolitan hub and feel right at home. “Inside, it looks like a New York loft,” says Laura, who stripped away the previous owners’ ornamentation to restore the home to its blank-canvas feel. “I am a total minimalist and no longer like to hold onto material things.” The walls remain free of art; instead, large windows look out onto the masterfully landscaped backyard.

While the interiors recall New York City, the backyard channels Montego Bay. Impact-resistant glass sliding doors open onto a sprawling concrete patio, shaded by a wood-slatted pergola. The original homeowner, nostalgic for his childhood years spent in Jamaica, created his a mini-Antilles. He erected an 8-foot-tall concrete-block privacy wall; planted a wealth of tropical botanicals, like the Madagascar jasmine that climbs up the pergola’s wooden pillars; and installed lotus rain chains from the roof, which empty into colossal barrels.

It’s a Zen escape. “[The previous owner] told me he wanted to hear the bamboo sway in the wind,” Laura says of the thatches of the plant found along the garden’s perimeter. “I had no idea what he meant at the time, but I hear them now, and it’s just gorgeous.” Laura also put her green thumb to use, adding a smattering of large, herb- and flower-filled planters on the patio and grafting orchids to the trees in the back.

Then there’s the showstopper: a 62-foot solar-heated lap pool and water fountain surrounded by a border of pebbles. Laura ensured all the alfresco seating areas and nooks directly overlook the pool. She furnished the porch with a set of teak chairs on one side and a wooden dining table with benches on the other. Toward the back of the garden, she placed a pair of sunbeds underneath a string of Nepalese prayer flags (a gift from her brother) and nestled a statue of Buddha in between. “It’s where I sit every morning—my favorite place,” she reflects.

After flying the globe for a living, Laura feels she’s finally landed in the right place: “If I had the opportunity to build a house from scratch, I would have built it exactly like this.”