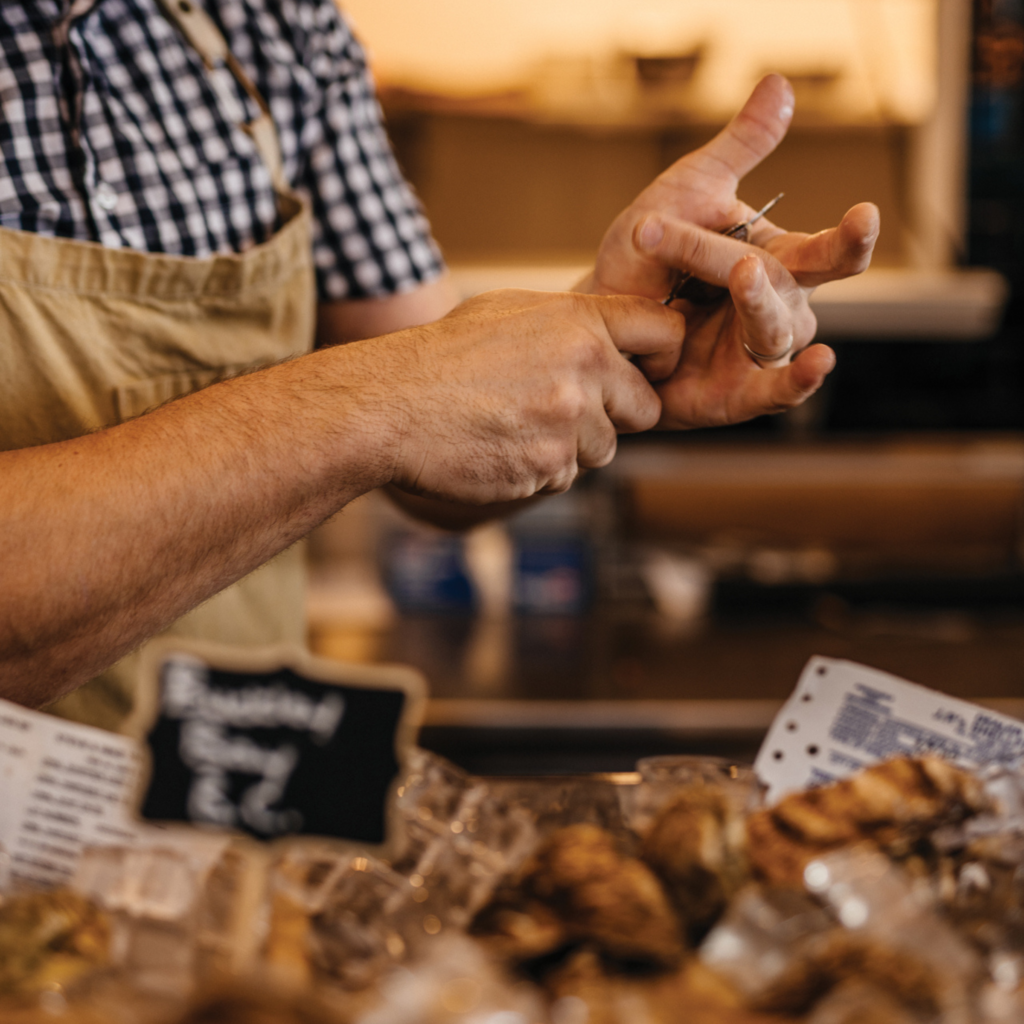 At Coldwater, chef-owner Adam Nardis approaches oysters like sommeliers approach wine, focusing on merroir and educating guests about the varying qualities of the bivalves. He hosts Go Shuck Yourself classes, along with offering fresh catches at the in-house seafood market. (Photo by Tina Sargeant)

From his perch behind the 13-seat wooden raw bar at Coldwater Oyster Market, Adam Nardis pops open bivalves with a flick of the wrist, while waxing poetic about the differences between varieties: The Sweet Petites from Martha’s Vineyard are firm and creamy with a high brine. The Saltgrass Points from Prince Edward Island are clean, crisp and have more minerality. His menu rotates through thirty some different oysters, all from cold water locales in the northeast and Pacific Northwest, and the descriptions read like a wine list. “I’m sort of the oyster sommelier,” Adam says with a laugh as he guides guests through his tasting notes. This is a man who knows a thing or three about oysters.

Adam and his wife opened Coldwater in Fort Myers last year. From the wide open space with 40-foot ceilings and garage doors, they sell a selection of perfectly sourced seafood in their restaurant and attached market, from Dungeness crab to live Maine lobsters to clam chowder. But the heart of the operation is the boutique oyster program. They go through more than 3,500 bivalves a week. “I encourage people to sit there and engage while we shuck, to ask questions,” Adam says. “Eating oysters should be communal.” He subscribes to this mentality so much that when people are dining in pairs, he encourages them to order at least two of each variety they choose so that both people are able to taste and compare notes. Often, he’ll pop one open for himself to eat with them.

Originally from Cleveland, Ohio, Adam was baptized with Gulf seafood when he moved to Naples and began working at Maxwell’s on the Bay (now called M Waterfront Grille) before the holidays in 2005. The owners had a sister property on Block Island, Rhode Island, and asked Adam to be their executive chef in the summer of 2008. That’s when he fell in love with seafood from the coldest and deepest parts of the sea. Cold water slows the animal’s metabolism, which translates to crisper, sweeter oysters—because they grow more slowly and take in more minerals and nutrients over the years—and fattier fish rich in Omega-3. For Adam, it just tastes better.

The wine metaphor for his approach to oysters isn’t off base. Much like wine has terroir, oysters have what is termed merroir. All up and down eastern North America, from northern Canada to the mouth of the Mississippi River, oysters are the same variety: Crassostrea virginica. The different names you see on menus simply refer to where they were harvested—where an oyster grows directly impacts its flavor. The temperature of the water, its salinity, the composition of the sea floors and banks—sandy, rocky, muddy—all contribute to the taste. “If you grew a cabernet grape in California versus in someone’s backyard in New York, you’d essentially have the same grape but a very different flavor,” Adam says. “Oysters are the same.”

These shellfish are filter feeders, meaning they take their surrounding water and purify it. One single oyster can filter 50 gallons of water a day. Put that in terms of a massive oyster bed or farm where there are 750,000 oysters per acre—they are crucial for filtering and cleaning our water on a daily basis. They keep the seas clear, letting sunlight pass and allowing seagrasses to grow, providing food and protection for fish. “Oysters are ground zero on the chain of life,” Adam says.

So, he’s doing everything he can to support oyster farmers. “Oyster aquaculture is an absolute labor of love. In my research, people don’t dream of growing up and farming oysters. They get into it because their family did it. Oysters are a culture-rich food, like barbecue, pizza and pasta-making,” he says.

And now that the traditions of the holidays are upon us, it’s the perfect time to celebrate with a dozen on the half shell. You’ve heard the adage: only eat oysters in months with an ‘r’ in the name. This rule of thumb dates back 4,000 years, primarily because summer oysters tend to be more watery (thus less flavorful), they spawn in the summer (and need a few months to break from harvest to sustain the population) and warmer temps (before reliable refrigeration) raise the risk of food poisoning. In winter, they hibernate. Before they do, they gorge on phytoplankton to load their system with glycogen, a type of sugar used as energy to get them through the winter months. By late December and early January, they’ve entered full hibernation stage but haven’t yet tapped into their glycogen supply, so they are at their plumpest and most flavorful. There couldn’t be a better time to pop a bottle of bubbles alongside a platter of these briny jewels.

Adam suggests diners try drinks that complement the oysters rather than mimic their flavors. No dirty martinis, please. Sparkling wine hits perfectly: it’s crisp and clean, and the effervescence cleans up the brine on your palate. His personal favorite? Schramsberg Blanc de Noirs from California, a white sparkling wine made from a blend of pinot noir and chardonnay grapes. Beer’s carbonation achieves a similar effect; they have 44 beer taps at the restaurant.

The ultimate oyster proselytizer, Adam encourages people to bring oysters home for their celebrations. If you buy from him, he needs 12 hours’ advance notice on your order if the product is not stocked. Adam or his chef de cuisine, Dustin Laugherty, will pack you a selection of the best oysters you can buy in the area. When you’re buying oysters, smell them to ensure there’s no off odor. The oyster should also be fully closed and have a uniform shape, although not all varieties are uniform. “If you bang two of the shells together, they should sound like rocks. You don’t want a hollow sound, which means one or both are dead. If it sounds like rocks, it’s alive and full of liquor,” he advises.

With proper storage, live oysters will keep up to two weeks, so you can easily plan ahead for your festivities. For best results, store them on ice in the fridge with drainage underneath. In a pinch, an unsealed Tupperware container will do the trick. “The oyster will let you know if it’s not wanting to be eaten,” he says. The smell is unmistakable if it’s gone bad. “A good oyster shucker runs every oyster by their nose before they shuck, just to be sure it’s OK.”

Of course, then you have to get into them. Adam offers small-group classes called Go Shuck Yourself, which include a dozen oysters and your own oyster knife to take home. Or just buy an oyster knife from their market and belly up to the bar for on-the-fly instruction. They’re always willing to bring more people into the oyster fold.