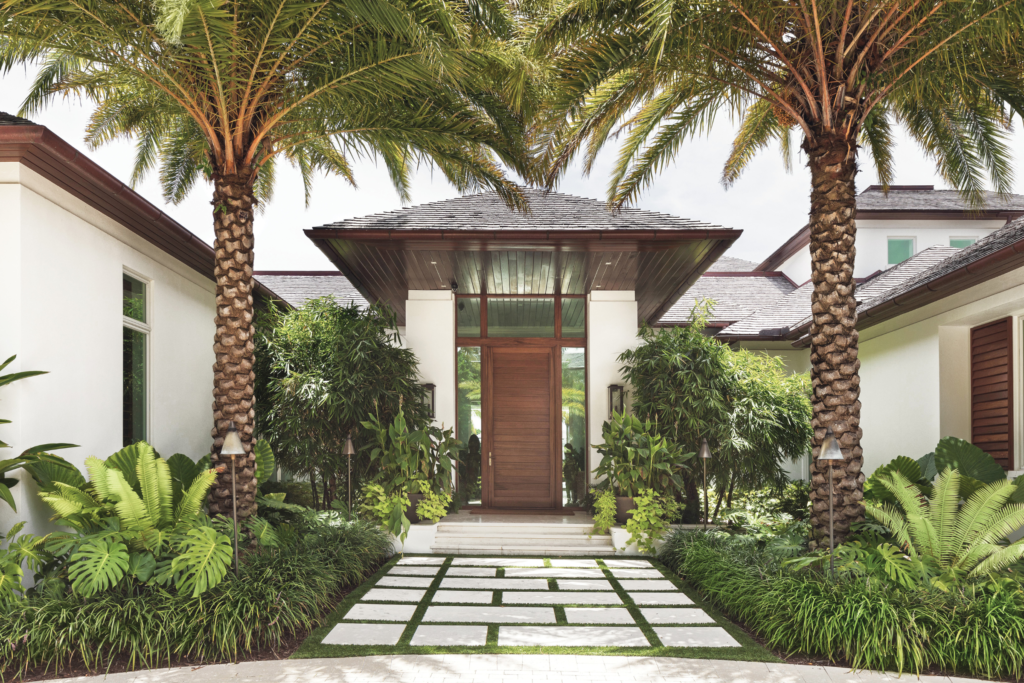 She pulled in John Cooney, of Stofft Cooney Architecture, to help with the design of her dream home, built on the plot of land where her 1977 property previously stood. (Photo by Lori Hamilton)

After Christmas Eve dinner at her friend’s Aqualane Shores home in 2014, Karen Van Arsdale returned to find her Old Naples house on fire.

She’d lived in the 1977-built  stilt house for 28 years and had poured much of herself into the Caribbean-inspired design, replacing the doors with impact glass and filling the interiors with her vintage finds and art. She did not think to replace the old aluminum wiring, though. “It self-ignited when we turned the heat on … I lost everything,” she recalls. “It was such a journey, first of feeling violated, then of not being sure what to do. There’s also this period of denial.”

For two weeks during the holidays, Van Arsdale lived in the charred remains with her two dogs because she couldn’t find a rental. She attempted to save the home, airing out a few of her treasures and mopping the floors while battling it out on long calls with her insurance company. “The integrity was damaged to the point that it wasn’t worth [salvaging]. I had to get out of the environment to realize I needed to rebuild,” she says.

After a few months of toil and much support from close friends, she started to dream of designing her dream home from the ashes.

Van Arsdale is a force in the Naples real estate market and has worked in the industry for 40 years. Over the decades, she’s seen every style of fabulous property on the market. Knowing she wanted her new home to be timeless, she pulled design inspiration from her clients. “I had one house in Fort Charles in Port Royal that I absolutely loved. I’d sit there for an open house and feel so inspired by the architecture: the natural wood, the floor-to-ceiling windows, the mahogany. And it still felt contemporary, with clean lines and an organic feel,” she recalls. This vision became a driving force for her.

She also loved the architecture she experienced while on her travels to islands—particularly St. Barts and Turks and Caicos. She knew she wanted to use exposed beamed ceilings, which are prominent in St. Barts. She also drew inspiration from the five-star Amanyara Resort, in Turks and Caicos, for the home’s floor-to-ceiling glass windows with louvered shutters and the backyard pavilion, visible as the primary focal point across the pool when guests enter the house.

Van Arsdale hired local architect John Cooney, of Stofft Cooney Architecture, to help build on the same land where her 1977 home once stood. “[Cooney] had an eraser on his pencil and sketched lots of different designs. He listened to what I wanted and created the basis for what my home is today,” she says.

It took four years to build—one year for planning and dealing with the insurance company and three for the build-out. Her dream home was completed in 2019. Today, the four-bedroom, four-and-half bath is an oasis. The St. Barts ceilings, Wallaba shingle roofs, lush greenery and crystal blue pool evoke the spirit of an island retreat. For the floors, she chose white oak from Belgium with irregular widths—from 11 to 19 inches—to complement the scale of the space. The randomness is part of the charm.

The home is mainly built on one level, save for a guest room with a balcony resting on the second floor. “Having been in a home that was stilted with a reverse floor plan, I was ready to be on one level,” she says. To highlight her art, Van Arsdale opted for clean-lined furniture with simple shapes and shades. “I wanted to bring in color through the artwork,” she says.

Many of Van Arsdale’s treasured belongings were charred in the fire. “I had to let go of a lot of things I’d collected over the years, but doing so opened up new beginnings,” she says. The art lover acquired new works from local artists Ran Adler, Paul Arsenault, Reisha Perlmutter, Arturo Correa and the late Richard Segalman.

Throughout, plenty of elements nod to her tropical inspirations. In the powder room hangs an image of a plane landing in St. Barts. “Flying there is half the adventure. I wanted my guests to feel like they were being welcomed to the island,” she says.  She also loves her outdoor shower, which extends from the primary bath and has a wood bench in the bathroom from Bali. “Coming home is my sanctuary. It makes me feel like I’m on vacation,” she says. “That was my goal—to feel like I am transported to another place.”