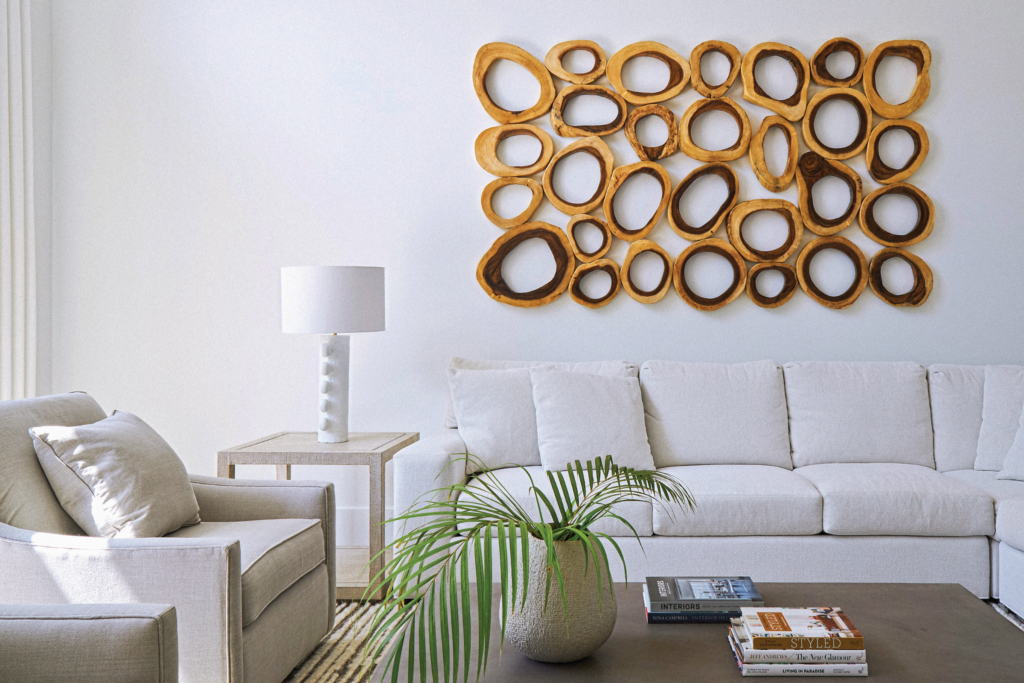 Nature-inspired elements, like the Phillips Collection wall panel in the living room, create an inviting, cohesive thread in the home, which is largely painted in Sherwin-Williams Extra White. (Photo by Michael Alan Kaskel)

When Bill and Susan Carroll first saw their now-residence on Fifth Street South in Naples, some two years ago, the house was in disrepair. They saw the potential and purchased, intending to renovate with a contemporary aesthetic. The two enlisted Naples-based L Design Studio and Bonita Springs-based Direct Contracting Group to execute the eight-month redesign. “We wanted to combine a modern feel with a Bohemian vibe, while maintaining a design that was timeless. We aimed to incorporate crisp forms with organic colors, materials and textures,” Susan says.

A staff of 50 transformed the dark Tuscan villa into a modern beach abode, where overscaled art and accessories stand out, L Design’s Lyndsey Davis Nicklas says. Sherwin-Williams Extra White provides a blank canvas. Concrete countertops and sleek tile in the open kitchen create a modern anchor for the home, warmed with creams, light woods and sunny pops of color.

The team started by reconfiguring the layout of the home, which sat on a long narrow lot with the pool along the side. The kitchen was originally adjacent to the living area and the dining room was a separate room, so they swapped the spaces to create a seamless dining experience. They knocked down non-loadbearing walls and moved windows in the kitchen and dining room for clear sightlines to the pool and to increase the flow of natural light throughout. “It makes the spaces feel much wider than the area,” Davis Nicklas says.

In the kitchen, the ombré Arteriors pendants over the island recall modern Caribbean design found in St. Barts and BVI. Susan fell in love with a Clé Moroccan zellige tile when she saw it in a magazine, so it was installed as backsplash, without any grout, to let its natural beauty shine. “It’s just imperfect enough, which offsets from most everything else in the home. It has an amazing texture and a bit of a sheen which changes at different times of the day,” she says.

A custom, white stucco range hood contrasts the backsplash. Angular, black legs on the blonde-wood island and concrete countertops lend a casual edge with their industrial influences, while hidden electrical outlets ensure the space is polished. Chuck Bischoff, of Bischoff Cabinetmaking, crafted the rift-cut white oak cabinetry (painted white) and surrounding frame, which was stained to match the island and other wood elements. The brushed brass pulls on the two-tone cabinetry are sophisticated, while white bar stools are cohesive with the dining room’s white chairs, tying the two spaces together. “Risks like this create an exciting and fun space to live and entertain in,” Davis Nicklas says, commenting on the unabashed blend of contemporary and industrial nods.

Natural elements are consistent: on the hallway wall leading out of the kitchen, Palecek wood beads provide a clear focus. On an nearby wall, a beaded mirror hangs over a rustic, twisted wood console from Alison Craig. Just beyond, the family room’s Phillips Collection chamcha wall panel creates synergy with the foyer’s cypress table and the hues of the ombré raffia pendants over the island.

Overhead, the team refinished and retained the exposed beams. “Repeating that warm, white oak finish in the beams, cabinetry and flooring, pulls your eye through the space,” Davis Nicklas says. “The repetition of color and tone creates a modern, simplistic palette, which allows the bold elements to stand out.”

Several key structures had to be modernized. Originally finished in golden oak, the staircase looked like it belonged in a house from the early 1900s, Bob Hayes, of Direct Contracting Group, says. His team added a riser cap and swapped in cable railing and treads. “Now, it gives off a fresh appearance,” he says.

Upstairs, art and modern fixtures set the tone. In the primary bedroom, black-and-white geometric prints flank the canopy bed, as do wooden side tables, honeycomb pendants and cream-colored shades. The primary bath features a sea anemone-like chandelier and deep soaking tub atop a stone mosaic inlay that matches the tiles in the shower. Copper hardware is elegant and pulls in the brown hues in the mosaic stone. The powder bath has a floating, mitered-edge porcelain vanity with a wall-mount faucet against an accent wall of mustard-colored concrete tiles in a star-shaped pattern.

When Susan walks into any room, she feels at home. “With the help of so many, we were able to turn this into our true happy place,” she says.