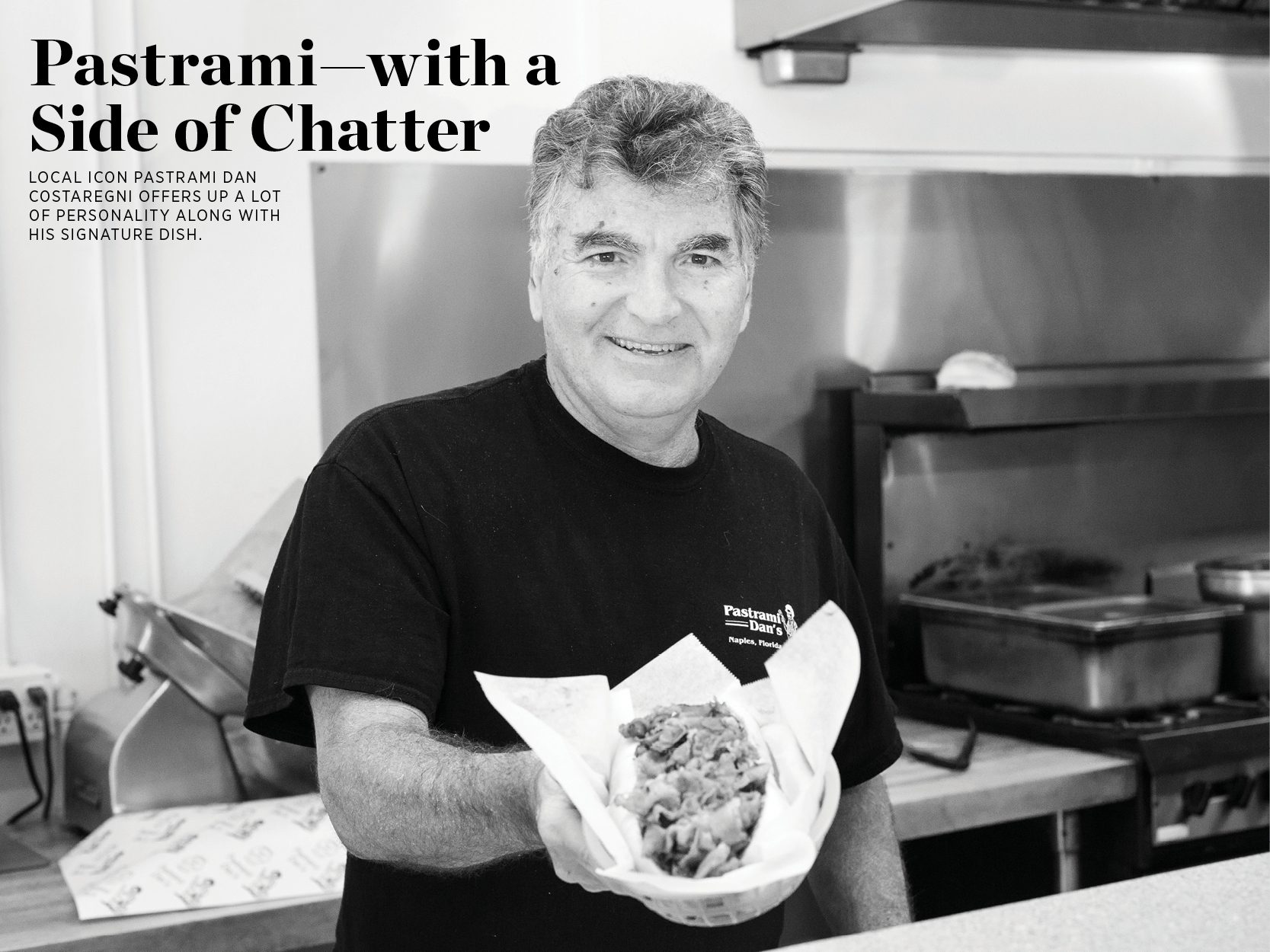 The signature scent of Pastrami Dan’s hits you squarely before you even reach the front door to the downtown Naples shop: salt, smoke, a little sweet. It emanates from thin pink ribbons of the meat, marbled white and rimmed with spices—served steamed, never cold—piled 9 ounces high into crisped Italian rolls delivered that day. Just as it has customers almost tasting its accompanying Dusseldorf mustard and dill pickle chips without so much as a first bite, so it lingers in the clothes of its creator, Dan Costaregni, long after the day’s last sandwich is sold. After decades steeped in the aroma, it’s maybe not so shocking he prefers the roast beef.

On a recent summer Tuesday morning, Costaregni leans back in a chair at his 55-seat restaurant off U.S. 41—a man ever relaxed, though noticeably less comfortable bearing the one-on-one spotlight than he is entertaining the extended family of patrons that rotates through his doors each day. For many a question he looks playfully to his wife, Beth, 54. She brushes him off when she can, busy preparing for the day ahead. You half expect he’ll pull her pigtail next.

“We’ve seen a lot of changes, from the ’70s, the way the town has grown,” says Costaregni, 58. “And of course there’s going to be more competition, too; there are more restaurants opening. But nobody seems to do it like us.” He adds that last observation not in a boastful way, but as if it were a pleasant surprise, a stroke of luck.

Naples may have transformed since Costaregni’s father, Dan Sr., brought the restaurant to town in 1975 from its original location in Greenwich, Connecticut. But the restaurant has been a comforting near constant among the changes. The location has shifted a few blocks a couple times; there’s now a sparsely updated Facebook page; business has picked up each year. But it’s still cash-only. It’s still closed Sundays, some Mondays, the month of September. There’s still a strong woman working just as hard as the face of the company (and sometimes keeping him in line), since Beth assumed in 1995 the integral role previously held by Costaregni’s mother, Rose. There’s still the original caricatured logo of a hunched, aproned, spatula-wielding Dan Sr. that could be mistaken for the previously mustachioed version of his son. And the deliberately limited menu reads almost exactly as it did at its 1970 inception: hot pastrami wedge, hot roast beef wedge, “super” taco, hot dog, chili, hot dog with chili. All the beef comes from—you guessed it—the shop’s original purveyor, out of the Bronx, New York.

“We introduced the beer in 1988,” Costaregni remembers, furrowing thick brows not unlike those drawn on his T-shirt and sign. He can’t think of any other differences. Here, simpler is better.

“If there’s one thing about us, I gotta say, we’re very fast. Because we’ve only got a few things on the menu, we make things quick,” Costaregni says.

“‘We’? You got a mouse in your pocket?” Beth jokes from behind the counter. “Just remember who you saw working this morning.” They tease often, but their devotion is clearly king.

When hanging around his dad’s Greenwich restaurant as a teenager, Costaregni did not feel a huge pull to become the next Pastrami Dan. Not when the two knocked heads working in Dan Sr.’s first, five-or-so-seat Naples location, which he opened on Sixth Avenue North in 1975. Not when Dan Sr. closed up shop in ’79.

“Not really,” Costaregni says. “Not till I went out in the real world and said, ‘Hey, this sucks!’” He chuckles.

In 1980 Costaregni ditched the hard labor jobs he’d been working for less than a year, and he opened up a location on Third Avenue North along with his mother. (“Saint Rose,” Beth says, never got the credit she deserved when working with her husband or her son.) That location was likewise without air-conditioning, Beth remembers well. She went into labor there with their daughter during a summer storm.

They’ve been in their current (blissfully air-conditioned) location since 1988. It has seen a much bigger storm—Hurricane Wilma, ’05—and subsequently their best day in history, thanks to being on the hospital power grid and thus one of the only restaurants in town open the next day. It has seen the Costaregnis’ daughter, Amanda, and son, Nick, join the team; seen Amanda move on to marine biology but Nick, 27, grow so invested that he plans to one day take over the business. It has seen notable regulars like author David McCullough, notable one-time visitors like Jay Leno.

“(Leno) goes, ‘Do you have any of that fatty pastrami?’ Because in California it’s lean, you know, people there are real into that,” Costaregni says. (The good stuff has to have fat running through it, has to be hot—and “You cannot do a cold roll.”) “I said, ‘Yeah, we got fatty pastrami from New York City.’ He goes, ‘I’ll take it!’ It was funny.”

As with any restaurant, the responsibility is all-consuming. The grind can be tough. Perhaps that’s why Costaregni’s father never pushed him to carry the torch; it’s certainly why Costaregni and Beth tried to steer their son away. But like his father, Nick has found joy in meeting new people, learning from them, turning them into friends. It’s all about the customers.

Even on this summer Tuesday, more than 20 file through in the first 20 minutes, well before noon, the Costaregnis and their sole employee calling order after order down the line. The first is twice-a-week patron Tim Packard, there for his favorite, tacos. (“The pastrami is my favorite also,” he says. “With no pickles.”) He’ll eat his at a table at the back, then take some to go for his daughter. All his seven brothers and sisters are fans, too. Now 52, Packard has been eating at Pastrami Dan’s since he was 16—when the tacos were 75 cents and Dan Sr. was in charge.

“It’s like the same guy!” he says, turning to Costaregni. “Your dad was just how you are, and now you’ve turned into your dad. Same personality.”

“Same personality? Me, like my dad?” Costaregni says. They had different ways of doing things, just like he and Nick do now, and streaks of stubborn. “My dad was—he had a hell of a personality. We do sound the same.”

These days the shop is the first stop for many snowbirds before they set foot in their condos, the last stop before they board their planes. A few who couldn’t wait until their return next season have even had it shipped to their northern homes. It’s an institution for locals—a go-to beach lunch or celebratory splurge or meet-up haunt with friends. (Or #hangovercure, reveals one Instagramer.)

“We get everybody from the richest people in town to just the working class,” Costaregni says. “And they’ll just mingle in here elbow to elbow, right? One guy owns a big Bentley, and another guy, working class. That’s what’s so nice about it.”

Anyone visiting for a second time is likely doing so for the same reasons. They love that a business has thrived in the community so long. They love that each time they’re going to get the exact slow-cooked top round roast beef; freshly sliced plate cut pastrami; or open-faced, crispy-cheesy-edged ground round taco they remember. And they love that it will always be served by the owners, with a side of “What have you been up to?” or “How’s the family?”

They even love good-natured Costaregni’s side of New York-style no-nonsense. (If there’s a line out the door and you’re taking too long? Step aside until you’ve got it together. And while he will substitute rye for the Italian roll upon request, even though it competes with the flavor of the pastrami, do not ask for ketchup.) The shop mostly evokes Cheers, but Nick says more than a few customers affectionately liken his dad to a character from a different sitcom: Seinfeld’s exacting Soup Nazi.

“I swear, sometimes my father—the meaner he is to people, the more they come back,” Nick says. “Me and my mother are like, ‘Dan, you gotta stop, you can’t do that, you’re gonna lose customers!’ But after they finish their sandwich, they’ll be like, ‘It was really nice meeting you!’ It’s really strange.”

Truth be told, Pastrami Dan’s has reached that icon status to some in town; anyone visiting for the first time is likely doing so after receiving an earful from a faithful cult follower. Costaregni can’t go to Publix without being recognized—or even remote Alaska, for that matter. He and his family typically head to national parks out west to beat the heat during their summer break. One year, they took a prop plane onto a glacier.

But there was that time someone told Costaregni he looked like Tom Selleck.

“When I was younger,” Costaregni assures. “I had curly hair and a mustache.” So he bought a Magnum, P.I. Crew T-shirt.

“Oh now his head’s getting bigger,” Beth interjects when she overhears. “Tell her the truth, who else do they say you look like? Mac Davis! And then another person said he looked like Gabe Kaplan from Welcome Back, Kotter.”

“Oh, God, I hope not,” he says quietly. “I like the Magnum, P.I. one, though.” Wounded, he retreats. The blow might just be enough to make him surrender.

Or not. A few minutes pass; he shares that on their free days they like to go to the beach, take out boats bartered from the watersports advertiser displayed in their napkin holders. Sometimes he rides his Harley on Sundays with friends. Then:

“Beth, what do you like to do on your time off? Do laundry?” She doesn’t hear him. Or maybe she does. “Ha ha ha. She’s gonna kill me.”