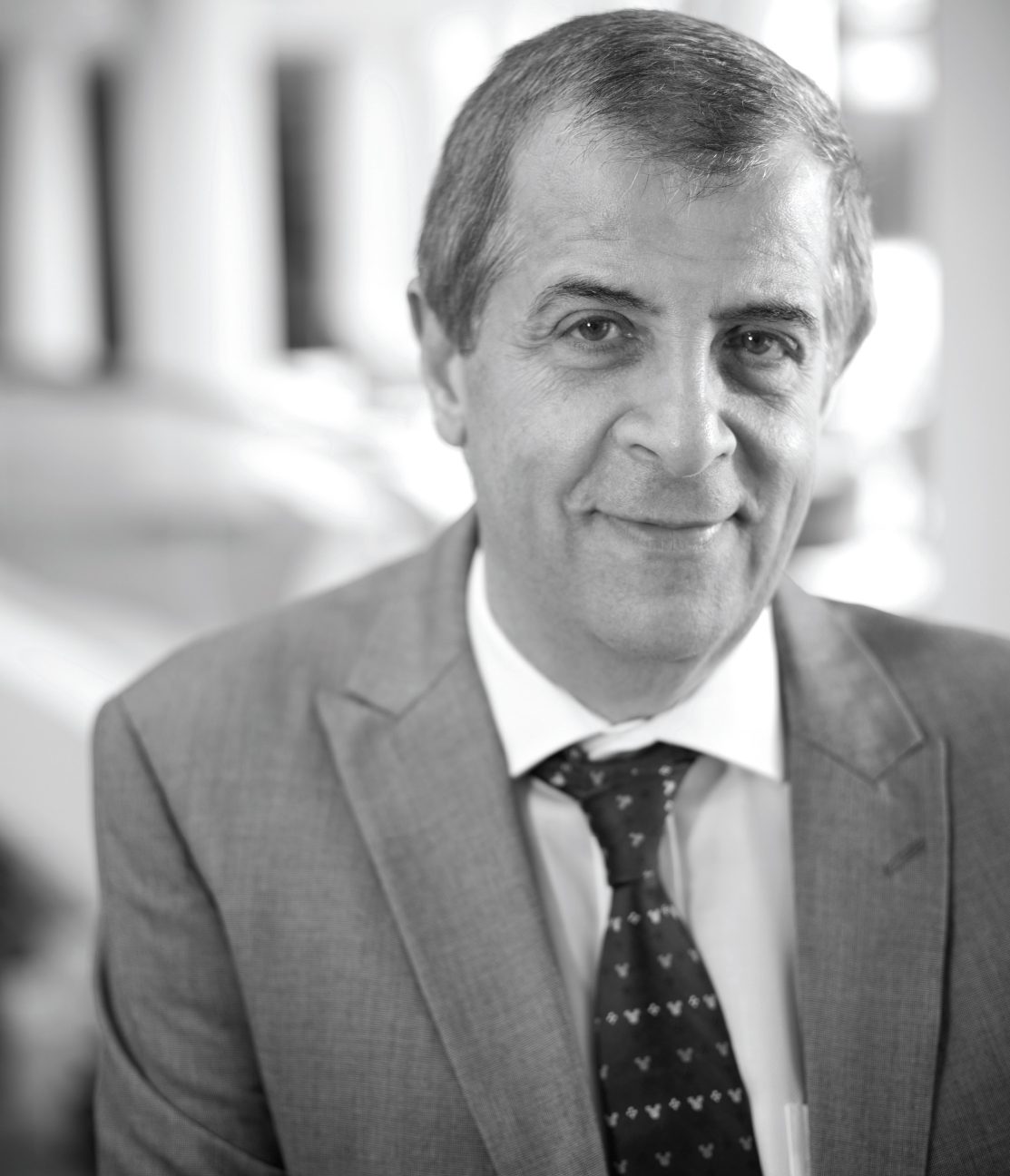 Dr. Emad Salman strolls into a hospital room on Thursday morning and is greeted by a lump on the bed.

“What’s that?” he wonders out loud, gently poking the elevated bedsheet. “Is there a person under there?”

Two big eyes and set of grinning lips appear, and then disappear. Salman laughs, clearly pleased that the 4-year-old’s cancer had not dampened his mischievousness.

The doctor is wearing a white dress shirt and red Mickey Mouse tie. He is not wearing a lab coat. He has one “because they say I need one,” but it lives on a hook on the back of his office door. Lab coats scare kids.

On April 1, Lee Health will hold the ceremonial ribbon cutting for the new Golisano Children’s Hospital of Southwest Florida, a dream some two decades in the making. This same month, Salman, the hospital’s medical director, celebrates his 20th anniversary in Southwest Florida, where he founded the region’s first full-time pediatric oncology/hematology program and went on to shape the children’s hospital culture, drive its physician recruitment and help lay the groundwork for the massive, seven-story tower looming on the HealthPark Medical Center campus.

He’s big on personality but not on ego, and he likes to focus on successes and community collaboration. Nevertheless, anyone affiliated with the children’s hospital or its parent company knows the outsized role he’s played in bringing cutting-edge pediatric medicine to a community that used to have to send its critically sick children to Tampa or Miami for care.

Salman’s story starts on the other side of the world, in Sierra Leone, where he was the eighth of 10 children born to Lebanese parents who moved there to escape the Middle Eastern chaos that followed World War I.

After high school, Salman left for England (Sierra Leone was an English-speaking British colony) to try to get into medical school. Competition for seats and restrictions on foreign students dashed his hopes of medical education in Great Britain. Instead, he went back to his parents’ homeland and won acceptance to the medical program at the American University of Beirut.

He thought he might stay long-term. But war gripped the country, and one day, a gunfight begun in the streets spilled into the emergency room. “I decided I’m done,” Salman says. “I could not continue to live like this from day to day.”

The next day, he applied for a visa to the United States, where members of his and his fiancée’s family had settled. He obtained one and was accepted to a pediatric residency at the University of Florida’s Health Science Center in Jacksonville.

Initially, Salman considered studying infectious diseases and returning to Africa. But the industrialized United States was an impractical place to gain experience in that field. A mentor, an oncologist, presented an alternative: “Spend a month with me,” Salman recalls him saying. “If you hate it, don’t do it. And if you like it, we have a position for you here.”

The young resident wavered: His brother had died of cancer. The first patient he lost during medical school had been a 2-year-old who succumbed to it. Survival rates at the time were poor. But Salman agreed to the trial period.

“It completely changed my life,” he says. “It was fun. We made it fun. A diagnosis of cancer is not fun. You can’t change the event; however, you can change the outcome by the way you react to the event.”

That attitude became Salman’s driving force—and the one that would define his work in Fort Myers.

If there were a child at risk of being lost, it was Ben Klassen. At the age of 3, Salman diagnosed Klassen with Stage 4 neuroblastoma, a type of childhood cancer that starts in early nerve cells, known as neuroblasts. “It was a very, very slim chance,” Klassen, now 19, says of his survival odds. For about the next two years, he underwent aggressive treatment: chemotherapy, radiation, surgery.

But medical interventions aren’t the only things Klassen remembers. “(Dr. Salman would) come in on a Saturday morning and make pancakes for all of us and just sit and talk to us. It would take our minds off of it.”

Among staff and parents, Salman is often likened to “Patch Adams,” the title character of the 1998 movie portraying a real-life doctor who believes in the healing power of humor.

“He’s a kid himself,” says Kathy Bridge-Liles, the hospital’s chief administrative officer. “Every Halloween he has the most incredible costumes on. … Oh, my gosh, the kids just love him.”

Sondra McCaskill, whose 7-year-old daughter, Avery, was diagnosed with leukemia in 2013, remembers peeking in the doctor’s office one day to see her daughter peering through a microscope. Beside her, Salman was explaining the contents of the slide. “I just always remember feeling completely reassured with him. … I completely entrusted her to him.”

Avery continues to make “great” progress, her mother says. And Klassen has become something of a poster child: He captained his Gulf Coast High School track and cross-country teams; served as second-in-command of his school’s Junior Reserve Officer Training Corps program; and won a full scholarship to The Citadel, where he is currently a freshman.

“Never quit,” is what he says he learned from Dr. Salman. “Never give up, no matter what odds are stacked against you.”

Following his residency, Salman relocated to the tiny Florida Panhandle town of Crestview, agreeing to practice in this medically underserved community for up to two years in order to qualify for a new visa. A year later, after recruiting two more doctors and building up a busy practice, Salman returned to oncology with a private practice in West Palm Beach.

Then, in 1997, Nemours Children’s Health System called. They wanted to introduce a pediatric oncology program in Fort Myers.

The night before Salman’s interview, spent with his wife and two children at the Sanibel Harbour Resort, ended with his kids asking: “Can we stay here forever?”

If family enthusiasm was one half of the equation, administrative support was the other. Nemours at the time was providing pediatric medical services; Lee Health (then Lee Memorial Health System) provided the facilities.

The Lee Health commitment felt genuine (and would become critical when Nemours pulled out of Southwest Florida in 2001), Salman says. And he discovered a community partner in Barbara’s Friends, a fundraising organization founded in 1995 by Frank and Betty Haskell to honor their daughter, who died of breast cancer.

“We were allowed by the system to see every patient that walked in our doors, no questions asked,” Salman says. Such practices are not universal.

Later, the community went full-throttle in its support, raising $100 million toward the new Golisano Children’s Hospital of Southwest Florida. Salman even recalls getting $30 in pennies from a group of school children. “To me,” the doctor says, “that’s as important as $20 million.”

“Yes, we are providing the services,” he says, “but we couldn’t do it without the support.”

Today, Salman and the hospital staff have developed a reputation for excellence (patient satisfaction scores are consistently in the 90s). But newcomer Salman knew he had much to prove.

“I made a commitment at that time that if I’m gonna do this job, I’m gonna do it at 150 percent. No time off. No vacation. After I give a child chemotherapy, I need to be available to them when they have complications. It isn’t at my convenience. I need to be there for them all of the time,” he says.

His wife, Alissar, remembers those years.

“It was hard, but at the same time, how can you compete? He was taking care of sick kids. I figured God gave me healthy kids so my husband can do what he does,” she says. She had attended law school in Lebanon but did not practice in the United States, choosing instead to manage their household and children. “She’s been my backbone, my support,” her husband says. “She’s been the person in the shadows to keep me in the limelight.”

Though a young practitioner at the time, Salman had seen enough to know what he liked and didn’t like in health care systems. In his, he would insist on a whole-person, family-
centered approach.

He not only hired highly skilled oncology nurses but also brought on other experts—child life specialists, psychologists, social workers, pharmacists.

They meet every morning to review the progress of each hospitalized oncology/hematology patient—from medical data to social, emotional and psychological observations. A 12-year-old’s anxiety over a medical test received the same amount of attention as her lab results during one such meeting.

Salman’s philosophy spread from the hematology/oncology unit to the rest of the children’s hospital. He was promoted to medical director in 2010.

“That consistent message of doing the right things for the right reasons is evident here, and Emad embodies that,” says pediatric surgeon Dr. Robert Minkes, who recently left a children’s hospital in Texas to join Golisano Children’s Hospital.

Salman keeps a firm hand in patient care—his first love—but spends much of his time managing hospital-wide matters. In the past six years, the medical staff has doubled to 96. Specialty clinics have opened in Charlotte and Collier counties. Salman and hospital leaders are partnering with community organizations to address challenges like childhood obesity and mental health. He’s guiding protocol development to lessen the chances of medical errors. And all the while, he’s been watching the new building—what he calls “a monument to a dream”—grow outside HealthPark’s windows.

“It’s a challenge, but it’s also a huge privilege for every one of us that has been involved,” Salman says. “This hospital will outlive every single one of us. Just think about that: Forty years from now, I’ll be long gone, but the building blocks we started and built will be here. That’s the legacy.”