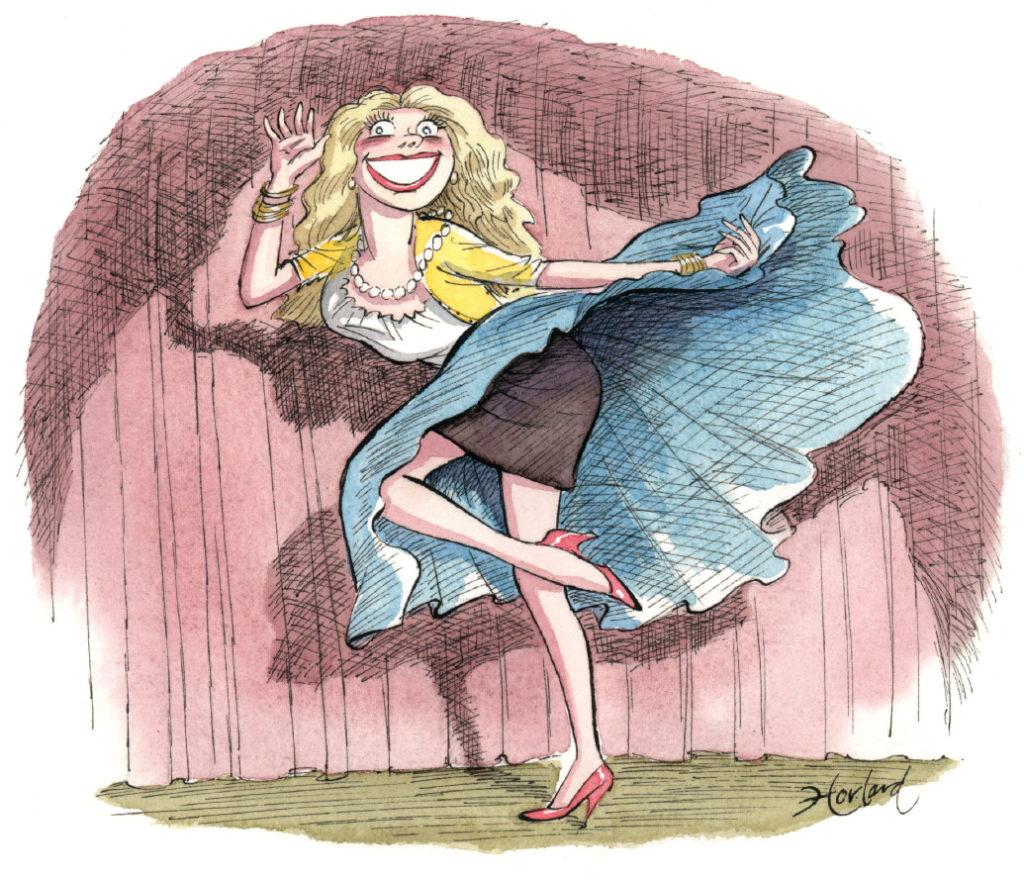 I’ve always wanted to be an actress. When I was little, I would improvise one-woman shows in our living room for my parents and their friends, which always ended with me dying a slow, terribly dramatic death with lots of raspy coughing (I blame this on watching way too much General Hospital).

In my teens, I’d practice my Oscars acceptance speech in front of our bathroom mirror—I was always surprised, humble, and I never forgot to thank “the little people.” Finally, in my 20s, I did start acting and took to local stages whenever I could find the time. And as much as I enjoyed it, time was the reason I didn’t do more of it. Theater is incredibly time-consuming, and unless you’re making a living at it (which is very rare for most actors, especially here in Southwest Florida), traipsing around on a stage is a creative luxury few can afford. It wasn’t until I became an adult and had an electric bill to pay that I understood what my mother meant whenever I would tell her that I was going to be a rich and famous actress: “That’s wonderful, honey—and I believe in you—but, it’s also important to know how to type.”

For the past 10 years or so, when I do actually act in a play, it’s usually a very limited run and mostly community theater. In community theater, troupes rehearse only a few nights a week and the actual run is typically only around nine shows stretched over three weeks. And, honestly, it’s been a long time since I’ve even done that. I definitely get bitten by the acting bug now and then, but I’m far too selfish with my time to get caught up in the smell of the greasepaint and the roar of the crowd very often. I’m much fonder of my couch, a bottle of wine and Netflix than I am of the stage lights and the applause.

So then, why did I decide recently to devote more than two months to doing a show that ran for more than six weeks and had 58 performances? Because it was an adventure, of course.

If you’re doing the math, you’re likely wondering how one can do 58 performances in less than 58 days, and that’s where I’d like to tell you about what’s known as the “triple/double.” That’s when you do two shows a day for three days in a row. But more on that later.

On Jan. 3, I started rehearsals for The Savannah Sipping Society, a fun comedy about four spirited Southern women who meet and become close friends over a series of happy hours. I wanted to do the show because I knew it would be a challenge and an adventure—but also because I loved the feel-good script and the character I was playing (Randa, a quirky architect who had just lost her job, but gained three new friends), and because it was at the Off Broadway Palm Dinner Theatre in Fort Myers. The main stage at “The Palm” is huge and seats up to 400 people, but the smaller stage is cozy, intimate and seats only 90. It’s a lovely little black-box theater, and the owners, the Prather family, are lovely folks to work for. Not only that, I got to act with three wonderful actresses who are dear friends—Kelly Legaretta, ML Graham and Donna Schulte.

Whenever I’ve done a show, it seems that the first question I get from friends who aren’t theater people is, “How did you learn all of those LINES?” So please trust me when I say learning lines is the easiest part. Think of it like this—you probably know all the words to the song Jingle Bells, right? Yet, you never sat down with the words on paper and memorized it over and over and over again. Studying the script is important for line memorization, but for most actors, the lines are coupled with movement, and, luckily, the brain kicks in and does the work. Lines are easy—the rest of it is the challenge.

The Savannah Sipping Society is an ensemble show, meaning there is no leading role. So, with the exception of quick changes, all four of us were onstage for the entire two-hour play. I’ve had strenuous workouts with a trainer that weren’t as exhausting—and when it was a triple/double, my endurance for this adventure was truly tested. But it never got boring; the great thing about live theater is that every show is different.

There were several times when we were upstaged by cellphones, despite a curtain speech each night reminding audience members to silence them. It’s one thing for a cellphone to ring during a performance, but quite another when an audience member answers the phone and commences conversation. One grace-under-pressure moment was during a moving, poignant soliloquy very near the end of the show, when the character of Jinx talks about her fear of growing old alone. It’s a really lovely and very, very quiet piece—the actress, ML, is in a pin spotlight while the rest of us are onstage watching in the dark. The speech is special for a variety of reasons, but one of the most special is because this is the first time that Jinx, the life coach/ring leader of the group, really reveals her vulnerabilities and fears—and ML did a beautiful job with it every performance. We could feel the audience hanging on her every word, and you could hear a pin drop. One night, as she started the piece, we heard the tinkling of a cellphone in the tiny theater. ML started the speech anyway, assuming the offender would silence his phone, but instead, he answered it in a full, deep voice: “Hello? … Uh-huh … I’m in a show … Yeah, it’s pretty good … Tomorrow? … Maybe …” And it continued as ML stopped speaking and stood silently in her spotlight looking straight out. The rest of audience began hushing the man, hissing angry “sssshhh” noises in his direction. It seemed to go on forever, as ML continued to stand in silence. Our stage manager started to get out of the lighting booth to escort the man out when another audience member shouted from across the room, “Shut UP!” The man on the phone responded, “I’m almost done!” Finally, the man hung up, and after a beat, ML continued the speech with strength and managed not to pull a Patti LuPone (famous for calling out cellphone offenders in her Broadway audiences).

At another performance, the cast really came together when we were doing the last few scenes in the play. The show had about 15 minutes left in it, when we noticed one of the actresses was having trouble remembering her lines, perspiring and holding onto furniture to stay upright. She couldn’t communicate what was wrong, so we jumped in and said her lines for her. When one of us had to walk offstage for a prop, we’d bring her a glass of water. She never broke character and neither did we—the audience had no idea there was anything wrong. After the show, an ambulance was called, and it turned out she was having a hypoglycemic episode. For the second showing that night, an understudy went on for her with a script in hand (which was definitely an adventure for the understudy).

Then there was the time we were all onstage and heard a lady in the front row say to her companion, “They’re all so big-busted!” Note to audience members: We can hear you. Another time, we came out onstage and the furniture hadn’t been set for the scene. Because we were supposed to sit in chairs at a table, we improvised by sitting on the floor—the audience was none the wiser. And during a quick change, I was rushing so fast that I put my shirt on inside-out. I wondered what the audience was twittering about until I got offstage and looked in a mirror.

All snafus aside, I think what I learned the most from this adventure is that actors are truly some of the strongest, most dedicated people ever. They’re physically strong, mentally sharp and fearless. They’re hugely empathetic, kind, and they live to entertain and to make people think. No matter how tired we were after a long day of performing, we came offstage laughing and energized to run out for our curtain call. And after every performance, one of us would say something like, “We sure did make those people happy tonight.” That makes for a delightful adventure, indeed—and the good news is, I didn’t (actually) break a leg.