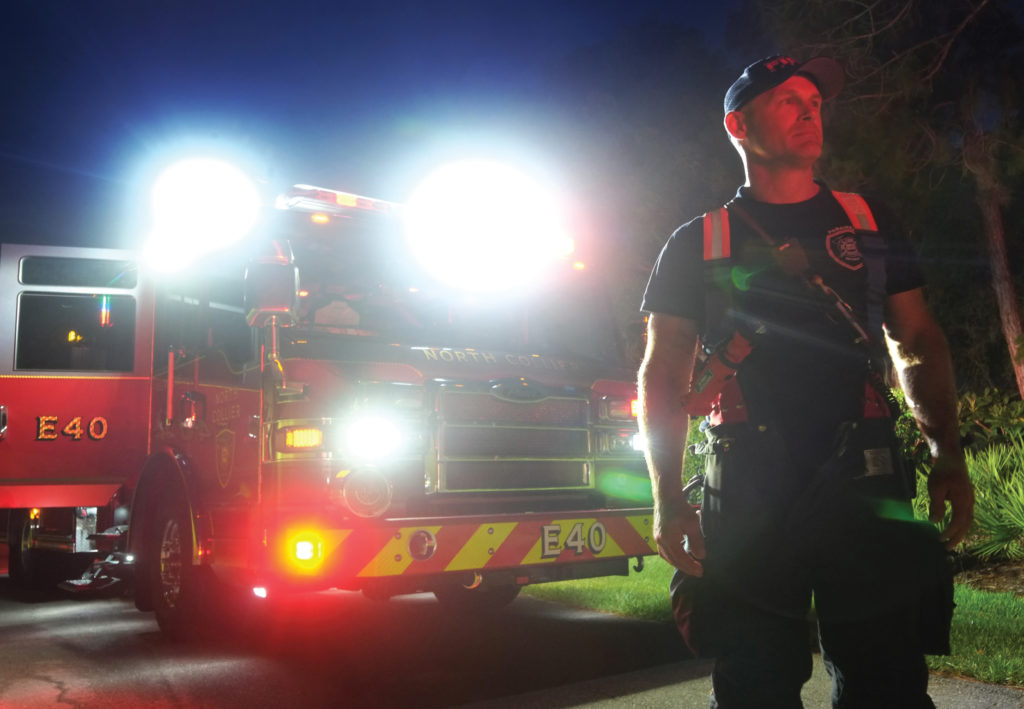 A-shift of Station 40 at the North Collier Fire District comes on at 8 a.m., but by 7:30 a.m. the four-man crew is already starting to arrive at the station. Ken Duffy, the crew lieutenant, is there first. Muscular and confident, he takes a seat at the long dining table. At 50, he’s the oldest man on the crew. John McDaniel, A-shift’s engineer, pours himself a cup of coffee in the kitchen. McDaniel is lean and athletic, serious and articulate. He spent four years in the Navy before joining the fire department. Daniel Jackson strolls through the door a moment later and heads for the cold brew in the fridge. The other guys call him “Gaston,” presumably because he’s Disney character-handsome with a cleft in his chin and a thick barrel chest. Jackson played professional baseball before becoming a firefighter. The fourth man, Gregg Abenanti, will be coming later.

In the spring of 2017, the North Collier Fire District logged more than 1,500 hours fighting the brushfires known in the department as the 30th Avenue fires. With the onset of the rainy season, the fires subsided and the department caught its breath—but not for long. Even in the wet months, the Collier County fire department never sits still. I wanted to spend an entire shift with a crew to see what it’s like outside of the busy brushfire season, and what I discovered was some of the hardest-working, hardest-laughing and all around most decent people I’ve ever had the pleasure of spending 24 hours with.

At 8 a.m., A-shift is officially on-duty. The men go over the firetruck to make sure all the equipment is there and working. McDaniel checks the water in the tank while Jackson and Duffy inspect their air packs, testing the regulators and air supply.

“The job is very ritual-oriented,” Duffy tells me. “We all do the same things every shift. From the minute I turn my truck off in the parking lot, it’s the same. I come in, I lay my clothes on the bed, I check my gear.”

The rituals are essential, he says, not just for the smooth transition between shifts but to ensure that the engine and its crew are always ready.

“We never go down. The engine never goes down.”

There are 264 square miles in the fire district, and Engine 40 supplies an immediate response to a 4.5-square-mile radius around the station, though it can be used anywhere. The national standard is a 4- to 6-minute response time on all calls. That may not seem long, Duffy tells me, but if you have a loved one who’s having a cardiac arrest it can feel like forever.

Once the truck and equipment check out, it’s time for the morning workout. McDaniel—whom the men call “Johnny Mac”—leads the routine.

“You may see a couple of grown men cry,” Duffy says, picking up a jump rope.

It’s true that firefighters have a certain beefcake image (Duffy, in full disclosure, was Mr. June for one of the district’s calendars), but physical fitness is essential to the job. The equipment that each man carries weighs roughly 80 pounds, and that’s to say nothing of the ladders, hoses, axes and pikes they also haul around. A call can leave a man—even a man in excellent shape—physically drained.

“It’s like moving an apartment by yourself,” Duffy tells me. “Your muscles are aching; you’re worn out.”

In the engine bay, OutKast sings The Way You Move while the men laugh and chide each other as they sweat in the 90-degree heat. It’s 9:30 a.m. Suddenly a white strobe light flashes and a loud tone ricochets off the concrete floor and walls. My heart jumps and my palms sweat. The three men calmly set down their workout equipment. McDaniel turns off the radio. They step into their waiting boots.

In the truck McDaniel drives, Duffy rides right seat and Jackson, who is also a paramedic, straps on rubber gloves. There’s no chitchat, no sign of the jovial men I’d just seen lifting weights. I think of something Duffy told me earlier: “When the truck rolls out, it’s all business.”

On Pine Ridge Road near the on-ramp to I-75, we pull up to a three-car fender-bender. Two police cars and an ambulance are already on the scene, and Jackson and McDaniel get out to help load a woman into the ambulance. Everyone else at the scene is unhurt and there’s not much to do. By 10 a.m. we’re back at the fire station.

I ask when they think the next call will come in, and they tell me there’s no way to know.

Duffy nods. “All through the night. We got back at 3, hosed off the truck, showered, in bed at 3:30—boom, another call.” He shakes his head. “I don’t know what’s going to happen today.”

“It’s probably going to be the best tuna salad you’ve ever had. I’m just saying.”

We’re in the bakery section when a call comes in. We turn and head to the truck, but by the time we get outside another engine has taken it. We go back inside to finish shopping. On the return drive to the station another call comes in, this one about an assault. But before we go far Engine 46 says it’s closer.

Back at the station the fourth member of the crew arrives. Gregg Abenanti has copper hair, a thick mustache, bright blue eyes and a tall, broad-shouldered build. He looks more Irish than Italian but swears his genes are split right down the middle. He likes to play up the redneck stereotype, but get him talking about books and you see it’s just an act.

By 2 p.m. the atmosphere inside the fire station is restless. McDaniel sits at the dining table working a crossword puzzle.

“All dressed up and no place to go,” he says.

Abenanti sits across from him. “We get a lot of that.”

“You could kill a small donkey with the caffeine I’ve had today,” Jackson says from the kitchen.

At 2:30 p.m. we head out into the bay. Duffy wants Abenanti and Jackson to do drills with the ladder and the K-12 saw before the afternoon storms blow in. The two men horse around and wrestle on the concrete floor before suiting up, all that coffee and cabin fever working its way out. At 3:25 p.m. a light shower passes but no heavy rain. No calls, either. At 4:15 p.m. they work out again. At 5:30 p.m. Abenanti is in the kitchen making dinner. He explains to me that cooking at a fire station requires certain practical concerns, how you can never make a roux or a béchamel sauce, nothing that can’t be turned off or that needs to be served hot.

Duffy, at the table, says, “You take a shift like this. Especially after last shift.”

We eat at 7:30 p.m. Jeopardy plays on the television. After dinner, they clean the kitchen and mop the floors. At 8:35 p.m. the music is going, Abenanti and Jackson singing Never Gonna Give You Up by Rick Astley.

“This job is 90 percent down time, 10 percent action,” McDaniel tells me.

At 8:48 p.m. the strobe lights flash and the tone sounds. This time it’s a structure fire. On the ride there, Abenanti and Jackson are in the back with me. Both are keyed up.

“Remember the kid in A Christmas Story when he falls down in the snow and can’t get up?” Jackson says once he’s suited in. “That’s me.”

As we get closer, word comes over the mobile data terminal about the nature of the call. A port-a-potty is on fire. The men, to their credit, are unwavering in their seriousness. Abenanti and Jackson break open the port-a-potty door with an axe. They yell, “Strike!” before they make the first hit while the homeowner stands off to the side calling, “Get it, boys!” They douse the inside with a hose, and the nighttime air smells like burning plastic.

Once they’ve finished, and while Duffy checks over the scene, Abenanti and Jackson climb back in the truck.

“I can’t believe we just forced a port-a-potty,” Abenanti says, laughing in a delighted way. He turns to me and gives me his most stern face. “The point is, we take every fire seriously.”

“We don’t get complacent,” Jackson says.

Abenanti shakes his finger emphatically. “We don’t get complacent on Engine 40.”

On the drive back to the station, they run through the moments of the call like athletes replaying a great play.

“Is that the first fire you forced the door on?” Abenanti asks Jackson.

A few minutes later, over the headset, Abenanti asks, “What’s the name of Mrs. O’Leary’s cow?” He’s referencing the famously alleged cause of the Great Chicago Fire in 1871.

We’re back at the station by 9:30 p.m. The men make themselves bowls of ice cream and settle around the table.

“Firemen are a superstitious bunch,” Abenanti tells me. “If you have a slow day, you usually pay for it at night.”

Yet there is another, maybe more powerful, superstition at firehouses: the myth of the white cloud. Sometimes a person comes for a ride along and not a single call comes in. That person is deemed a “white cloud.” And, as it turns out, I’m one.

My alarm goes off at 6 a.m., and I lie in bed marveling that we made it through the night without a single call. The shift is nearly done. I’m still in bed at 6:12 a.m. when a red light comes on in the dark room, lighting it up like a submarine, and a harsh tone sounds through the station. I’m out of bed and putting on my shoes when Jackson runs down the hall looking for me.

We’re back in the truck. No one talks. The call is for a residential structure fire. At a ranch house in a quiet neighborhood, a woman stands on her front lawn clutching a white cat. The sky is early-morning gray. The firetruck’s red lights slide over the loquat trees and jasmine blooms in her yard, and the woman looks small and helpless in her pajamas. The firefighters—men I have seen laughing, dancing, singing, wrestling, eating ice cream—are stone-faced. The beams of their flashlights cut through the darkened house as they search for the source of the smoke. They find it: an electrical panel in a bathroom has caught fire. Quickly, they extinguish the flames and rip out drywall in order to follow the smoking wires into the ceiling. They’re able to stop the fire before it can spread into the attic and the rest of the house.

When it’s all over, I watch from beside the truck as the firefighters reload their equipment. They fold the hose in precise rounds and store the axe and pike for the next time. I’m reminded of something Abenanti told me the day before, when I asked if it’s stressful, the constant calls, the never knowing what the next hour will bring.

“I like the uncertainty of it,” he’d said. “You get to see what you’re made of.”