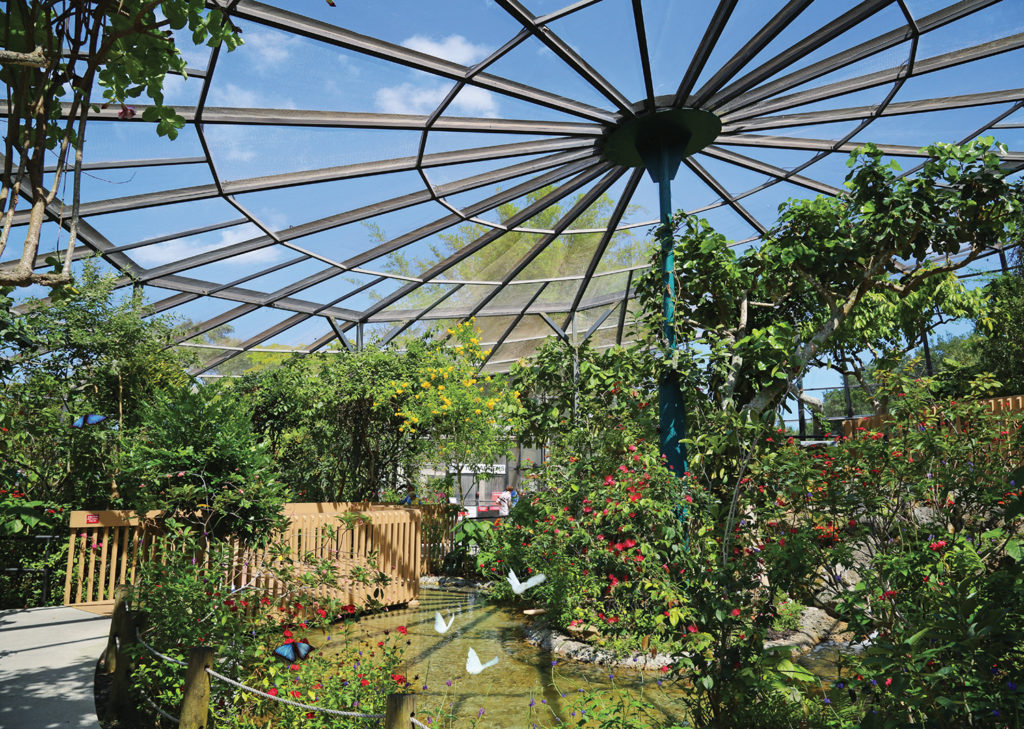 I discovered the wonders of Butterfly World, just north of Pompano Beach, entirely by accident. I’d set off on one of my day trips across the state, dreaming of a long afternoon spent in a museum, when I pulled into the museum’s parking lot and saw that it was closed.

“Are you from around here?” I asked a couple who, like me, were surprised to find the museum shut down for the day. “I drove all the way from the other coast, and I’d hate to go back without seeing something.”

The couple didn’t hesitate an instant.

“Have you been to Butterfly World?” the woman asked. “It’s amazing.”

“Way better than this place,” the man said, hooking a thumb over his shoulder at the barred museum doors.

Butterfly World, according to the sign at its front entrance, is the largest butterfly park in the world and the first of its kind in the western hemisphere. How, I wondered, on all my trips around the state, had I missed it?

It was raining as I parked and dashed to the door, but by the time I bought my ticket and stepped into the outdoor butterfly enclosure, the downpour had become a sprinkle. I stood in the light drizzle and looked around the screened-in aviary, noticing at once the flowers—purple porter weed, red pentas, pink powder puff, tropical rhododendron, queen’s wreath and monkey brush vine. I stooped down to admire a row of potted orchids and overheard a woman and her two young daughters as they stepped into the enclosure behind me.

The other little girl, not more than a toddler, started to emit a high-pitched noise somewhere between a squeal and a scream.

“Don’t scream, don’t scream,” her mother said, but it was too late. The little girl was letting out a sound of pure delight.

I turned to see what was causing the ruckus and stopped, my mouth open. In the time it’d taken to admire the orchids, the sun had come out in full. Butterflies were rising from the flowering plants, their iridescent wings spread to catch the light. They drifted on currents of air, careening and floating, chased each other between the leaves and dipped and settled on the flowers spread across the enclosure.

I could have stayed all day, but there was more to see. I left the butterflies and strolled past aviaries filled with tropical birds, a maze planted with flowering vines and something mysteriously called the Lorikeet Experience. At this last one, I stopped and peered inside. The enclosure was filled with brightly colored lorikeets and a man sitting beside a cooler. He beckoned me inside and handed me a plastic cup of juice.

“Hold the cup like this,” he said, demonstrating. “With two hands.”

I held the cup like he showed me, and suddenly my arms were lined with the birds, their purple heads bobbing, their green bodies rocking and swaying as they jostled for space. They chirped and nudged each other out of the way, clinging lightly to my arms as they sipped at the juice. When the cup was empty, they flew away. It took all my strength to thank the nice man and leave, when what I really wanted to do was spend the rest of the day feeding those beautiful birds.

The Bug Zoo is the only part of the park indoors and the only place where the creatures are, thankfully, behind glass. The zoo housed all manner of hairy, spiny, poisonous insects. There were scorpions, centipedes, tarantulas and a bird-eating spider the size of my fist with the hind legs of a lizard hanging out of its mouth.

It was all so delightful—so wild and unexpected—that I completely forgot about the museum I’d driven over to see. The people I’d bumped into had been right. This place was way better.