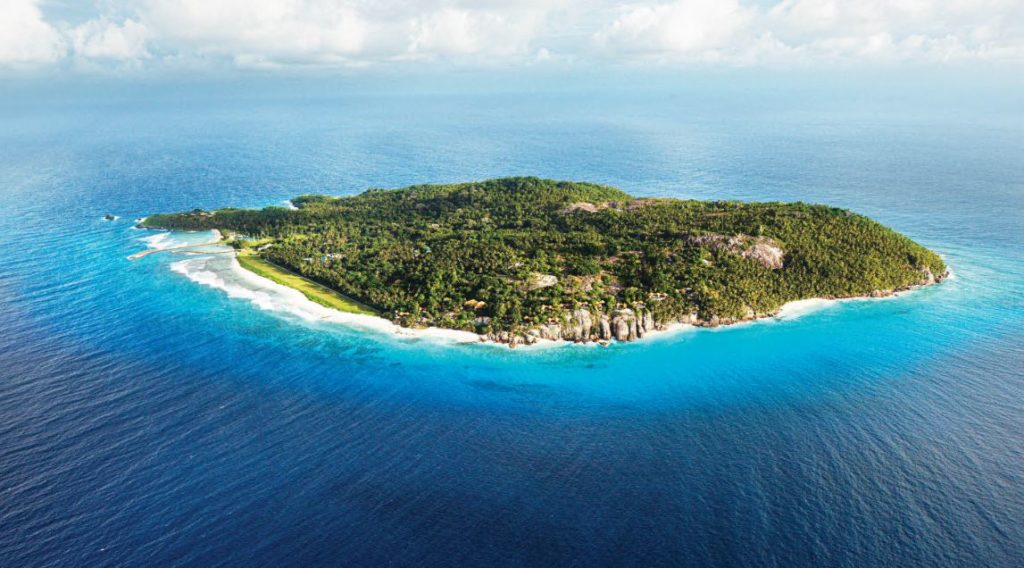 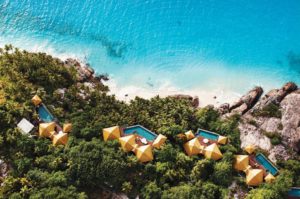 STEAL AWAY TO A PRIVATE ISLAND REFUGE

Overtourism is a leading concern in the travel sphere, as people trample over famous destinations and landmarks. Mindful travelers know to escape to lesser-known places. Within fan-favorite Seychelles, the island of Fregate flies under the radar with just under a quarter million tourists per year. Fregate Island Private resort—which sleeps 40—hosts a mere fraction of that.

A pirate hideaway in the 17th century, the 115 granite and coral island archipelago hasn’t changed much in 300 years. Beyond its brief stint as a buccaneer base, the isles were left practically untouched. Sitting in isolation, Fregate flourished into a “Mini Galapagos,” where wildlife, such as rare magpie robins, 3,000 giant tortoises and critters not found anywhere else in the world, run the roost.

A German billionaire first built a hotel on the island in the late ’90s—and now it’s part of the uber-luxe Oetker Collection—but Fregate has delicately balanced nature and human interaction. The 17 thatched-roof villas sit high above the granite coastline and seem to disappear among the tens of thousands of trees planted to rehabilitate the forest. Guests are encouraged to join the team of onsite ecologists in helping tag birds and aiding turtle hatchlings. All in all, your stay will be akin to a six-star Palace hotel in Paris, but with the natural beauty of an off-the-grid oasis. From $5,000 per night for double occupancy, with butler service; fregate.com. Photo courtesy Fregate Island 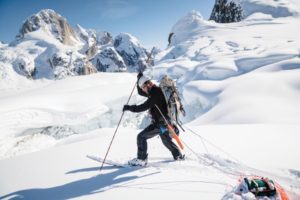 SLEEP ON A GLACIER IN ALASKA

At Sheldon Chalet, a mountain hut-turned-luxury lodge built on a rocky glacier in Denali National Park & Preserve, you’ll sleep in one of the most remote properties on the planet. Purchased by bush pilot legend Don Sheldon before the park was established, the property sits on five acres on the fringes of the tallest peak in America, allowing you the mountaineer experience without the risk. Robert Sheldon adopted much of his parents’ design, sketched in the 1960s when they first dreamed up the project, to build the chalet. His swank version is nearly carbon-neutral with solar panels and a Finnish fireplace that provides clean-combustion heat. In support of the local economy, most of  the decor was made by Alaskan hands. “Fabrics, furniture and utensils are carefully matched to complement and accent the surrounding nature,” Robert Sheldon explains, adding that he wanted to ensure that his family’s vision to help travelers connect to Denali didn’t compromise the health of  the environment.

To get there, you’ll fly into Anchorage, drive two and a half hours to the tiny town of Talkeetna, then take a 45-minute helicopter ride through narrow canyon slots until you arrive at the casually elegant abode where there will be Champagne waiting. Since everyone (and everything) has to be flown in and out of the five-bedroom property, waste is kept to a minimum by repurposing and recycling. Running water comes from glacial snow the crew melts before guests arrive, and fresh food like Alaskan king crab and Copper River salmon are pulled in by sled.

A major perk of sleeping in a totally undeveloped area? Pollution-free skies make for prime aurora-spotting from mid-September through mid-April. While you can easily curl up and admire the skies through the gallery windows that encircle the chalet, there’s nothing quite like being directly underneath the aurora as it dances across the sky. After a day of glacier trekking (your stay here comes with a staff of four, including two adventure guides, a concierge and a private chef who once cooked for Neil Young), watch the show from the warmth of the rooftop hot tub or while eating a chef-cooked meal at a table carved into the ice and topped with waterproof cushions and faux fur throws. With no cell reception or Wi-Fi, you’ll have no choice but to disconnect in these majestic mountains. From $3,100 per person, including meals, guided glacier tours and helicopter transfers; sheldonchalet.com. Photo courtesy Sheldon Chalet 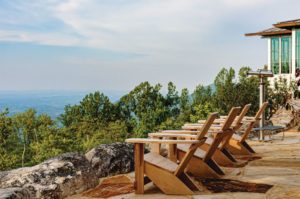 GET BACK TO THE LAND IN THE SMOKIES

If you think the Tennessee Smokies are just Gatlinburg and Dollywood, then you haven’t really done the Smokies. Get a proper introduction at the 36-guestroom Blackberry Mountain. Seven miles down the road from insider-favorite, Relais & Châteaux resort Blackberry Farm, the inn sits in the Great Smoky Mountains. More than half of the 5,200-acre tract is set aside for conservation, and cottages are constructed from reclaimed materials and stones sourced from the mountain. Similar to its famed sister property, the resort’s farm-to-table cuisine is the star, with just about everything that touches your plate coming from the on-site garden and an army of growers, butchers and other food artisans that hand-make honeys, cured meats, preserves and breads. The chefs cook up a range of dishes classified as Foothills Cuisine, which honors Cherokee agricultural traditions and unique-to-the-Smokies ingredients, such as ramps and sumac.

Sense of place carries through into the art, as well. The curator scrolled through Instagram to find local and other emerging Southern artists. Admire the works, then tap into the century-old heritage of Appalachian craftsmanship with workshops in wheelthrown pottery or basket-weaving with grapevine from the surrounding forests. The standout art piece, though, is the 22-foot, wooden troll crafted by Danish sculptor Thomas Dambo—it’s hidden in the woods to encourage guests to get out and explore the dozens of miles of private trails accessible by foot, mountain bike or a loaner Lexus GX. From $1,595 per night with a three-night minimum; blackberrymountain.com. Photo courtesy Blackberry Mountain. 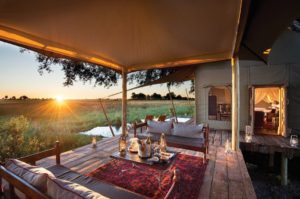 African safaris are at the top of most travelers’ lists, but the trek is costly and complicated to plan. Given the remote nature of the lodges, it’s not exactly an eco-friendly jaunt, either. Enter Roar Africa and Emirates, which together are redefining the way we fly with a first-of-its-kind private jet safari. Roar Africa, a bespoke travel company known for its insider experiences like booking you a visit with Mandela’s family or dining at the president’s home in South Africa, is leading the charge on the itineraries. The duo’s “The Greatest Safari on Earth” takes off in September.

When it comes to travel, planes are the biggest offenders (one flight across the Atlantic emits enough carbon dioxide to melt 30 square feet of Arctic sea ice). On the other hand, seeing the world and getting up close with wildlife is the best way to appreciate nature and learn to protect it. To balance both sides, all flights and ground transportation on this trip are carbon-neutral, meaning any environmental cost is offset by efforts that rebuild, such as funding solar power projects, planting trees and providing clean water to communities visited.

In less than two weeks, you’ll check off five bucket list destinations in Africa, where you’ll see 200,000 animals on the move during the Great Migration across Botswana, soar by hot air balloon over Kenya’s Maasai Mara and trek with mountain gorillas on the volcanic slopes of the Virunga Mountains in Rwanda.

Of course, accommodations on the ground are as plush as they come, and you won’t have to compromise creature comforts on the journey. Open to only 10 guests at a time, the flights aboard Emirates’ Executive Jet come with a shower and doored suites, each with a mini-bar, lie-flat bed and feather pillows. Between destinations, you’ll sip on Champagne from the on-board cellar while screening documentaries about the destinations you’ll be visiting. $125,000 per person (a portion of proceeds benefits the Great Plains Foundation); roarafrica.com/the-greatest-safari-on-earth. Photo courtesy Roar Africa and Emirates Executive.