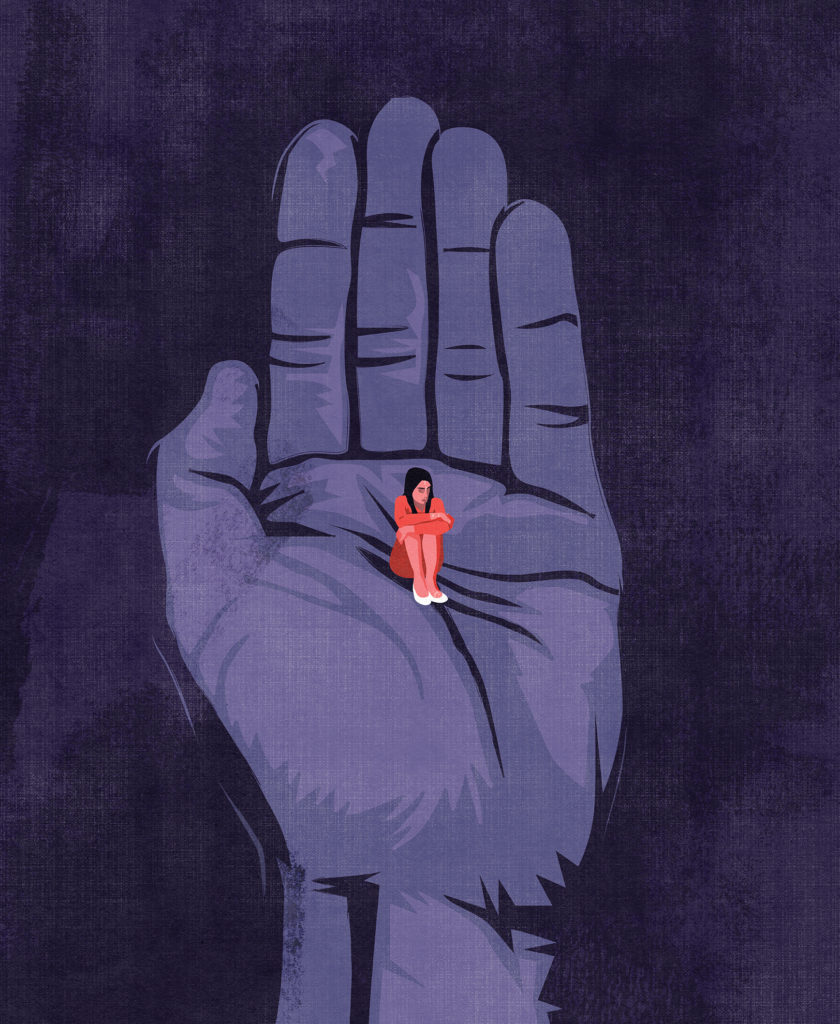 Female workers at a now-defunct Southwest Florida farm said three men in positions of authority regularly groped, propositioned, and raped or attempted to rape them. All five women were fired for opposing the sexual harassment.

In 2016, a female former fire captain filed suit against the Greater Naples Fire District and its chief, Kingman Schuldt, describing a “pattern and practice of permitting, condoning and even encouraging sexual harassment and discrimination.”

Even one of Southwest Florida’s most powerful women, state Sen. Lizbeth Benacquisto, a Fort Myers Republican, said in a December statement that a former Republican lawmaker appointed to a state commission, Ritch Workman, “pushed his body up against me and made vulgar and inappropriate gestures” the year before. Workman subsequently resigned.

By now, it should come as no surprise: There are legions of Southwest Florida women, and certainly men as well, who can say “me too” to being subjected to:

The scope of the problem is difficult to define here, or anywhere else for that matter, because most legal cases are settled confidentially. But we can tell you this: The conditions that breed sexual harassment may be ripe in Southwest Florida. In the agricultural sector, undocumented immigrant women are vulnerable targets; in restaurant and service jobs, young women and working moms may fear speaking out lest their bosses let them go.

“It cuts across all fields,” says Bradley P. Rothman, a Naples-based lawyer who has been representing sexual harassment victims since 2007. “We’ve seen it with news organizations, religious organizations, restaurants, in the hospitality fields and involving all socioeconomic spheres, from farmworkers to the highest levels of competency.

“How frequently it happens on a percentage basis, it’s hard to know.”

Jason Gunter, a Fort Myers attorney who estimates he has handled roughly 100 sexual harassment cases in 18 years, offers some welcome news, however.

“For the most part, really, the employers, not all of them but the larger ones you can think of in Southwest Florida, do try. … They’re not going to put up with it,” he says.

Both lawyers declined to provide details of cases due to confidentiality.

To file a lawsuit alleging discrimination (that’s how sexual harassment cases are legally classified), a person must first file a charge with U.S. Equal Employment Opportunity Commission, which will investigate the charge and determine whether the person has the right to sue in state or federal court. (In EEOC speak, a charge means a claim and not a criminal case.)

From 2015 through 2017, there were 55 charges made in Lee and 31 made in Collier. The details of those are confidential, an EEOC spokeswoman says. However, the commission filed two cases in Lee and Collier counties in the past few years, according to the spokeswoman. Both involved female agricultural workers. But based on cases that have come to light outside of that process and interviews with employment lawyers, it’s clear problems exist in many industries.

Victoria Mesa-Estrada, a lawyer for Florida Legal Services in Palm Beach, takes cases from farmworkers across the state, but a common trait in the sexual harassment allegations she fields is the location: Southwest Florida.

The propensity, she believes, is due to this region being home to nurseries and some of the biggest packinghouses, the kind of agricultural work that has historically been tasked to women. People working in the fields are mostly men, she notes.

But few contacts lead to cases. Women, particularly those who are undocumented immigrants, fear losing their jobs because they have so few options.

“When you ask, ‘Why didn’t you complain before?’ The common thread is typically the economic need and their immigration status,” she says. “You’ve got to feed a family, and that comes first.”

In 2012, Mesa-Estrada helped an indigenous woman from Mexico who said her supervisor was sexually harassing her. The harassment took place at a nursery and was settled through mediation with the EEOC, Mesa-Estrada says.

A case involving a tomato company is in the early stages of investigation. Her client works in a lab and has been sexually harassed by her supervisor, she says.

Mesa-Estrada also represented female farmworkers in a case filed in 2014 involving a produce growing and packing operation in Felda in Hendry County, just east of Lee County. That case resulted in a federal jury returning a unanimous 2015 verdict awarding $17.4 million to the five ex-employees of Moreno Farms, the now-defunct operation previously mentioned.

“Two sons of the owner of Moreno Farms and a third male supervisor engaged in graphic acts of sexual harassment against female workers in Moreno Farms’ packaging house, including regular groping and propositioning, threatening female employees with termination if they refused the supervisors’ sexual advances, and attempting to rape, and raping, multiple female employees,” a 2015 EEOC press release said. “All five women were ultimately fired for opposing the three men’s sexual harassment.”

The commission has recognized immigrant farmworkers are vulnerable and has made protecting their legal rights a priority. “The jury’s verdict today should serve as a clear message to the agricultural industry that the law will not tolerate subjecting female farm workers to sexual harassment and that there are severe consequences when a sex-based hostile work environment is permitted to exist,” Robert E. Weisberg, regional attorney for EEOC’s Miami District Office, said at the time.

The plaintiffs knew they would not receive money from the verdict because the company was defunct, according to an article for The Florida Bar Foundation, but they wanted their voices heard in court. “Although at the time we were scared, now we can do something so that they can’t continue doing the same thing to other women,” Maria del Carmen Aguilar told the foundation. She returned from Mexico to testify in federal court. “We are not going to stay quiet. It was very important to me to be in front of a judge and for people to see that we were present.”

‘You see people who will use money and power.’

Beyond agriculture, there are aspects to Southwest Florida’s economy that can make workers vulnerable to sexual harassment. Gunter has seen wealthy perpetrators purposely choose victims whose economic situations are more tenuous.

“You see people who will use money and power,” he says.

The restaurant and service industry can be another environment that fosters sexual harassment. Those industries often employ younger people, who might not know their rights or might be less confident about fighting for them.

“A lot of the servers are female. A lot of them might be single moms. They need their jobs,” Gunter says. “Sometimes you might have 20 servers between 19 and 21 years old who are particularly vulnerable to other individuals in that restaurant. … It could be anything goes.”

He’s noticed that sexual harassment can happen when smaller companies grow rapidly and lose their grip on workplace culture and policies.

“They’re focusing on growth and revenue, and meanwhile this fantastic sales representative, who you don’t want to lose, is sexually harassing or trying to have sex with another sales rep and you don’t really take the time to find out who is going to manage these things and you kind of get caught.”

Will more cases go to trial?

Rothman and Gunter noted an uptick in potential clients reaching out since high-profile sexual harassment and misconduct allegations have come to light.

“The increased awareness is a very good thing and a very healthy thing, but really it is going to be interesting if the courts start becoming more receptive to this awareness,” Rothman says, noting that judges often dismiss such claims without allowing them to go to trial. “There is a lot of skepticism in the court system generally about discrimination-variety claims. … There are a lot of hurdles employees will face.”

One of them is timing.

Some inquiries the lawyers have received described sexual harassment beyond the reporting deadline set by the EEOC. The agency dictates a charge must be filed within 180 days of the alleged discrimination. That may be extended to 300 days if the charge is covered by state or local anti-discrimination law.

People must first file with the EEOC before suing for discrimination-based complaints, the legal umbrella under which sexual harassment falls. The commission will investigate the charge and offer a notice of the right to sue, which gives permission to file a lawsuit in federal or state court. The principal gap Gunter sees in the law is that a victim can’t sue the employer unless the company has at least 15 employees. “If you have under 15 employees, it’s game over for sexual harassment.”

However, if battery is involved the individual can be held liable, he notes.

To meet the legal definition, sexual harassment must be “severe” or “pervasive.”

“What the common public thinks constitutes sexual harassment is not always the case when it comes down to the legal case,” Gunter says. “If you ask somebody out, that’s not sexual harassment.”

“I think everyone would agree that an offhand comment from a coworker, while unfortunate, would not bring a cause of action,” notes Rothman, who advises employees to follow the reporting procedures of their employers. “Something we often hear is, ‘I was too scared to say anything to anyone,’ and that can create a difficult situation for the employee, especially when the employer has a policy.”

It’s illegal for an employer to terminate someone for reporting sexual harassment.

“For the most part, victims should, if they feel that it’s sexual harassment and it’s unacceptable, they should bring it to the employer’s attention, following to the ‘T’ the rules of the handbook,” Gunter says. “And do it in writing so that there is some trail.”

Both lawyers suggested reaching out to employment lawyers for a free consultation because of the complexity of requirements and to see if they may have a legal case. “Then you can say what’s going on or maybe you’re overthinking it or no way that’s not acceptable,” Gunter says. “If they delay, there could be problems. If they don’t report it the right way, there could be problems.”

However, employment lawyers might be able to build a case outside of sexual harassment law. “If it’s outrageous,” Gunter says, “there are things that a smart attorney can do to hold that person accountable.”

In the months since women began sharing their stories, signaling “me too” and proving the pervasiveness of the problem, it’s natural to wonder: What’s next?

Powerful women have lent their money and voices to help victims.

In Southwest Florida, that could come in the form of a greater sense of corporate responsibility and a commitment to diversity, Mesa-Estrada says. She also suggests supporting farmworker advocacy groups and programs that empower women, girls and children of farmworkers.

Leaders in the national movement have argued that women shouldn’t have to rehash their moments of vulnerability for public consumption to keep the conversation going. Actress Laura Dern nodded to this viewpoint in an interview with The New York Times. “They don’t need to be on the red carpet at an awards event talking about their personal assault or harassment,” she said in the article. “Let’s talk about women.”

Imagine what they could accomplish in discrimination-free workplaces. And that’s a conversation for anywhere, from Hollywood to Southwest Florida.