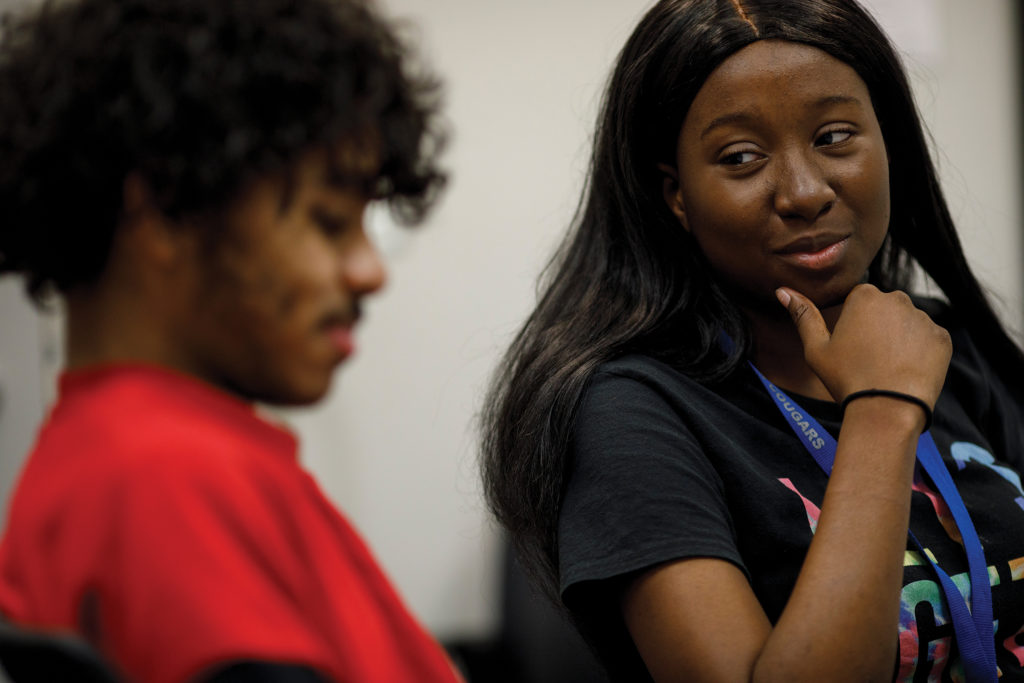 Jaray Rivas knows what it’s like to change schools. Every year, sometimes more than once in a year, his family has moved.

He’s generally mastered the art of fitting in, but when he arrived at Barron Collier High School as a sophomore from Philadelphia, things didn’t click. Part of it was his arrival three weeks into the school year. Part of it was a more rigorous schedule. And part of it was the kids. They just weren’t like the teens in the more urban environments he was used to. “Literally, there was no one I would talk to,” Jaray remembers.

School psychologist Janice Moore had an eye on him, but she hadn’t succeeded in getting through.

Sophomore Brianna Alcee had noticed him, too—the kid in the back of the class, head down, silent. Brianna knew what it was like to change schools, and she was part of the fledgling We Dine Together club, which encourages students to reach out to others who appear lonely.

They remember the first time they talked. Brianna started with a “hi,” and Jaray mumbled a greeting in return. Not good enough, she decided, and she stepped up her efforts.

“A minute or two later she goes, ‘So where are you from?’” Jaray remembers. “I told her, ‘Philly.’ I forget what else happened but then, like a month later, I sat at her table.”

“Yeah,” Brianna picks up. “I invited him to eat with us. … I thought, ‘Hey, I think I made a friend. But I didn’t know for sure. He didn’t really talk. That first day he was quiet—like nothing came out of him!”

The longer Jaray had gone without interacting, the more he had withdrawn from both classmates and teachers.

“When I first got here, I completely hated it,” he says. “I didn’t want to do the work. I think I was failing four classes and the rest were C’s and D’s. Now, some are B’s.”

He smiles a lot during this conversation, jokes with Brianna, appears at ease with the adults. None of this would have happened before meeting Brianna and her friends, he says. “Before, I wouldn’t have talked to any of you like this. Not to be mean or anything, I just wouldn’t. I’d be quiet and answer the question as quick as I can.”

He sees himself as still more reserved than he was at previous schools, but Brianna sees a big difference—especially over text messages, where the two will joke around after school. “Oh, he’s loud!” she says.

Of all the things schools are doing to enhance safety, Brianna pauses to consider what she thinks makes the biggest difference.

“Just checking in on somebody,” she concludes. “Making sure they’re OK. If they need someone to talk to, maybe not forcing a conversation but leading them into it a little bit, making it a comfortable atmosphere for them to open up.”

It had started as an emergency response.

Donations had poured into Fort Myers High School following Hurricane Irma, and parents and teens gathered at school to sort and distribute them. Darby Campbell, then a sophomore, kept thinking about a comment her mom had made about how nice it’d be to have a permanent place to store such things for longer-term recovery.

And that was the seed from which her idea for a new service club, GIFTS—Greenies in it for the Students—and its clothing boutique sprung. (Fort Myers’ mascot is the “Green Wave.”)

By the time Darby won all of the required administrative approvals, Irma’s immediacy had passed. But that didn’t matter. Responding to a crisis had made Darby and her friends far more attuned to the day-to-day plights their fellow students faced.

A donor paid to retrofit a storage room into a miniature “shop” in which Darby and her fellow club members (her roster is up to about 45) keep stocked with free donated clothing, shoes, handbags, toiletries and the like. They appeal to fellow students to cull their closets for unused items, hold fundraisers and partner with Plato’s Closet, a resale shop, for additional donations. For privacy reasons, administrators or guidance specialists accompany students in need to the boutique. Keeping up with demand, Darby says, is a tremendous undertaking.

“It’s definitely made people more aware of everyone’s situation,” says Avery Hering, a junior and one of GIFTS’ core members.

And this is why in a conversation about school safety, Assistant Principal Jamie Kirschner brings up the boutique. Kindness, she says, is becoming “cool.”

“It’s just building a culture of having empathy for one another,” she says.

Darby, Avery and junior Leah Ramsey, the treasurer, all agree. Even at club meetings, Darby takes pains to get the members to intermingle so that they learn to get along with people besides the friends with whom they joined.

“You see people’s soft side,” Leah notes. “I’ve seen guys who you would never think (would contribute) but you see them bringing clothes in to donate.”

“I think when students realize how much of our school is in need, I think it makes them a little more empathetic and considerate of the people in their classes,” Darby says. “I think I’ve become more considerate.”

The girls and Kirschner are fielding calls from multiple other schools that want to start their own programs. And they’re now branching out into other endeavors, looking into issues such as teen sex trafficking to learn how they can make a difference beyond their campus.