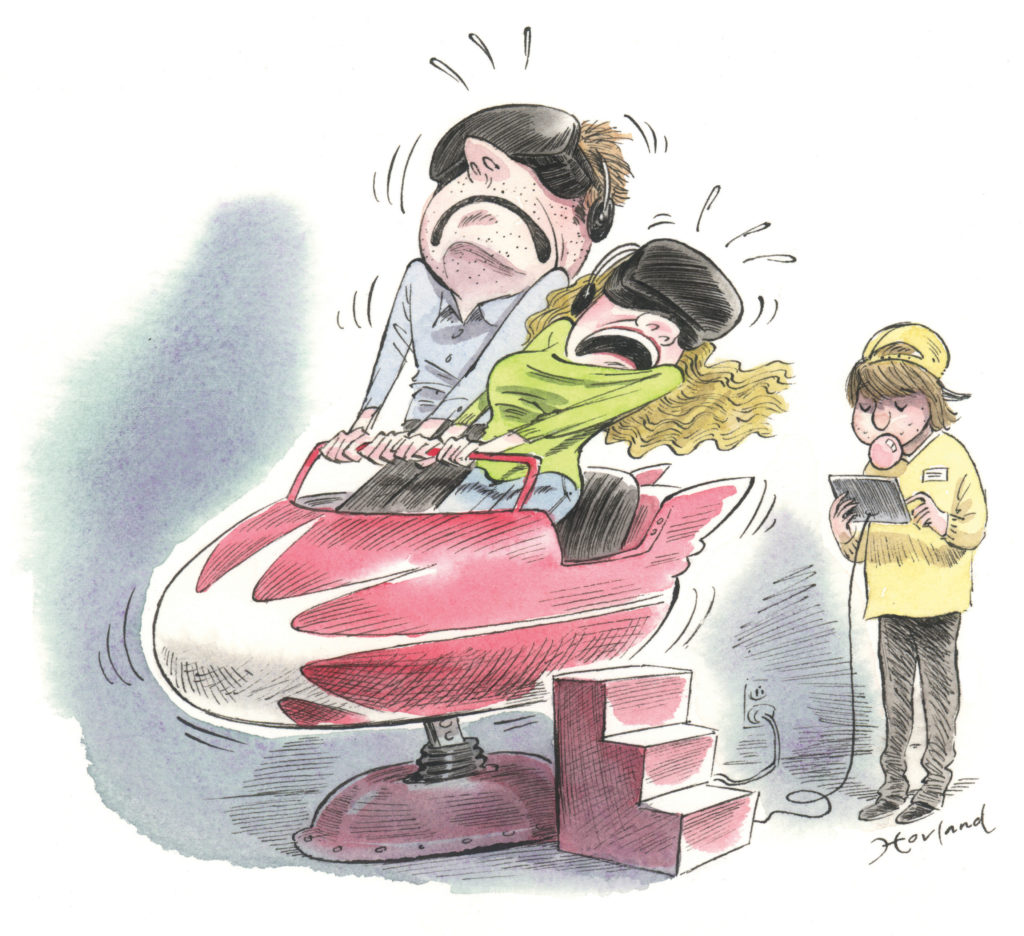 When I was a kid we had balls and dolls and jump ropes and that’s about as adventurous as playtime ever got. These days, play has become a technological adventure of epic proportions, and it’s morphed into massive entertainment centers where kids can play laser tag, experience virtual reality roller coasters, destroy 3-D aliens and ride ultra-fast motorcycles through the streets of Dubai.

The most adventurous video game we had when I was little was Pong. If you’re reading this and you remember Pong, then I know how old you are and you know how old I am, and we’ll all just keep that to ourselves, shall we?

Pong was released as a home game in the mid-1970s and hooked up to your TV. In the very small Ohio town I grew up in, only one of the richest families in town could afford Pong—and they also had a finished basement, with a pool table (I told you they were rich!). All of us neighborhood kids would pile into the fancy basement at the Collins’ house and impatiently wait our turn to play this amazingly fascinating game that involved two primitive paddles lobbing a dot back and forth on a black background for hours. We couldn’t believe that scientists had come up with this wizardry!

Later, of course, when I was in middle school—otherwise known as the Golden Age of video games—along came arcades with games like Space Invaders, Asteroids and Pac-Man.

Alas, I wasn’t much of an arcade kid. Arcades were loud and crowded and usually filled with dumb boys who cared about only, well, video games.

I realize that gaming has come a long way, but I’ve not experienced any of the new games with all their bells and whistles and flashing lights—it’s still too much stimuli for my delicate disposition.

That said, I do enjoy HeadPinz Entertainment Center in south Fort Myers near the airport. The still relatively new complex is lots of fun—there’s a bar, really good food, and I’ve had fun watching friends bowl there. Sadly, my bowling skills are right up there with my brain surgery skills, so it’s much more of a spectator sport for me. Of course, I’ve walked past the arcade area of HeadPinz and seen all the young people in there having the time of their lives among all the color and lights, but I’m not brave enough to venture in.

So, in order to let the kid in me come out and play, the folks at HeadPinz invited me to come in one morning before they opened so that I could have the digs to myself. I invited my dear friend Marc Collins (no relation to the Pong-owning family back in Ohio), who is always up for a fun adventure, to join me.

We decided to jump right in to laser tag.

Imagine a snow-capped range of alps, and there’s an abominable yeti involved, and lots of snow is shaking off of cliffs, and you have to use your trusty phaser to defend yourself. I’m breathless just remembering it.

Marc and I were suited up in vests with all sorts of blinking lights and buzzing buzzers on them and were handed our laser phaser weapons. We were given 30 seconds to hide in a huge two-story mountain range, and then it was game on. We snuck around big wooden mountains sets in the dark to hide from each other, and then dodged obstacles as we ran through the course trying to find each other. Our phasers made a “Pew! Pew! Pew!” sound as we fired lasers at each other—all the while screeching and yelling, “I got you!” or “No! Don’t shoot!” amid way too much laughter. When it was over, we were all at once hysterical with laughter and exhausted from the workout. I mean, we were sweating. I definitely recommend laser tag over the gym any day—trust me, it’s a lot more fun.

My inner kid couldn’t wait for the next adventure as Marc and I climbed onto a virtual reality roller coaster. Keep in mind, Marc and I share a healthy fear of roller coasters; we thought, perhaps, because this one wasn’t real, we wouldn’t be terrified. The seats move and rumble a bit, but you’re safe on the ground the whole time. Handlebars are provided for effect, and you don enormous heavy goggles right out of a science-fiction movie. I was feeling very courageous. That is, until the roller coaster got moving and suddenly we were soaring up and down the track with all its twists and turns at around a million miles an hour (cold air blows toward you to heighten the experience). We screamed when our virtual cart went off the virtual rails and we were sent flying into the virtual night sky—we grabbed each other’s arms for safety, and I imagine that the manager watching us was laughing hysterically. If you fear roller coasters, the virtual reality coaster at HeadPinz is for you—you get to experience all the thrills and chills without the actual threat of dying.

Next, we found ourselves in the world of Halo, an action-packed combat game set in the 26th century where our main job was to destroy lots and lots of really ugly, scary, mean aliens. Let me tell you, for two pacifists, we really got into making mincemeat out of those beastly 3-D creatures.

We were both out of breath but having a blast when we decided to go into the Jukin’ Box room for some dancing. We stepped into the small room, where the floor was nothing but lighted tiles that randomly change colors. The idea is to avoid the red ones and to avoid the lasers coming out of the walls. It’s harder than it looks, believe me. You choose the style of music you want to dance to—we decided on country—and then we started our jig. It was fun and we burned even more calories, but we stepped on way too many red squares. Jukin’ Box may have required more foot-eye coordination than we were able to muster.

Finally, it was time to get onto our turbo-charged futuristic motorcycles and ride through the harrowing streets of Dubai, where I crashed into everything. Cars, bridges, little old ladies and more. But I also managed some spectacular jumps and barrel rolls. Evel Knievel would have been proud.

When our morning of gaming adventures was over, we seriously felt like 12-year-olds. Had it not been for our middle-aged hearts racing, we could have played all day. Instead, we meandered over to the bar at HeadPinz, where we celebrated with margaritas—and that’s one thing you can’t do when you’re 12.