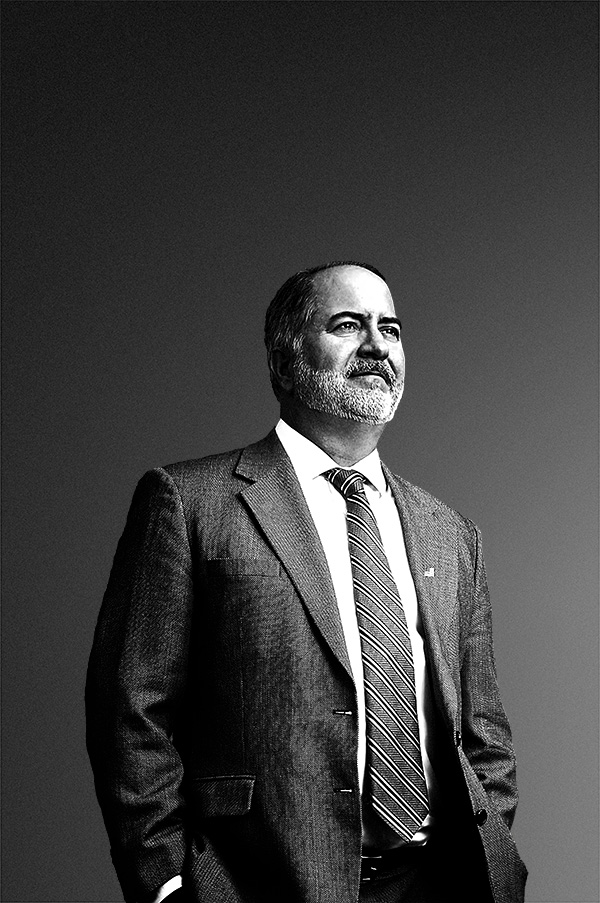 The judge looks serious in the picture, wearing his robes and staring out of the frame.

His picture is there because without him, it’s not likely Solis would have ended up here, in Collier County, when his fledgling law career could have taken him to any major city in the state more than 25 years ago.

“He told me that Naples was essentially kind of a new place and it was growing. It wasn’t this old town with a legal establishment that had been around for years,” Solis says. “He said, ‘Go to Naples where you can get involved and be part of creating the legal community there.’”

So he did. That was in 1993. Fresh off a two-year clerkship under Overton following completion of law school from Florida State University, Solis, then just 30 years old, drove out of the state capitol, past Orlando where Orange County’s population was flirting with three quarters of a million, and through Tampa where the first courthouse was a log cabin that burned down during the Second Seminole Indian Wars. He stopped along Interstate 75 before it would have led him to Miami (where courthouse parking headaches rival only that of their nightclubs), opting instead for the fringe of the Everglades where the lawyers in town had been trying cases at the East Naples courthouse only since 1962, when the county seat had moved from the “old courthouse” erected in Everglades City in 1926.

“I’ve been practicing law here ever since,” Solis says.

He took a position at a firm called Young, van Assenderp and Varnadoe, and later became a founding partner at Siket, Solis and Maher, whose name took on an alphabet soup of iterations. He partnered with Rep. Kathleen Passidomo for a time and eventually got recruited to Cohen and Grigsby, where he’s been since 2006, specializing in legal services for businesses.

He got married at some point in the mix. The pair later divorced. Their two children are off at college now, and, come to think of it, neither mailed in an absentee ballot to cast a vote for Dad.

Luckily, Solis was able to muster enough support for re-election this past year and the first year he ran for the District 2 seat on Collier County Commission, having become a true member of the community, serving on a dozen boards and committees since deciding to call Napes home.

Tennis and the American Dream

A native Floridian, Solis is the youngest of three children and the only born in the U.S. His parents emigrated from Cuba in the 1960s when his father, a civil engineer, became a professor at the School of Architecture at the University of Florida. His mother, a successful architect in her own right, designed Cuba’s statehouse building that housed the supreme, trial and appellate courts all at once until it became the headquarters for the Communist party.

“It was the nicest building,” Solis shrugs.

His older brother would go on to become a surgeon. And his sister works at the Harn Museum of Art in Gainesville.

Both of Solis’ parents have died, but up until her recent passing his mother liked to come to all the Coffee with a Commissioner events Solis hosts in District 2, where she sat at the back.

“She (told) everyone I’m her son on their way out,” Solis says.

Born in Lakeland, Solis was raised in Gainesville.

Alabama State stole him out from under his hometown college on a tennis scholarship.

Not only did he go pro, but he also was a two-time All-
American at Alabama and twice played in the NCAA Championships single draw. He traveled the world playing and was inducted into Alabama’s Tennis Hall of Fame in 1998, but his shoulder wore out over time.

“I always knew I was going to go to grad school,” he says.

Solis attended Florida State University College of Law, graduating in 1991. Then he “hit the law school lotto” with a two-year clerkship in the Florida Supreme Court right out of college. That’s where Overton changed his life with a bit of parting advice.

Since coming to Collier County, Solis has served on everything from the board of directors for Avow Hospice to the Council of Hispanic Business Professionals, and even taught meditation at Bala Vinyasa Yoga.

But he ran for county commission in 2016 on a bit of a whim, and at the last minute.

“I qualified the last day of qualifying an hour before the cutoff,” he says.

He threw his name in the hat after his predecessor, Georgia Hiller, left to run for the clerk position.

“I had a lot of support from people who really mattered, and I was fortunate people knew me from practicing law,” he says.

While public service is obviously close to his heart, politics weren’t necessarily on his radar. The position, he says, is simply a tool to serve.

“It’s a lot of work, but it’s meaningful in the sense that you can fundamentally help people,” Solis says.

Mental Health and Affordable Housing and Bears, Oh My!

Solis spent a year meeting with local stakeholders who had a hand in mental health efforts trying to get a handle on the situation. He says it took six months for him to appreciate the scope and complexity of the issue.

“It affects everything from transportation to housing to hospitals and the school district,” he says.

Solis pushed for the recent 1 cent sales tax increase in part because of the funding it would provide for a new receiving facility. The David Lawrence Center currently has only 30 beds.

The facility won’t be finished for a few years and can’t break ground until initial proceeds from the tax begin trickling in later this year.

But Solis isn’t just meeting with bigwigs and throwing money at a problem.

This year, in lieu of Christmas gifts, he and his significant other, Jan Ice, opted instead to bring lunch to NAMI (National Alliance on Mental Illness) of Collier County residents each week for the next year.

This past week, they handed out dozens of sandwiches, cookies and bags of chips. They even brought Ziploc bags so the folks who visited the Sarah Ann Center for lunch on Friday could bring a meal home for the weekend. Then he and Ice sat down with the visitors to talk and eat together.

“I know the members were impressed that he even thought of them,” says Pamela Baker, CEO of NAMI of Collier County. “They often feel forgotten by society.”

Putting a face to the crisis helps Solis to keep the problem at the forefront and understand it all better.

He did the same recently when he cobbled together a group of 10 young professionals whose brains he picked on the issue of affordable housing for the Collier workforce.

“We have a senior advisory board, so I was trying to get a group together who would come to the county meetings,” he says.

“For me to be talking about young people and housing, it’s kind of an abstract thing,” he continues. “But when young people showed up, it changed the conversation considerably.”

In the meantime, there are bears running around North Naples, tipping trash cans for their nightly buffets and scaring residents.

“I get emails from folks in Tarpon Cove all the time,” he says. “Pelican Marsh, Wilshire Lakes.”

Waste Management is piloting a program that would upgrade trash and recycling cans to a new bear-proof variety.

There’s a ton going on in D2 right now. A major project is in the works to replace sewer and water lines along 25 miles of roadway in Naples Park. Commissioners are meeting about the use of fertilizers, as they affect water quality, as well. And all the while, Solis is thinking about how the county can diversify its economy to shift from a dependency on tourism. He points to the new culinary accelerator in Immokalee, which has already produced four businesses.

“It has the potential to change not only the economy in Immokalee, but in the county,” Solis says.

Solis’ boss, Chuck Cohen, speaks of him with the same reverence Solis radiates when asked about Justice Overton.

Cohen recruited Solis to his firm in 2006, having learned of his reputation among colleagues. Within minutes of meeting, he learned Solis had a great personality, too.

It takes a patient mind, Cohen says, to appreciate the scope of a problem such as mental health.

“He is the kind of person who very naturally can look at a complicated situation … and evaluate it from all angles,” Cohen says. “He has done that pretty consistently as a lawyer, and that’s what he is bringing to public service.”

Solis remembers the same open-mindedness and patience from Overton, who once calmed an enraged man who visited the courthouse demanding to see him by sitting down with him for more than an hour. By the end, the two had parted ways with a handshake and a hug.

“And he said, ‘You know, people just want to know someone is listening to them,’” Solis says.

He sips a tiny cup of Cuban coffee recalling the memory and smiles at the portrait above his desk.

Solis credits the changes he’s been able to effect here in large part to the judge, who urged him to do what fellow lawyers weren’t doing 26 years ago and to choose Collier County.