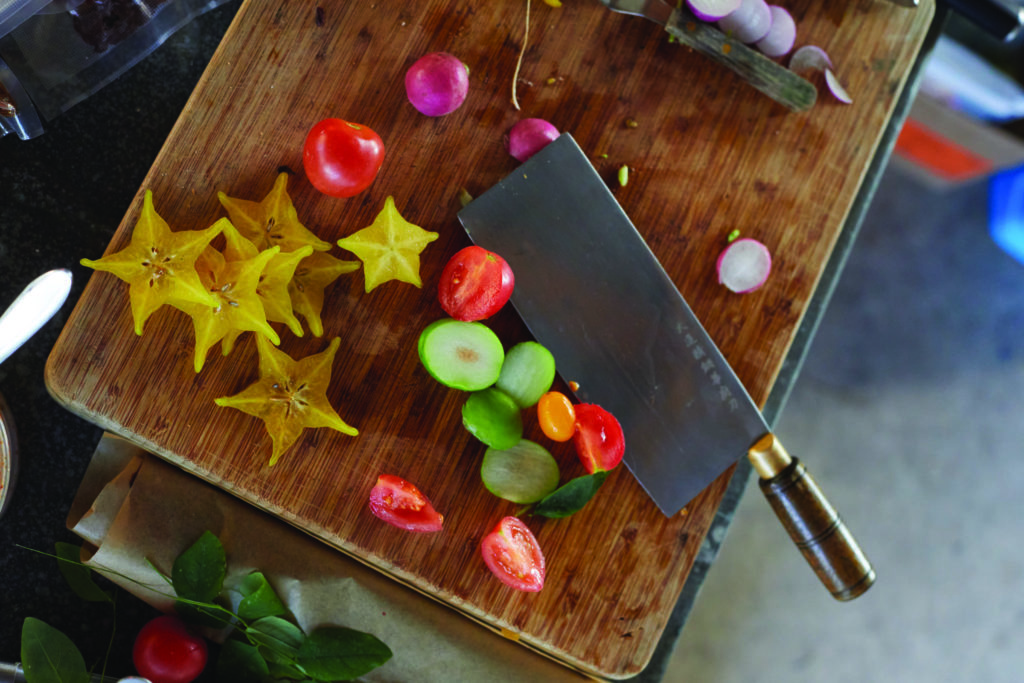 David Robbins spent the latter part of his morning at East Fork Creek, an aquaponic farm in Fort Myers, where he introduced the farmers to the owners of a new restaurant he’s consulting for. We meet at Downtown Coffee and Wine Company in Bonita Springs, just a short drive from the commissary kitchen where he’s gearing up to expand his vegan Not a Burger into an entire line of plant-based foods.

As he sips his drink, Robbins talks about his upbringing in Kauai, Hawaii, where his family farmed organic vegetables, fruits and flowers for leis and had a coffee shop. In their downtime, he and his siblings ran wild outdoors. “Where we lived was like Raiders of the Lost Ark,” he recalls. “Literally, they filmed there. By the time we could walk, we were running around the valley, in the woods and the river.” And though his family wasn’t vegan (Robbins is an omnivore), Hawaii is where he first learned to appreciate plant-based living. “The school we went to was Seventh-Day Adventist. About half were vegetarian, and about half of those were vegan. I was around that a lot growing up, around people who did it properly and in a healthy way,” he says, pointing out that vegan diets can include lots of heavily processed and unhealthy foods.

When Robbins was a teenager, his family relocated to Port Charlotte, and he eventually enrolled in Florida Gulf Coast University, majoring in cultural ecology. “I had this vision where I wanted to work internationally with NGOs, helping developing communities create sustainable food systems,” he says. To help pay for college, he got a job at a local restaurant, peeling shrimp for $9 an hour. Within a year, he’d worked every station and started managing the kitchen in the evenings. After graduating, he spent seven years at Fiddler’s Creek Club & Spa before landing a prestigious internship at Hudson Valley’s Blue Hill at Stone Barns (one of The World’s 50 Best Restaurants) in 2014. The restaurant’s vision—a model for the future of sustainable, farm-driven cuisine—aligned with Robbins’ own. “It was reaffirming for me to see someone like [Blue Hill chef and founder] Dan Barber, who’s a leader in the global food scene,” he says. “How I was seeing the future of the food world, how I was trying to cultivate myself, the decisions I was making weren’t so far off, philosophically, from what he’s doing.”

Upon returning to Southwest Florida to be close to family, Robbins brought that ethos to Harvest & Wisdom at Shangri-La Springs as chef de cuisine. The Bonita Springs property’s 4-acre farm provided a rare opportunity for the culinary team to follow the entire life cycle of ingredients, pulling fresh produce directly from the earth for the evening’s menus. It also gave Robbins plenty of excuses to play with vegetables. In addition to including vegetable-forward dishes, like beet tartare with mango gel and a tasting of various tomato textures, Robbins revamped the plant-based patty he’d been developing throughout his career, dubbing it the ‘Not a Burger’ for the first time.

Robbins has always empathized with vegetarian diners. “Many chefs will serve roasted vegetables with a squirt of balsamic or pasta with vegetables. Where are their proteins? They’re not getting anywhere near the same level of food you’re putting out for the rest of your customers,” he says.

The burger’s name nods to the idea that it’s not trying to imitate meat. Instead, Robbins created a distinctly vegetable product with a versatile profile. Beets are the backbone of the recipe, giving the patties a vibrant red hue. Quinoa and whole-grain oats add bulk and contribute to the texture, which Robbins toyed with for a year, adjusting ratios and preparations, so the burgers hold together and have a springy bite. Lentils boost the protein and fiber content; slow-roasted onions, deglazed multiple times, build layers of flavor; garlic-infused, extra-virgin olive oil is the only added fat in the recipe; and umami-boosting gochujang and tamari add a savory aspect.

While mass-market brands like Impossible are vegan, the proprietary protein is heavily processed, made with genetically engineered ingredients (to create the illusion that its burgers ‘bleed’ like beef) and high in saturated fat. “We’re on the opposite side of the spectrum,” Robbins says. “Our goal is to be a superfood. It’s all about nutritional density. It’s locally sourced, good for the environment, good for your health and still tastes good.”

Robbins began selling the patties at the Third Street South Farmer’s Market in January 2021. This spring, he plans to expand under the umbrella of Future Foods. As part of the expansion, his online marketplace will feature a handful of new products, including meatballs made from his Not a Burger base with an optional tamari-gochujang glaze and garlic-herb cashew spread. (A superfood chicken nugget made with quinoa, chickpeas and whole-grain oats is also in the works.) He aims to grow the brand into a regional or national entity. “Once we get established, the idea is to find other similar startups that are offering food with the same philosophy, bring them on to partner and help them grow,” he says. “Not necessarily vegan, but sustainable, clean ingredients from regenerative farms.”

Robbins still hopes to take his passion for sustainable dining abroad, perhaps through work with an NGO. Locally, he volunteers at ECHO Global Farm in Fort Myers, a nonprofit that teaches small-scale, sustainable farming to food-insecure communities worldwide. “ECHO is the place I’m most passionate about,” he says. “I haven’t been able to get to a place in my life yet where I have the freedom to do that type of work myself overseas.”

Until then, he’s content to educate his customers on the importance of a sustainable food system. “I want to show that we’re doing things ethically. The idea is to move toward a system that is sourcing clean ingredients,” he says. “We’ve found people who understand and appreciate us, and they’ve become amazingly loyal customers.”