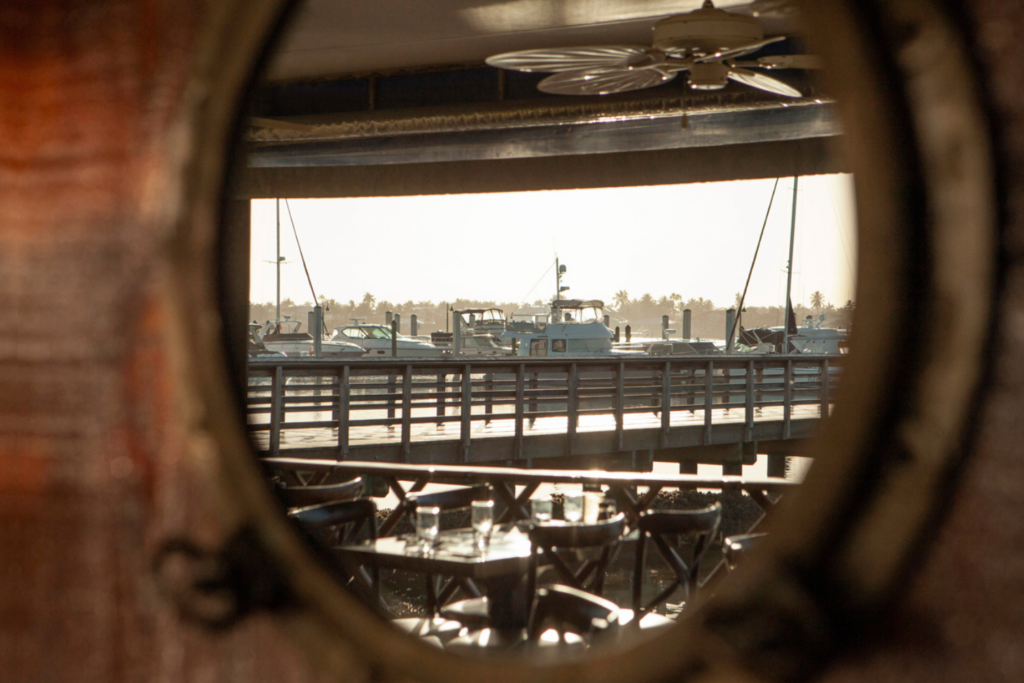 The Dock at Crayton Cove (Courtesy of Pushing the Envelope PR)

When making an entrance, it’s possible to make a big splash without getting wet. Stepping off a yacht into a restaurant guarantees a few head turns. And while it may require a bit of planning to get the right mile markers and reserve a slip, it’s worth it for a meal you and your friends will talk about long after your last toast.

Marco Island and its endless maze of canals beckon all kinds of boaters. While most folks know of casual crowd-pleasers, like Mango’s Dockside Bistro at the Esplanade marina, the relatively new Osteria Capri, just a bit north, on Naples’ southern edge, is an unexpected treat. Overlooking a vast stretch of azure with a mangrove-covered island in the distance, the restaurant has two slips and a beach where skiffs and small pontoons can drop anchor for lunch. Le Cordon Bleu Paris-trained, Sicilian chef-owner AJ Black, who has run restaurants in Southwest Florida for decades, opened this Sorrento-inspired spot on Naples’ Isles of Capri in 2020. “I’ve had places all over—Amore in Naples, Il Tesoro on Sanibel—there’s nothing left of nature. This feels like what Naples used to look like, and I hope it stays that way,” says Black, who takes pride in using the finest ingredients, including fish brought in by boat daily. Dive into delicacies like the frutti di mare Neapolitan pizza and the seared sea bass finished with a medley of mushrooms, artichokes and sundried tomatoes, served over lemony risotto.

In Old Naples, the nearly 50-year-old The Dock at Crayton Cove remains a reliable standby for brewskis and burgers (the double with caramelized onions and house sauce is worth the calories). The wooden structure conveniently sits over the water’s edge at the City Dock, making it easy to tank up before continuing on to one of the restaurant’s four, first-come, first-serve slips, just a five-minute walk away. Across Naples Bay, open-air Celebration Park is a major draw for boaters with its permanent roster of gourmet food trucks parked along the central axis and 40-seat rectangular bar and tables, fronted by about a dozen first-come, first-serve posts to tether boats. The action goes from lunch until almost midnight daily, making it easy to squeeze in a Korean fried chicken sandwich from the Great Foodini, decadent lobster fries at Island Seafood or loaded samosas from recent addition Deccani Bites, owned by chef Asif Syed of the acclaimed 21 Spices just down the road. “I wanted to do the street food of India,” Syed says, adding that the roti, an Indian flatbread, has been a big hit. “It’s like a flat croissant—nice and crispy.” The roti, along with the naan, grilled meats and most of the other fragrant creations, are made fresh every day, much of it coming from the kitchen at 21 Spices.

North of downtown Naples, the gold standard for waterfront fine dining is the tony The Village Shops on Venetian Bay, including M Waterfront Grille for modern twists on surf-and-turf and Bayside Seafood Grill & Bar, one of restaurateur Tony Ridgway’s enduring gems. But many people don’t realize they can pull up to one of the two public slips at the onsite Park Shore Marina or rent a Sundancer to cruise around after a meal.

If you prefer to unwind off the grid, continue further north, just past Bonita Springs. Once there, don’t miss Flipper’s on the Bay. Though it’s on an island in Lovers Key State Park, it’s technically located in Fort Myers Beach and it feels light years away from the touristy, tiki-themed developments. The open-air restaurant prides itself on its boat-friendliness, listing its exact latitude and longitude on the website. While you can expect Florida seafood standards like crab cakes, there are also unexpected plates, such as jumbo scallops on celery root puree with blood orange and pickled ginger reduction. In the Fort Myers River District, Luminary Hotel & Co.’s new Oxbow Bar & Grill is next to the Fort Myers Yacht Basin, where you can hail the marina on VHF channel 16 to check if any of the more than 200 slips are open. Hunker down at the restaurant, which overlooks the Caloosahatchee River, for Blue Point oysters and beer-battered fried fish, or walk across the street for fine dining at the hotel’s Silver King Ocean Brasserie.

In Cape Coral, the boating capital of Lee County, you can’t go wrong with a waterfront meal at Gather in the Tarpon Point Marina. Two of the area’s top chefs, Fabrice Deletrain and Benjamin Voisin, draw inspiration from the farthest reaches of the globe for their exuberant, hearty dishes, like Catalan grilled octopus with Romanesco and sous vide pork chop with maple-mustard jus. Call in advance to park in one of the reserved slips for gorgeous sunsets over the mangrove-lined bay.

Cruise further north, and you’ll rediscover Old Florida’s charm as you pull up to one of the 10 spots to dock around ‘The Pink,’ what regulars affectionately call The Pink Elephant, a two-story boaters’ paradise in Boca Grande. The restaurant is owned by Gasparilla Inn & Club, the famed winter retreat for Northern titans, including the Bush family, who visits regularly. Book a spot on the upper floor (the ground level is walk-in-only with tables around a huge bar) for the house-favorite tempura grouper with tangy Thai dressing and a refreshing Pretty in Pink cocktail of Ketel One and pomegranate liqueur with a splash of pink lemonade and a tiny pink elephant balanced on the rim. “People come in and ask for them all the time—they collect them,” executive chef Robert Plesh says. “They use them in works of art and to make Christmas ornaments.”

In a region where the number of waterways rivals asphalt-paved highways, the call of the water is undeniable. Make it a priority to boat up to your next meal this summer. You won’t regret it.