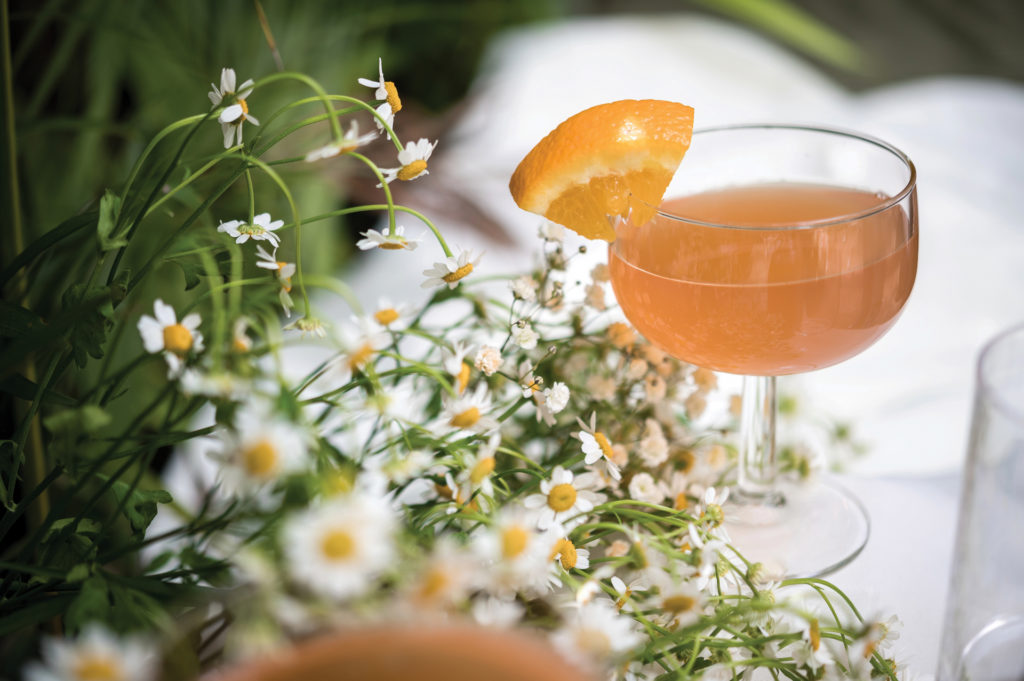 The couple brews the teas fresh weekly and deliver to your door, milkman-style, in 32-ounce jugs. (Photo by Anna Nguyen)

When the first kratom tea bars started popping up in the region about five years ago, Fort Myers couple Bryce Ivie and Claudya Aleman were working toward a healthier lifestyle and moving away from drinking alcohol. “A lot of people have been getting on the kratom train as a coffee and alcohol alternative,” Ivie says.

Kratom, a Southeast Asian plant in the coffee family, is used for its leaves, which are often crushed into a powder and brewed like tea. More than 50 different strains offer effects that are believed to be as powerful as strong sedatives, painkillers and mood-boosters. “It’s like a tea leaf—the longer it matures on the tree, its properties change,” Ivie says. “White kratom is a great morning coffee alternative, since it provides energy and focus; green is more middle-of-the-road and helps with anxiety; red is good at night since it relaxes the body and helps you sleep and stay asleep.”

The main criticism, however, is the flavor. Some say it tastes grassy and bitter, like overly steeped green tea. To mask these notes, the powder is often poured into tea, juice or non-alcoholic cocktails. Ivie and Aleman were sampling different versions but couldn’t come to terms with the taste, so during the pandemic, they started experimenting with their own batches at home. The 31-year-old Ivie had ample experience with creating craft drinks—at the time, he was a roaster at Narrative Coffee Roasters. After 10 months of “drinking a lot of bad batches,” they developed recipes for three varieties: the white Sun in the Cup, the green Zen Again and the red Dream Catcher. “We don’t want to dilute the product with artificial flavors, so we’re minimalist on what we include,” Ivie says.

Instead of the typical green, muddy water look and feel of kratom, Ivie and Aleman created a golden amber shade that is more reminiscent of liquid honey. They also developed a proprietary tea blend to create the signature peach-lemonade flavor. Similar to how cold-brew coffee is made, Good Fellow Botanicals has a 4- to 24-hour brew time and uses high-quality water filtered through a reverse-osmosis system—similar to what’s used at Narrative—to remove contaminants and improve the taste. Batches are small—only about 5 gallons brewed at a time—and made-to-order, with Instagram serving as the main point of contact. Shelf life is about 30 days, and the 32-ounce growlers are delivered each Thursday in an “old-school, milkman style.” You pay $30 the first time, and each week, empty jugs are picked up outside your home and replaced with a fresh bottle for $25. Though it’s still a side project (Ivie works for the Bonita Springs music production studio Sugarshack Sessions, and Aleman works for luxury picnic company Coast & Mingle), the duo is growing their presence. They moved operations at the beginning of this year to a shared commissary kitchen, and they sell at Narrative and through Instagram.

For the couple, kratom provided a gateway toward a healthier and sober lifestyle. Now, with Good Fellow, they hope to inspire and interest others in the community who are curious about following a similar path. The goal is for kratom to be seen as an elevated beverage served at upscale restaurants in the region and consumed by a broad spectrum of people, including those who wouldn’t necessarily walk into a kratom bar. “We want Good Fellow to be radical in a sense—we don’t want to be a machine that pumps out a product,” Ivie says. “We hope that other people catch onto the culture and lifestyle that we’re creating through Good Fellow over time. We’re in it for the long game.”