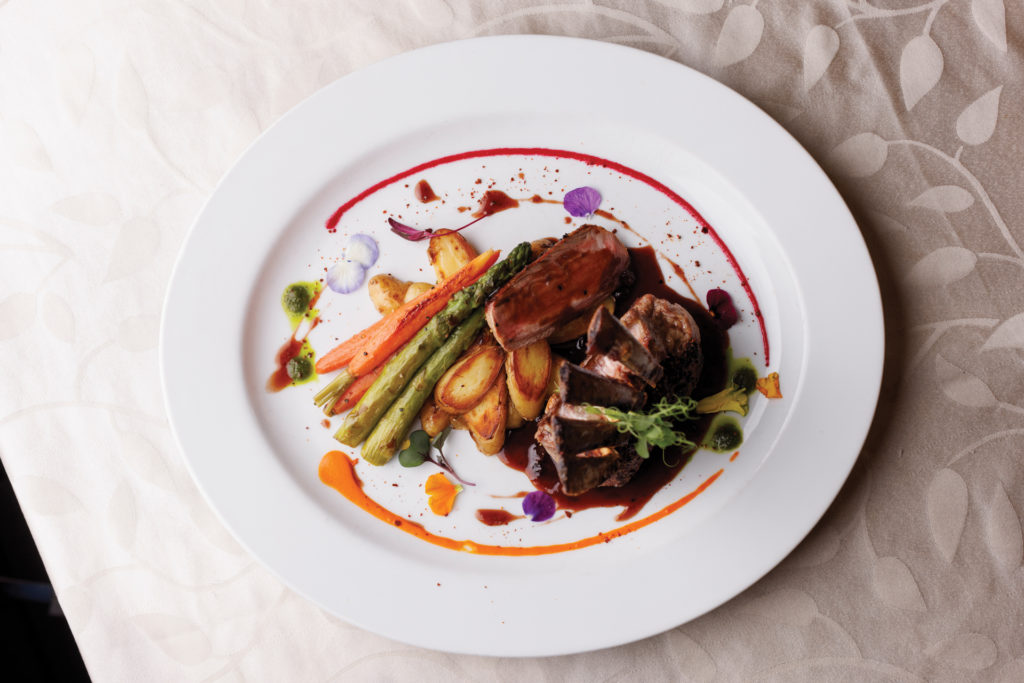 The menu at Côte d’Azur in Naples focuses on Mediterranean ingredients. (Photo by Brian Tietz)

James Waller spent the past 35-plus years working his way up from a sous chef role in California to owning his own restaurant, Côte d’Azur, in Naples. And while he’s cooked in various kitchens—and prepared state banquets for former presidents Richard Nixon, Jimmy Carter, George H. W. Bush and Bill Clinton—he’s always gravitated toward French cooking, particularly the cuisine found in Lyon and Paris.

But at Côte d’Azur, he’s moved beyond the capitals’ classics (Lyon is considered the global gastronomic hub) and focuses on Mediterranean ingredients, which shine brighter with less preparation. “When ingredients are fresh, dishes don’t need to be reinvented or manipulated,” he says. “The cuisine in Southern France has flavors that can be complex on their own—like roasted sole with a sprinkle of sea salt.”

French cuisine is a cornerstone of gastronomy. With its techniques (flambé, sauté), knife skills (julienne, batonnet), and mother sauces (béchamel, hollandaise), France has long provided the foundation for everything from pastry to haute cuisine. Even through the years and trends, it maintains an endless allure that chefs emulate and make their own.

For third-generation baker Yannick Brendel—who runs La Colmar Bakery & Bistro in Naples with his business partner, Dominican-born Ana—baking is a connection to his father. Hailing from Colmar, in France’s Alsace region, Yannick started working in the family bakery at age 14. At his Naples bakery, he works with imported French flour to create slow-fermented baguettes and rustic bread baked in steam ovens by a century-old French producer. “We don’t cut corners. We know the importance of bread made with flour from France,” Ana says. French flour isn’t genetically modified or treated with chemicals.

Yannick also experiments with flavors and techniques from other cultures. Before moving to Naples, he worked at a South Beach bakery. “What people are not aware of is that food culture in the Dominican Republic and France are very similar,” he explains. “Bread is a staple of Dominican culture as much as it is of French.” He and Ana mix elements from both cuisines for pastries, like brioche-style pan dulce and dulce de leche cruffins.

Blending cultures also inspires Argentine-born Clara Fasciglione of Bonita Springs’ Wolfmoon Bakery. Born in Mar Del Plata and raised in Patagonia, she was fascinated by croissants and their resemblance to Argentinian medialunas. Wolfmoon toes the line between tradition (plain butter or almond-filled croissants) and modern interpretations that nod to her South American heritage, like a sweet croissant filled with milk caramel. Last year, Clara spent two weeks in Paris sampling classic croissants from traditional boulangeries and more whimsical, rainbow-colored creations at artist-inspired pâtisserie Félicité in the city’s Montmartre neighborhood. “You can learn so much by trying a product, seeing the taste and texture,” she says, adding that Félicité inspired her double-chocolate croissant.

Southwest Florida is rich in traditional French restaurants, too. In Naples, Escargot 41’s menu promises a variety of bistro favorites, like Burgundy-style escargot in parsley-garlic butter and homemade country pâté, as does the menu at Fort Myers’ Azure, where you’ll find frog legs and steak frites. At homestyle Chez Böet in Old Naples, customers settle into the red banquettes for dishes made with locally grown, organic produce and Florida seafood, including bouillabaisse with pink Gulf shrimp. And the patio at The French Brasserie Rustique has an informal, Parisian terrace-style setting for dining on Alsatian duck leg confit or chilled platters of fruits de mer. “We want to bring the simple bistro style from different parts of France,” says beverage director Marcello Palazzi. “You’ll find influences from Italy or Morocco—but always with a French accent.”

The restaurant’s Sicily-born chef, Vincenzo Betulia, recently brought on chef Benoit Valota, who grew up in southwest France and whose resume includes multiple Michelin-star restaurants. Vincenzo says Benoit knows southwestern French food “like the back of his hand.” He’s been trying to recruit the young chef since before the pandemic.

At Bistro Soleil at The Olde Marco Inn, Lorraine-born chef Denis Meurgue is also known for traditional fare, like roast duck à l’orange, brie en croûte and tarte tatin. But there’s a caveat: “You won’t find heavy sauces in our dishes since Denis has acclimated to the warm climate in Florida,” says his wife, Lisa, the restaurant’s co-owner and manager. The climate is perhaps why lighter dishes from regions like Provence and the Riviera are popular in the area.

At Naples’ Bleu Provence, chef-owner Lysielle Cariot looks to the herbs and flowers found in her native Provence to spruce up the cuisine—but the core of the kitchen’s philosophy comes down to preparation. “All of our sauces are made in-house, which is a huge part of French cooking,” says manager and advanced sommelier Clément Cariot. “Making everything from scratch is something we pride ourselves on.”

And since French wine is another integral part of the culture, the restaurant’s Wine Spectator Grand Award-winning list offers plenty of possibilities for pairings, featuring thousands of picks from around the world (with a major focus on France, of course). “I’ll decant certain red wines tableside because this is part of the dining experience,” Clément says, adding they often select bottles from historic or top-rated wineries, like Domaine de la Romanée-Conti in Burgundy.

For chefs like Lysielle and others, French cuisine is in their DNA. “I never wanted to do something French,” says Christian Vivet, whose seven-year-old Bleu Rendez-Vous French Bistro on Sanibel Island was heavily damaged from Hurricane Ian and is closed until further notice. The Paris-born chef grew up with two grandmothers who were great cooks, and he attended culinary school at 16 in the Jura region of France, the birthplace of Comté cheese. After working in restaurants in Europe and at Epcot’s France Pavilion and spending a year in San Francisco’s Bay Area, he made his way to Fort Myers and opened Blue Windows French Bistro with his wife and business partner, Mari. “As I was writing [the menu], only old French classics—what I learned in school and what my parents and grandparents cooked—were coming to me,” he says. “I couldn’t fight it.”

With his second bistro, Bleu Rendez-Vous, he embraces his native cuisine. Boeuf Bourguignon and coq au vin feel as if they’re straight out of a Julia Child cookbook, incorporating local ingredients, like fresh seafood. “The core is traditional French food,” Christian says. A majority of the wines are also French. “Pouilly-Fuissé is popular, but so is Bordeaux—and you can’t have a French restaurant and not serve Bordeaux.”