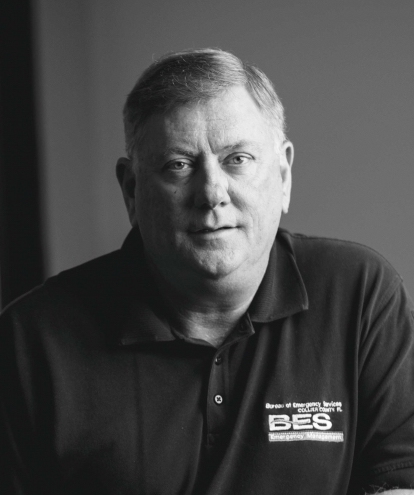 When you’re the director of emergency services—as Dan Summers is here in Collier County—you’re not in the business of smiling a lot. Indeed, as he rallied his team of 120 workers fighting Hurricane Irma last September, he called them all together on 9/11 to pay tribute to those who lost their lives in the Twin Towers in New York, especially the first responders to the disaster. “And we vowed to roll up our sleeves and do our best for the community,” Dan says.

But under all this pressure, I wondered, could Dan recall from his 30-plus years in emergency management some moments on the lighter side that eased the tension? He chuckled and started to reminisce.

“During a big hurricane years ago,” Dan recalls, “I was conducting a live press conference in Wilmington, North Carolina, about the path of the storm and the timing of its arrival. My teenage son, Michael, at the time was working as a pizza delivery boy in nearby Wrightsville Beach, and after work that day he took some pizza to the people at the Weather Channel and they invited him in to watch them reporting on the storm’s progress.

“My son and I have a code on our pagers and right during my press conference, he hit the emergency number. I stepped away from the press conference and said, ‘What’s going on, son?’ ‘Dad,’ he said, ‘Your forecast is wrong.’ The Weather Channel experts saw that the storm was landing far sooner in Wilmington than I had predicted. I went back to the press conference and alerted the public to evacuating much, much sooner. We evacuated 30,000 people, no doubt saving many lives. Later, when the county’s elected officials asked why I had changed my prediction, I told them that a pizza delivery boy had saved all those lives.”

Another time, in Dan’s coastal North Carolina days, there were two incidents involving damaged vehicles in flooding crises six months apart. In the first incident, Dan was driving a big Suburban through floodwaters when it hit a sinkhole and sank. It turns out, he was there based on a false call. No one was hurt or injured, but Dan took a good ribbing about the loss of the vehicle. On another occasion, he was riding a large National Guard truck through floodwaters to inspect a radio communication tower. He got stuck midstream and had to swim through muddy water to get to safety. Again came the ribbing. Back at headquarters, Dan recalls, “They gave me a naval salute and naval cap and suggested maybe I thought I was commanding vessels underwater, not trucks. Those incidents followed me to Naples, where I got some good-natured kidding about them when I applied for the job here.”

During Hurricane Katrina, Dan had the opposite problem of explaining extraordinary efficiency. He had been asked to go to Atlanta to help out, and his job was to get 10 or 15 ambulances from North Carolina to the danger zone in New Orleans and surroundings. By coincidence, he ended up directing a team he had previously worked with in his North Carolina days. They even had a great communication system with Nextel phones that they had always used together. “At first,” Dan says, “I didn’t even tell the people in Atlanta that I and the guys on the team were old pals. But when the official directing the overall effort for Katrina was full of such praise for our very efficient operation, I finally had to tell him why we were so good at all this.”

With some passion, Dan recalls a surprising encounter that both inspired him and propelled him forward in his career. During one of the hurricanes in North Carolina, he was riding in a car with FEMA (Federal Emergency Management Agency) Director James Lee Witt, who was down for a tour of the affected area. Expecting formality from a government official, he instead got bonding from a man intensely interested in how smaller communities deal with disasters like this. On a stop at a fire station, over bologna sandwiches and Pepsis, they shared stories, Dan says, “like old fishing buddies talking to each other. He became a friend and mentor and subsequently invited me to speak before Congressional committees twice over the years.”

In his first time testifying before a subcommittee, by the way, Dan stole the show by departing for a time from the subject of funding hurricanes. He got the congressmen engrossed in how local communities deal with disasters like these. “My family was there, too,” Dan remembers, “and got to meet all the congressmen. It was a memorable day for us all.”

Dan, it seems, was born for this life. He grew up near a fire department, volunteered there at an early age and graduated from Thomas Edison State College in New Jersey with a degree in emergency management. He went to work for a rescue squad in Wilmington and, when the director retired, took over as director of emergency services. The rest is his history of service to Wilmington (for 19 years) and Naples (for 15). It includes work on 19 presidentially declared disaster events. So you’ll see him a lot with his game face on for all this serious duty. But know, too, he savors those lighter moments that get him through the toughest of times.