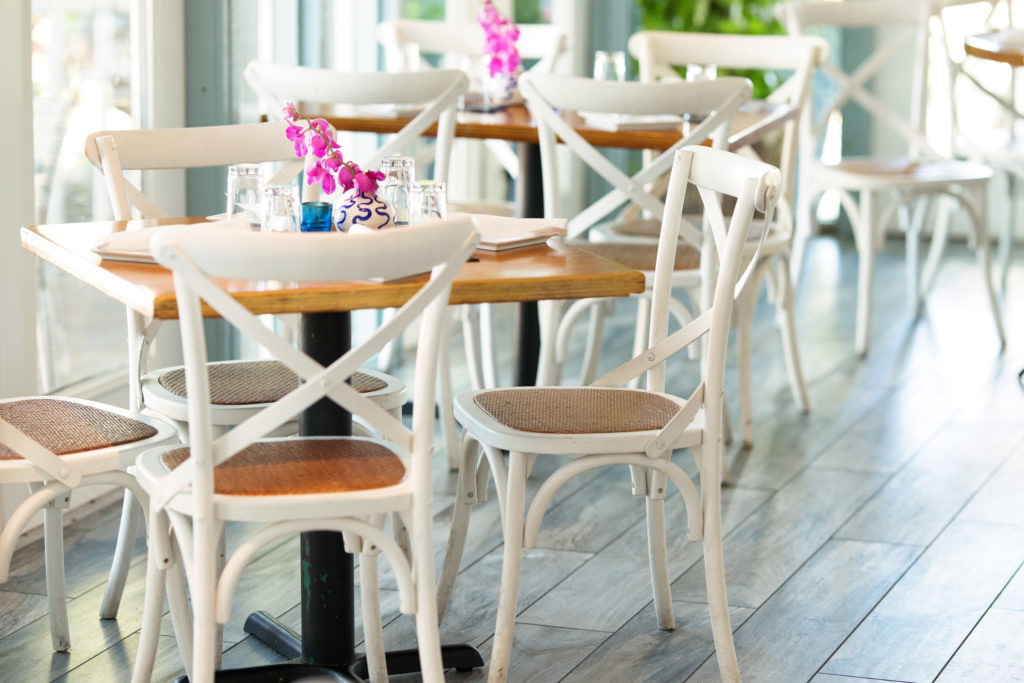 There’s a lot to catch up on in the Southwest Florida dining scene. Throughout the past year, we said goodbye to restaurants, including Sanibel’s Il Tesoro, and hello to a number of new restaurants, like the already-crowd-favorite Seventh South Craft Food + Drink; some of our favorite locales garnered national attention (notably, Barstool Sports, known for its viral “One Bite” pizza reviews, scoped out three local pizza joints, giving them high rankings on its famously tough 10-point scale); and local restaurateurs upped the ante on innovation and service, demonstrating the resilient spirit of our culinary community through the pandemic. As for what comes next, we’re most excited about all the new places to indulge. Here, we present our curated list of the 12 must-try, new restaurants in Southwest Florida.

This casual-chic spot, from respected restaurateur Richard D’Amico, used to be D’Amico & Sons, until he decided to reinvent the space last November with a name and design that honors his late border collie, Ziggy. With glossy interiors and a lush patio in the Neapolitan Way Shopping Center, the restaurant serves small plates, customizable pizzas, burgers, lobster rolls, Nashville hot chicken, and mac ’n’ cheese. At its Calacatta-marble-topped bar, you can order from a short list of stellar craft cocktails and an impressive 29-bottle whiskey collection. Given its namesake, it’s no surprise that the patio at Ziggy’s is pet friendly. Open daily for lunch and dinner.

Two industry pros, a chef and a bartender, came together to create this stylish restaurant that shines equal light on handcrafted cocktails and from-scratch meals. At Seventh South, locals rave about the meatballs, which evolved from the recipe of chef-owner Adam Nardis’ grandmother. For the cocktail program, bartender-owner Barry Larkin transforms premium spirits and homemade syrups into inventive libations. The kitchen stays open late (last call is just shy of 1 a.m.), so you can grab a bite with your nightcap. Open daily for lunch and dinner.

Jeremy Vincent opened this tropical oasis in the midst of the pandemic as a pop-up at the former Redfish Point restaurant. Following the instant popularity of the locale, Vincent decided to turn Jungle Bird into a permanent locale, taking over the Redfish space. There, he honors tiki culture traditions with authentic flavors and quality rums from around the world. The kitchen is intensely focused on fresh ingredients (they don’t even have a walk-in cooler), which chef Nick Hartmann transforms into multicultural dishes like steamed bao buns and yuzu tuna steak. Open for lunch and dinner Monday through Friday, with brunch on Sundays.

This casual concept from Jeramie and Debra Campana, who run Sanibel’s go-to catering and to-go-meal company Paper Fig Kitchen, and partners Don (who was nominated for a James Beard Foundation Rising Chef Award in the ʼ90s, losing to celebrated chef Bobby Flay) and Cleta Yamauchi, serves Mexican-inspired dishes in a fun, family-friendly setting. Check out 400 Rabbits’ playfully named plates like the Queso We Good? cheese-dip starter; the I’m Ok… Churro K? dessert cocktail; and the fitting I’m Bored kids’ quesadilla. It’s a great pitstop for islanders trekking the Rabbit Road Bicycle Trail—and it’s totally worth a drive over the causeway if you’re on the mainland. Open daily for lunch and dinner.

Chef Everett Fromm is a big fan of hogfish, so much so that when the restaurant reopened after renovations last fall, he and his partners changed the name of Island Gypsy at Naples’ Park Shore Resort to Hogfish Harry’s. In the kitchen, Fromm dreams up countless ways to prepare the sweet fish, including crispy and fried in a sandwich for lunch and grilled with pineapple-ginger reduction at dinner. Of course, it’s not just hogfish; you can also enjoy Caribbean-spiced baby back ribs, Black Angus filet of beef and other seafood entrees, plus happy hour bites like hogfish sliders. Open daily for lunch and dinner, until 9 p.m.

Locals are no strangers to Vincenzo Betulia’s Naples institutions, including Osteria Tulia and The French. This spring, he debuted a second location of his popular Bar Tulia at Mercato. The industrial-meets-Old-World space includes a 75-seat patio shaded by a jasmine pergola, and the menu follows the same principles as Betulia’s other locales, with gourmet plates and craft cocktails. Open for lunch and dinner until 11 p.m. Saturday through Wednesday, and midnight on Thursdays and Fridays.

This quirky new concept from chef Michael Voorhis, formerly of Lake Park Diner and The Bevy in Naples, and Calvin Joiner, owner of Red’s Pizzeria and Red’s Pizza on Wheels in East Naples, serves gourmet pies and craft brews. Popular Twisted Sheep dishes get creative, including the Adult Lunchable charcuterie tray with prosciutto, basil-whipped brie and garlic crostini, and pizzas like the Cuban-sandwich-inspired Little Havana and vegan Pizzatarian,. Pick a seat in the hipster-esque interior or grab a table by the vintage food truck out back (complete with an Instagram-worthy neon ‘Pizza’ sign). Open daily for lunch and dinner.

Oxbow Bar & Grill in Fort Myers
One of five new, standout restaurants at the new Luminary Hotel & Co., Oxbow’s two-story space offers picturesque views of the Caloosahatchee River. Housed steps from the main hotel in a previously underutilized, city-owned space, the restaurant stands as a glimmering example of Fort Myers retaking its waterfront for public enjoyment Upstairs, there’s an event space for up to 150 guests, plus a patio and catering kitchen. The restaurant has seating inside and out, where guests dine on oysters (available fried, baked or raw), Southern-spun dishes (like a perfect fried green tomato salad with lump crab) and mains that draw from the best of the land and the sea. Inside the hotel, you’ll find the upscale casual seafood restaurant Silver King Ocean Brasserie, and rooftop bar Beacon Social Drinkery. Oxbow is open daily for lunch and dinner, with brunch on the weekends.

Saigon to Paris Cafe in Naples

Saigon-native Danny Tham, who grew up in France, wanted to marry his two cultures with this coffee shop-meets-restaurant in Central Naples. Nestled in the industrial park off Airport-Pulling Road, Saigon to Paris’ black and red facade is accented by a human-size Eiffel Tower that instantly sets the scene. Inside the tiny cafe, you’ll find a service counter with cases of French pastries and baked goods—crafted by bakers that start before the sun rises—and a menu board with options for Vietmenese classics like pho and roasted duck, as well as French staples like escargot and chicken cordon bleu. Open daily for breakfast, lunch and dinner.

The Loft at OT in Cape Coral

Just upstairs from the Cape’s Overtime Pizzeria, this 21-and-up spot is all about the nightlife with dim lighting and plush seating. The Loft is known for its signature cocktails, like the cranberry Moscow Mule and lavender martini, but you can also grab a quick bite from the tapas and dessert menus. Keeping in tune with its night-on-the-town vibe, there’s usually live music, too. Open late on Wednesdays, Fridays and Saturdays.