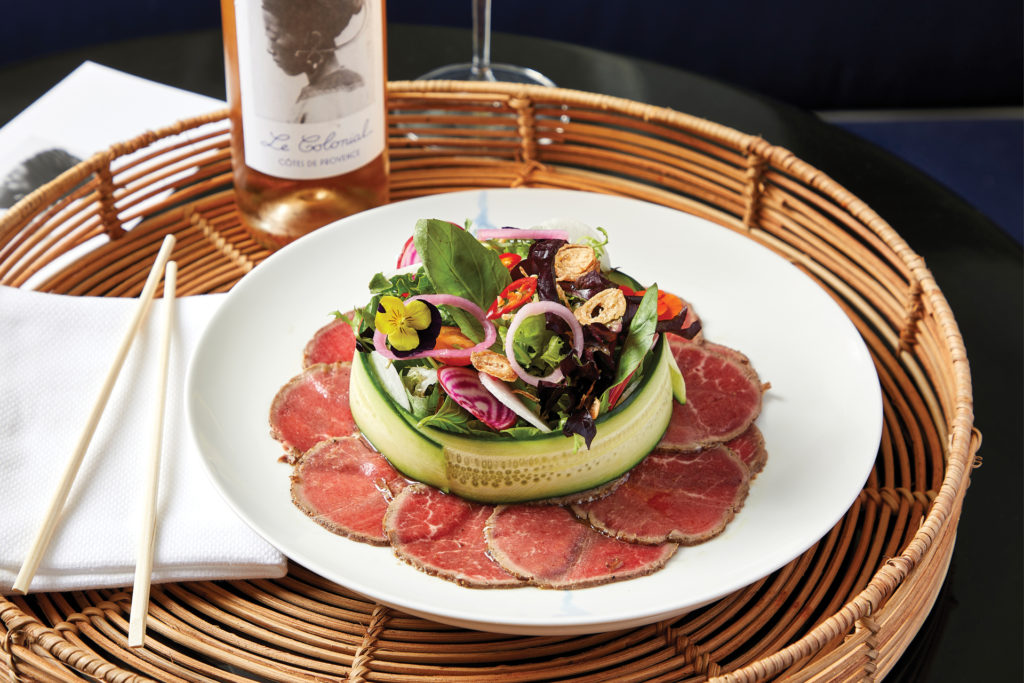 Butcher Private
You’ll need to be a member (or the lucky friend of one) to nab a table at this North Naples steakhouse from Sails Restaurants’ Corinne Ryan and Veljko Pavicevic. Clad in wall-to-wall wine cabinets, French oak parquet flooring and gleaming Greek marble, the private club—slated to fire up its wood-burning grill in early 2023—sources rare cuts of beef, presented with the same artistry and white-glove service diners expect from Sails. Don’t miss the Portoro—a sustainable, luxuriously marbled Australian beef that Butcher will be among the first restaurants in the United States to import. Pair it with wine from the impressive 80,000-bottle cellar.

Le Colonial
Like its lauded locations in Chicago, Atlanta and Houston, the Naples Fifth Avenue South iteration of the French-Vietnamese Le Colonial promises 1920s Saigon style. Expected to open in the first half of 2023, the restaurant’s palm-punctuated dining room is the backdrop for modern Vietnamese fare that goes beyond pho and bánh mì. Sip a Grey Goose lychee martini under the retractable navy awning, then tuck into delights, like the crispy red snapper with chili, garlic and fish sauce.

LoLa 41
The wide-ranging flavors of countries along the 41st parallel—such as Japan, Italy and the United States—comprise the menu at the 225-seat LoLa 41, coming to Ninth Street this spring. Named for the longitude and latitude of its Nantucket flagship (there’s also a Palm Beach outpost), the restaurant leans heavily into its Asian-inspired dishes, including sushi rolls and signature lobster fried rice. The bar program keeps with the latitudinal theme, too, with cherry blossom martinis, yuzu liqueur-spiked spritzes and sake.

The Med
Chic Old Naples restaurant Veranda E has a new Francophile cousin in the Bayshore Arts District. Owner Mary Brandt transformed the former location of Sicilia into The Med, complete with oh-so-Mediterranean whitewashed walls, blue shutters and a petanque court in the outdoor courtyard. The menu focuses on family-style dishes and draws on the flavors of Greece, Italy and the south of France—plus plenty of rosé and bubbles. Hurricane Ian delayed the expected September debut, but The Med still plans to open its doors this fall.

Rebecca’s
Rebecca Maddox—founder of Three60 Market and Celebration Park in Naples’ Bayshore Arts District—shakes things up again in the neighborhood with a contemporary wine complex this fall. The two-part oenophile emporium is complete with a wine club, The Maddox, and Rebecca’s, a wine shop and gourmet market. While the Maddox is only for dues-paying members, Rebecca’s welcomes all, with its marble-clad 40-foot bar and the same modest $3.60 markup on all vinos (regardless of wholesale price) found at Three60.

The Syren Oyster & Cocktail Bar
Restaurateur and hotelier Peter Tierney keeps bringing us new restaurants. This fall, The Syren opens in the former Wharf Tavern space on Tenth Street South, with sustainable Gulf seafood, like mullet, sheepshead and tripletail. Anchoring the remodel is a raw bar, with oysters and chilled crustaceans on ice, and a selection of ceviche and crudos. Next: The Churchill Library at Bellasera Resort, a piano lounge inspired by classic hotel bars like Bemelmans Bar at The Carlyle in New York, serving cocktails and desserts.