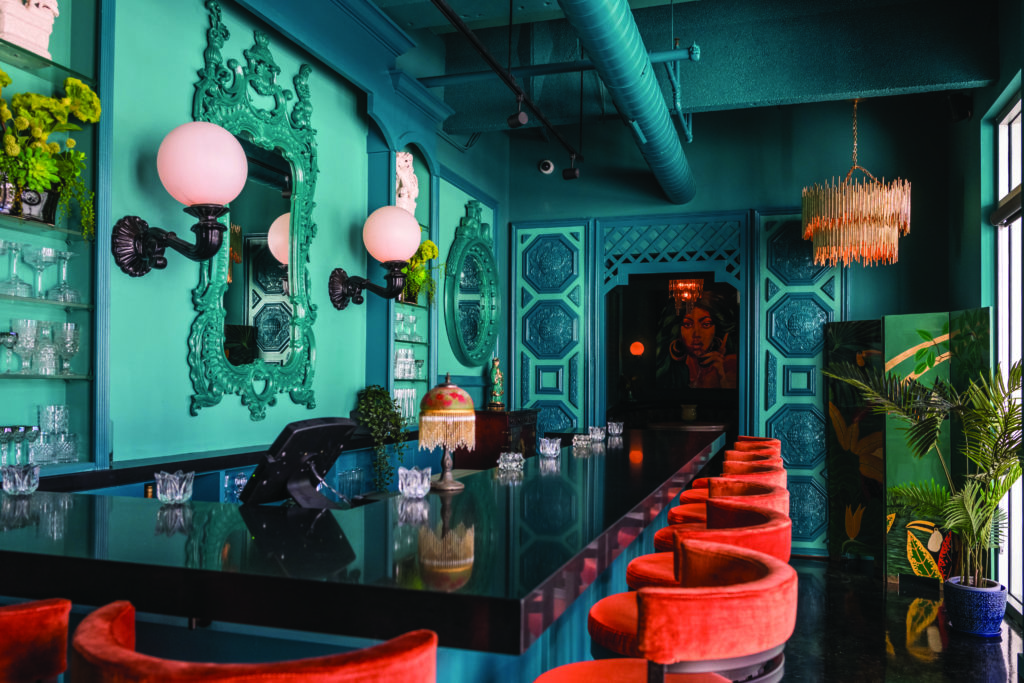 In March, Caitlin Emery-Schewe and Brandon Schewe, the energetic team behind Downtown Coffee and Wine Company, opened their long-awaited fine-dining concept off Old 41. Inside, the 12-seat bar and small dining room lean baroque with jewel-tone walls and fabrics, Palm Beach regency art and furnishings that were mostly thrifted from around Southwest Florida and gold-accented lighting that adds a dose of Art Deco cool. While the interiors are intimate, an extensive patio nearly doubles the seating.

The succinct menu comprises small, shareable plates and a handful of larger entrees, both of which layer complex flavors, often using ingredients that are made in-house. Rustic, housemade lamb sausage features in the flaky, wood-fired flatbread with arugula, feta, pickled red onion and dill cream. And lobster buns are dressed with the restaurant’s tarragon aioli and kimchi-style cucumbers and celery.

Brandon, who previously cooked at The French and LaPlaya Beach & Golf Resort’s BALEEN, focuses on technique and quality. And, though his flavors span the globe, each dish is squarely rooted in the Sunshine State, with Florida hardwood oak used to grill the bounty he gathers from local farmers and fishers. “Reflections of the season will be highlighted in the ever-changing menu,” he says.

On the beverage side, the 10-bottle wine list highlights handpicked selections from lesser-known wineries, while the craft beer menu showcases some of Florida’s finest, like St. Pete’s Green Bench Brewing Company’s Sunshine City IPA and Bradenton’s Motorworks Brewing’s Adoptable Lager. Without a full liquor license, the Schewes are capitalizing on the low-ABV cocktail trend for drinks like the Downtown Dream, which blends local Grumpy Goat cold brew with Lillet Blanc, vanilla and coconut-orange crème.